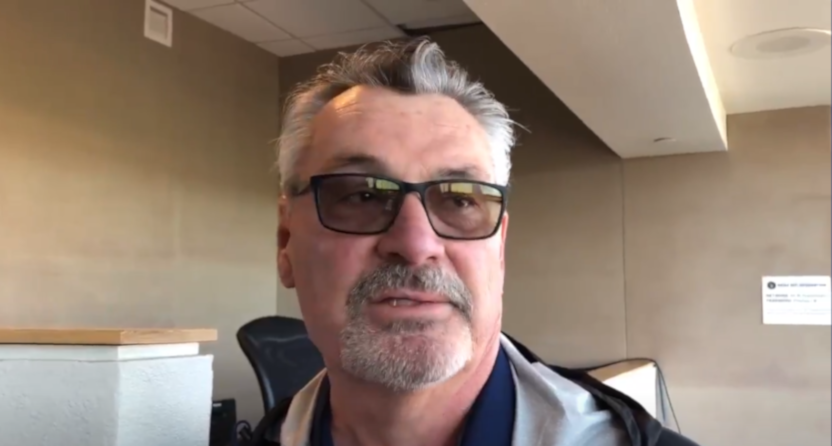 The Milwaukee Brewers’ TV booth on Fox Sports Wisconsin will look a little different this year for spring training and the start of the season. Primary analyst Bill Schroeder, who’s in his 26th season of broadcasting with the team after playing for them from 1983-88, underwent heart surgery in December. He’s recovering well, but will have a reduced workload in spring training and the early part of the season, and will skip some early road trips.

Here’s Schroeder talking about this Thursday (the day of the Brewers’ first spring training broadcast on Fox Sports Wisconsin) with MLB.com’s Adam McCalvy:

He’s doing great, but will get an assist this spring and early in the season from Jeff Cirillo, Geoff Jenkins, Jerry Augustine and others. pic.twitter.com/4fNL5h55IK

“I never knew that I actually had a problem with my heart. Starting about midseason last year, I just kind of felt tired all the time, not to the point where I couldn’t get out of bed or anything, but I just wasn’t feeling 100 percent. And I just figured ‘You know, I’m getting a little bit older, and the season is long.’ And then the offseason came around, I was resting, I was sleeping well, and I’d wake up and I was tired, I felt exhausted. And towards the end, after Thanksgiving, I was dragging garbage cans back and forth and had some tightness in my chest and didn’t think anything of it, I just figured ‘Oh, well.'”

“But I went in for my annual prostate exam/physical, and Dr. [Craig] Young, the Brewers’ doctor, did a pretty good job of identifying that my heart was skipping beats and it was irregular, and my blood pressure was like 170 over something. And they took it again and it was down to like 160 over something, it was still ridiculously high. So he called Dr. [James] Kleska, he did an electrocardiogram, and found that I was born with a birth defect in my valve. I had a bicuspid valve. You know, your heart has three flaps, valves, and two of them were fused together when I was born.”

“And over time, it just calcified, it wasn’t working, and about only half of the blood that was supposed to be spitting out was going out, and some was going back in and enlarging my heart. My aorta was getting big, so I had an aneurysm in there. And three days later, I was on the operating table. They said  ‘You need a valve and you need it right away.’ It was Dr. Kleska, and when Dr. Kleska speaks, you don’t ask questions, you just kind of lay there and let him do it. But I’m very fortunate. If it wasn’t detected, these aortas, they call them the widowmakers. They burst, and you’re pretty much gone.”

That’s frightening stuff, but it’s good to hear that it was caught in time and that Schroeder is recovering well. But he’s going to take a lighter workload early on, and that’s going to lead to some more appearances from others, including former Brewers’ infielder Jeff Cirillo (who played for the Brewers from 1994-99 and 2005-06, and is the team’s all-time leader in batting average with a career .307 mark) and former outfielder Geoff Jenkins (who played for the Brewers from 1998-2007). Jerry Augustine (who played for the team from 1975-84 and is currently a studio analyst with Fox Sports Wisconsin) will do some in-booth work as well, as will Doug Melvin (the Brewers’ GM from 2002-15, currently a senior advisor with the team). Schroeder expects to return to a regular schedule later in the year, though, and it’s good to hear that he’s feeling well enough to plan on that.