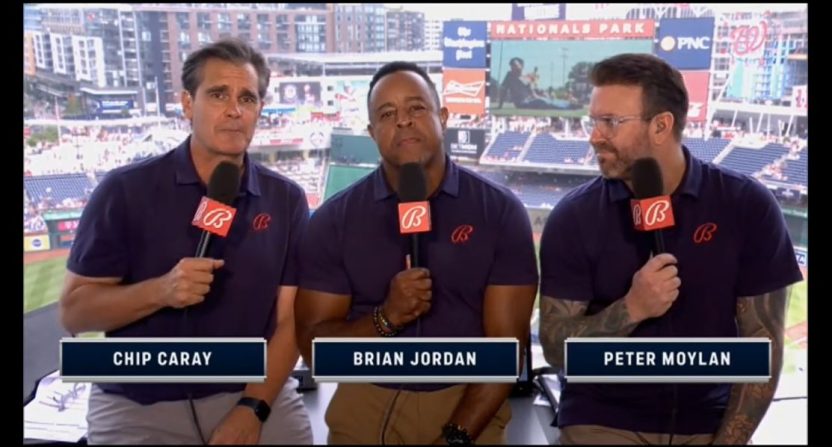 During the Atlanta Braves’ 7-3 loss to the Washington Nationals on Sunday afternoon, the best hitter-versus-pitcher duel may have occurred in the Bally Sports Southeast broadcast booth.

Shortly after Braves superstar Ronald Acuña Jr. took a 75mph breaking ball off the fanny, analysts Brian Jordan and Peter Moylan had a major difference of opinion over the intent from Nationals’ pitcher Steve Cishek.

Peter Moylan calls Brian Jordan out on his nonsense. pic.twitter.com/YSV7h2pVUM

“You’re telling me that Cishek was trying to hit Ronald Acuña in the backside with a 79 mph slider?” said Moylan, a retired relief pitcher. “79 mph off the butt cheek is not something Ronald’s gonna be concerned about. 91, back-to-back inside, then I’d have something to say about it.”

“As a hitter, I don’t even want you throwing in,” said Jordan, a retired 15-year outfielder. “I know you gotta do it, but do it in a respectful way down and in, not throwing me back off the plate almost every pitch.”

“I don’t care if you roll it up there,” Jordan argued.

“But you should care!” Moylan continued. “Because you’re not trying to hit someone with a breaking ball, BJ. You never, ever as a pitcher, ever, are gonna try to hit somebody with intent with a spinning breaking ball. First of all, it’s too hard to control. And if you hit him with a purpose, you want to make it hurt.”

Jordan’s analysis has received a lot of criticism from Braves fans on social media this season. And while claiming Cishek was intentionally throwing a 75mph breaking ball at Acuña seems like an egregious accusation, Jordan offered the audience a great portrayal of the emotion a hitter feels during the game.

Some local networks pack the broadcast booth with too many voices at times, making it hard to find chemistry especially as they rotate through a cast of analysts. But this mildly-heated exchange exemplified the benefit of having both a former pitcher and hitter in the booth to provide two different perspectives. Also, nice job by Chip Caray staying out of the way for a couple minutes, allowing Jordan and Moylan to engage in this debate.