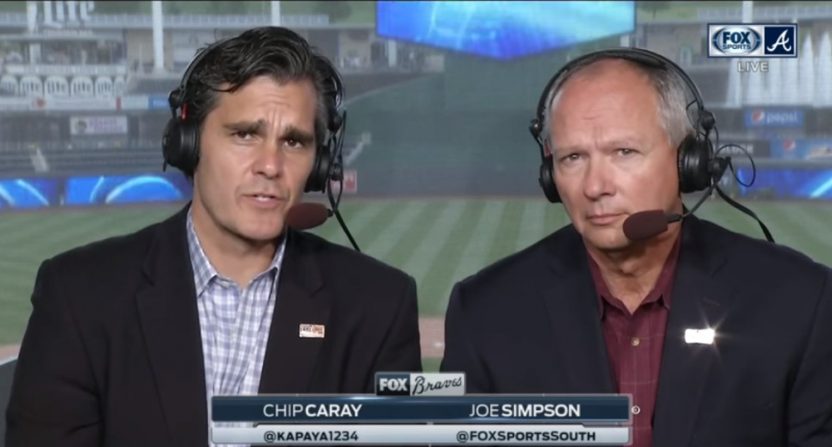 Atlanta Braves’ television analyst Joe Simpson has been making plenty of headlines recently, and not for the best reasons.

Last June, Simpson criticized the Braves’ own organist for continuing to do his job while the home team was losing 7-0. That drew a few question marks because… well, it’s not too often that organists draw fire from their own announcers.

In July, Simpson made more national news when he went on a rant against the Los Angeles Dodgers for wearing t-shirts and shorts during batting practice and calling the team unprofessional. That drew backlash from plenty of people, including Dodgers manager Dave Roberts, and Simpson eventually apologized.

Now that it’s August, another remark by Simpson is drawing scrutiny. It happened in Tuesday’s Braves game against the Nationals. 19-year-old outfielder Juan Soto has gained a lot of hype for the Nats, even as potentially “the best teenage hitter in history.” Soto has 13 home runs and 37 RBIs in 66 games and his .980 OPS would rank fifth in all of baseball if he qualified. Today against the Braves he became the first teenager since Robin Yount in 1975 to reach base five times in one game.

With Soto at the plate, Simpson out of the blue brought up a question about his age and whether or not Soto was really 19 years old, even though there’s no evidence or even hint of suspicion that he’s not 19. Simpson said, “If he’s 19, he has certainly got his man growth. He is big and strong.”

Here’s the video via @DCBarno:

Again, Simpson has found himself in the middle of a controversy of his own making. And he has yet another MLB franchise displeased with his analysis. Ken Rosenthal of The Athletic reported that Simpson was confronted by Nationals GM Mike Rizzo after his remarks about Soto’s age in between two games of a scheduled doubleheader. The latest Simpson controversy also made the rounds on social media.

Age fraud hasn’t been a thing in Latin America in nearly a decade. But then again Joe Simpson is stuck in the past, so it’s not a surprise that he proffers this sort of garbage. Ignore it.

I haven’t heard any evidence at all that his age is wrong, and just assuming it is based on his performance is just a little bit ridiculous https://t.co/XGdTb2kugP

Joe Simpson isn’t in the business of making friends these days. https://t.co/8aK9GrEgqN

According to Rosenthal, Simpson addressed his comments about Soto in the second game of the doubleheader saying that he was indeed a “bonafide 19” and that he should win the Rookie of the Year Award. While not technically an apology, it certainly seems to be an attempt at damage control. One would think Simpson would be a little more careful in what he says after the whole Dodgers kerfuffle, but perhaps not.

At this point, the question seems to be which franchise Simpson will start a feud with next.