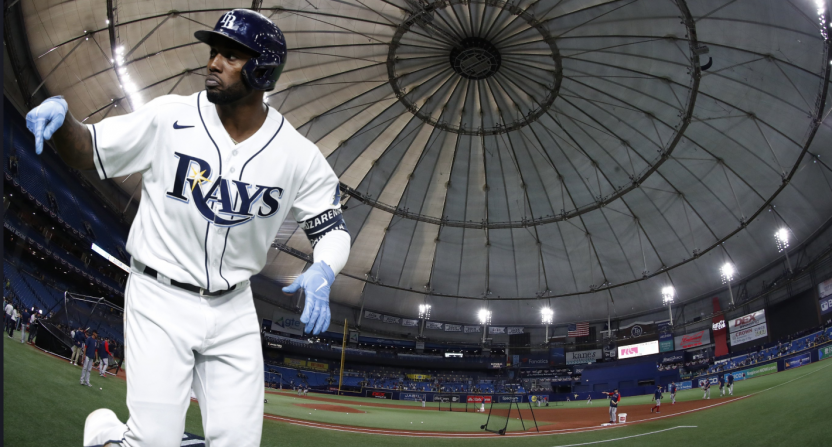 Or the Rays are just that much better than Boston right now. After all, Tampa Bay finished with the league’s best record at 100-62 and eight games ahead of the Red Sox in the AL East.

But getting dispatched so handily apparently made some of the media covering the Red Sox a bit irritable. Or salty, to use the popular vernacular.

The Athletic’s Steve Buckley, who’s previously covered the Red Sox for 24 years as a columnist for the Boston Herald, chose to snark on the Rays’ home ballpark of Tropicana Field for his account from Thursday’s Game 1. Insisting that he didn’t intend to disrespect the defending AL champions, Buckley scrutinized the one aspect of the Rays that’s open to criticism.

“By now, we’re all familiar with the infamous “catwalks” that crisscross the playing surface high above Tropicana Auditorium. And we’ve all watched games, either in person or on television, when balls have either clanged off one of the auditorium’s notorious catwalks or been completely, hopelessly lost by the fielders.”

Buckley singled out a hard hit by Tampa Bay’s Nelson Cruz that was deemed a home run because it hit the “C-Ring” catwalk of Tropicana Field, rather than go over the fence or even stay in play to give Boston outfielders an opportunity to make a play.

But is ripping Tampa Bay’s ballpark (an opinion held by many) taking away from how accomplished these Rays are? At least a couple of observers saw it that way.

Yet Buckley wasn’t the only person in Boston media making snide remarks toward the Rays Thursday night. The Red Sox’s radio broadcast team of Joe Castiglione and Will Flemming didn’t care for how Randy Arozarena celebrated his fifth-inning home rum that extended Tampa Bay’s lead to 4-0.

In what is absolutely the most Boston fan thing I can imagine, their radio team simply would not stop talking about Randy Arozarena celebrating his home run: pic.twitter.com/e9cqlVlMgX

“He just had a spin move, as if he were going up for a slam dunk,” said Castiglione. Flemming added that Arozarena stood for about five seconds admiring his deep drive into the left-field seats before Castiglione derided the Rays’ slugger for pounding his chest and flipping his bat, then doing push-ups and flexing his bicep in the Tampa Bay dugout.

Was Arozarena’s celebration excessive? Maybe so, from a Red Sox supporter’s point of view. But isn’t a player allowed to show some emotion after a big hit in a postseason game? Arozarena is hardly the first to watch a home run leave the park and flip his bat.

Might try to get a laundry cart ride each time I finish an article… pic.twitter.com/x9sgVOqMzQ

And the push-ups were done in the Rays’ dugout. Is that really any worse — or less playful — than Boston giving players a ride in a laundry cart after a home run?

But Castiglione and Flemming were much more gracious and admiring when Arozarena stole home in the seventh inning to increase Tampa Bay’s lead to 5-0.

Making such a thrilling, daring play in a postseason game — something you rarely see during the regular season — had to be acknowledged for how special it was. No opportunity for standing and watching or flipping a bat on such a play, so there was nothing to criticize. No word on push-ups in the dugout, however.

[Thanks as always to Timothy Burke for getting the audio no one else can and making it available for all to enjoy.]