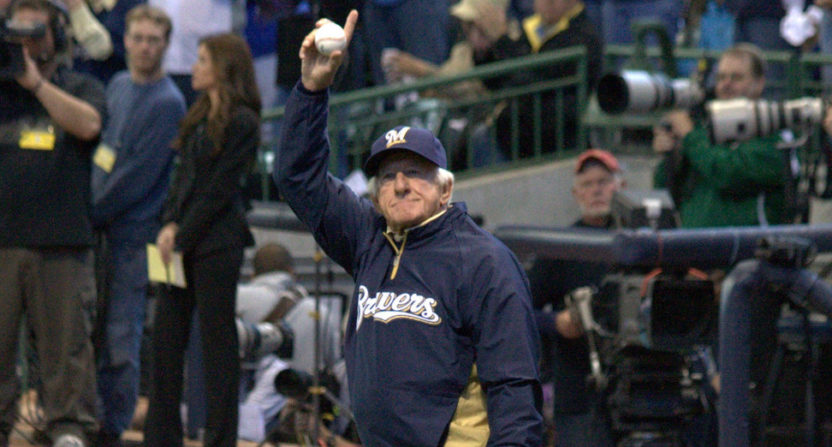 It takes more than a dangerous spider bite to stop Bob Uecker. The Milwaukee Brewers’ 84-year-old radio voice is back in the booth for a 48th season (and his 63rd overall in baseball) despite a late October bite from a poisonous brown recluse spider, a bite that had Uecker recovering for eight weeks. He was bitten when changing a lightbulb at his Scottsdale home, but only noticed a mark the next day, and only went to the hospital to get checked out a few days later.

As he told Tom Haudricourt of The Milwaukee Journal-Sentinel, that bite (from one of the most dangerous house spiders in North America) led to an eight-week process involving surgery, a bacterial infection and more, but it hasn’t kept him down:

“We were laughing about it on the air,” he said. “I said the spider didn’t ‘recluse’ himself from biting me. That was a good one.”

This is just the latest major health issue for Uecker, and far from the most serious. Haudricourt describes the many others he’s run into over the years, a 1991 aortal aneurysm, a 2009 leaking aortic valve, 2009 pancreatic tumors, a valve replacement, a staph infection and more. But Uecker says he’s fine despite all that,  he’s still planning to call around 100 games this year, and he’s going to keep working as long as he’s capable.

“I know I’m lucky. I’ve had 11 major surgeries overall. But, through all of that stuff, I made some unbelievable friends. All those doctors at Froedtert. We’re all friends now. So, a lot of good came out of it.

…“I’ve never had a contract. They call it a handshake agreement but we don’t even do that. We don’t say anything. [Owner Mark Attanasio] takes care of everything. It’s just understood I’m coming back. We don’t have to say it.”

Ask Uecker how much longer he’s going to do this and he always gives the same answer. As long as he’s physically capable and mentally sharp enough to continue, he will. He has no intention of being a doddering fool in the booth who didn’t realize when it was time to exit.

“I’ll know when it’s time,” he said. “I would never embarrass myself or the club. I have a standard.”

It’s a pretty high standard, as Uecker’s broadcasting has won him countless fans around the majors. And that’s to say nothing of his many appearances in pop culture, from the Major League movies to a recurring role on Mr. Belvedere to Miller Lite commercials and cameos in  O.C. and Stiggs, Fatal Instinct, Who’s the Boss?, D.C. Follies, LateLine and Futurama. Uecker’s still drawing high praise from fans and from broadcast partners like Jeff Levering (who calls Uecker a “true entertainer” in Haudricourt’s piece), and he’s still highly identified with the Brewers and with MLB in general.

So while that spider may not have “reclused” himself, it’s a good thing for baseball fans that he wasn’t able to take Uecker away from the game.

[The Milwaukee Journal-Sentinel; photo from Wikipedia]