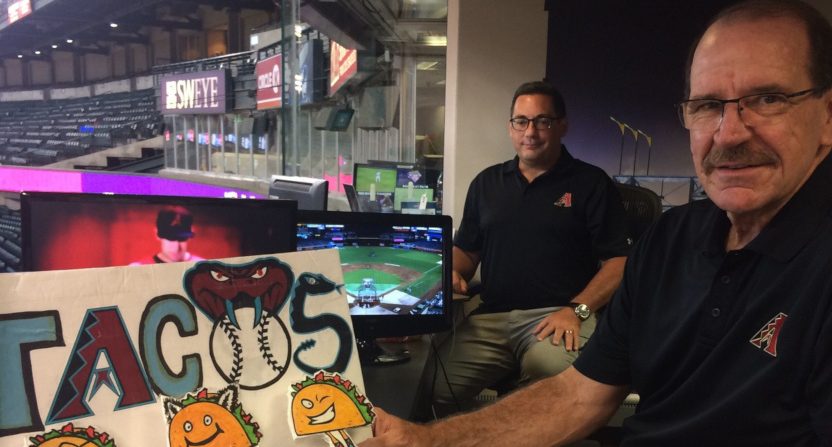 Arizona Diamondbacks’ broadcaster Bob Brenly (currently an analyst for their local broadcasts on Bally Sports Arizona) has displayed quite a pattern of negative comments towards players of color over the years, with the latest issue there coming from his crack about Marcus Stroman’s du-rag Tuesday. That drew wide backlash, including from Stroman, and Brenly (seen at right above on an Aug. 15, 2019 broadcast) put out a statement Wednesday claiming his commentary was “a poor attempt at humor,” but also saying he’d apologized directly to Stroman and would take sensitivity training.

That statement was notable for not including any absences from upcoming broadcasts, though. And Brenly has now added that he’ll take a week off  “to listen, reflect and devote my attention to awareness training related to diversity and inclusion to enhance my understanding and appreciation of others” following further criticism (on Twitter and then in print) from former Cubs’ star Aramis Ramirez, who accused Brenly of repeatedly going after Latino players during his time as a Cubs’ broadcaster (2004-2012). Here’s what Ramirez told Zach Buchanan of The Athletic (in a joint interview with Ramirez’s agent, Paul Kinser):

“It felt weird because every time he attacked somebody, it was a Latin player for some reason,” Ramírez said of his time in Chicago.

…Ramírez, now 42, said Brenly said: “I never got a clutch hit, that I was a numbers stacker.” Brenly made similar comments on a local radio show in October 2011, calling Ramírez a “numbers gatherer” who “gets hits stats at the end of the year” but who had “fallen off the face of the earth” defensively and who “kills you” on the bases.

“It’s hard to think back recently, especially last year, and remember any big RBIs that he had or any period of time where they won a lot of games because of the way Aramis was swinging the bat,” Brenly said at the time.

…Ramírez feels Brenly’s harsh criticism cannot be separated from the color of his skin. “He went after Starlin Castro pretty hard, Geovany Soto pretty hard,” Ramírez said. He said he could not recall Brenly criticizing any White players. The former Cub also said he never experienced anything like that at any of his other stops in baseball. In addition to playing for the Pirates, he also spent four years with Milwaukee.

“You know what’s surprising about that stuff? I never had a racial problem before in my life in the States, before Brenly or after Brenly,” Ramírez said.

And here’s the full statement from Brenly that Buchanan includes at the end of his piece:

I want to apologize again for my insensitive reference on Wednesday, as it does not reflect my values or who I am. With respect to Aramis Ramírez, Starlin Castro, Geovany Soto and all of the players who I have covered over the years, I have the utmost respect for their life stories, their talents and their careers. Having played the game and managed for many years, I understand how hard it is to play so successfully for such a long time. My job for many years has been to talk about baseball and I have had thousands of opportunities to both applaud and analyze performances and was privileged to witness the career of players like Aramis Ramírez.

My job is to describe Major League Baseball and to call it the way I see it — the good and the bad. I have always tried to do so in an honest, unbiased way, regardless of a player’s background or race. I am sorry that my work offended Aramis, as I think of him as one of the most successful players of his generation.

Beginning today, I have voluntarily decided to take some time off to listen, reflect and devote my attention to awareness training related to diversity and inclusion to enhance my understanding and appreciation of others. I plan to return to the booth next homestand, hopefully a better person.

Unlike some other apologies we’ve seen recently, Brenly’s comments here still have a whole lot of “I’m sorry you were offended” and not a lot of recognition of what he did to cause that offense. (And he even gets the day when he made that remark wrong; it was Tuesday, not Wednesday.) At least he does admit to his comment there being an “insensitive reference,” but there’s still a lot of improvement that could happen here. It does seem positive that Brenly decided to take this step himself rather than being hit with a suspension from Bally Sports Arizona, but the real proof will be in if this training actually proves meaningful for Brenly, and if he stops making dumb cracks about players of color going forward.