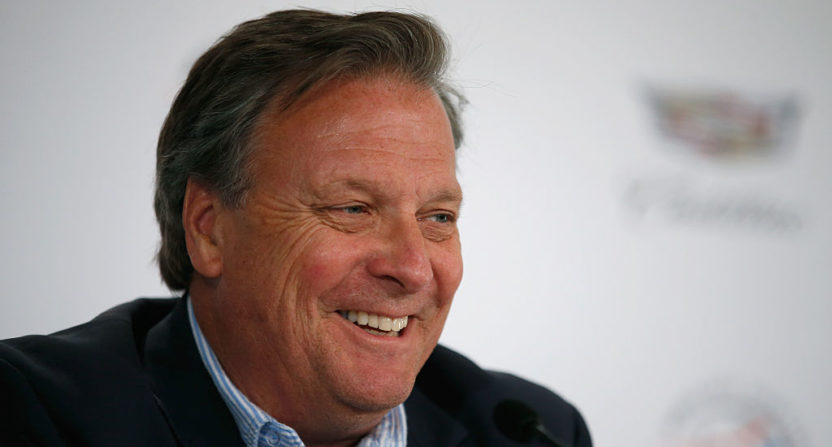 Major League Baseball president of business and media Bob Bowman announced his decision to leave at the end of the year Monday, and that provides a good opportunity to reflect on his legacy over the past 17 years running MLBAM. Bowman had already moved away from running the spun-off BAMTech day-to-day (former Amazon exec Michael Paull was tabbed as BAMTech CEO in February), but he played a massive role in building that in-house streaming technology into a business that saw Disney recently pay a combined $2.58 billion for a 75 percent stake.

Bowman also was vital to much of the rest of MLB’s digital strategy, including MLB.TV, MLB At-Bat, the expansion of MLB.com content and the recent push for in-market regional sports network streaming, and there’s a good case to be made that baseball would be in a far weaker position in 2017 without the efforts of him and his team.

First, here’s a statement on Bowman’s decision not to look for a contract extension:

The biggest and most indisputable success from Bowman’s tenure is the spinoff of BAMTech and the subsequent sale of a majority stake there to Disney. Even if MLBAM did nothing else for baseball at all, that technology and the rewards from its sale brought in a massive amount of income, with just the most recent majority buy providing an estimated $50 million windfall to each MLB team. Of course, plenty was spent on BAMTech before that, but there were big revenues for it before the sale too, especially once outside clients like the NHL, WWE, HBO, the PGA Tour, and ESPN started using its streaming technology.

The NHL went even further than those others, turning its whole digital operation over to MLBAM, and despite some early issues, that’s generally gone well. MLBAM is quite probably the most dominant sports league digital arm out there, and BAMTech’s service is certainly the most dominant streaming sports solution (especially post-Disney purchase). Bowman and his group saw the potential of tech and turned digital into an enormous asset for MLB, and from that perspective alone, his time at the helm deserves a lot of praise.

There are also more subtle benefits to what MLB has done on the tech side. From just a sheer viewership perspective, baseball appears to be in quite a strong position in the current sports hierarchy, with impressive World Series ratings in both 2016 and 2017, to say nothing of other successes in the postseason. Regular-season results weren’t as great this year on the local front, but national games saw a rise, and the local numbers are still solid in the big picture.

And while it’s impossible to specifically say “Ratings are good because of MLBAM,” it’s notable that many have been sounding the “young people don’t like baseball” drum for decades; MLB has seen some issues on that front at times,  but is far from the worst off there, and baseball has certainly made some traction with some younger viewers.

MLB’s digital emphasis has definitely helped there, between their solid and early-adopted streaming service, their embrace of apps and technology like At Bat and StatCast, and the amount of digital content they’ve created. They’ve also set themselves up for success even in a dramatically changing TV landscape, selling some subscriptions over the top with MLB.tv and signing in-market streaming deals as another way to reach younger viewers. It seems likely they’d be in a far worse off place if they hadn’t created MLBAM and hadn’t had Bowman and his team leading the way on digital initiatives.

The rise of MLBAM to the top of the digital ecosystem of sports leagues certainly wasn’t a foregone conclusion. MLB has long been criticized for being more traditional and more resistant to change than many other leagues, and it’s quite possible to imagine a universe where they didn’t invest on the digital side, didn’t bring in someone like Bowman, and didn’t give MLBAM the resources and mandate it needed to thrive. Maybe there, it’s the NFL or the NBA that has its streaming service running everyone else’s, and it’s those teams raking in the windfalls from a Disney purchase. That universe probably still has MLB, but in a far weaker position than our universe, and with even more issues attracting younger fans. By contrast, MLB looks to be in pretty good shape in our universe, and a lot of the credit for that can go to Bowman and the MLBAM team.