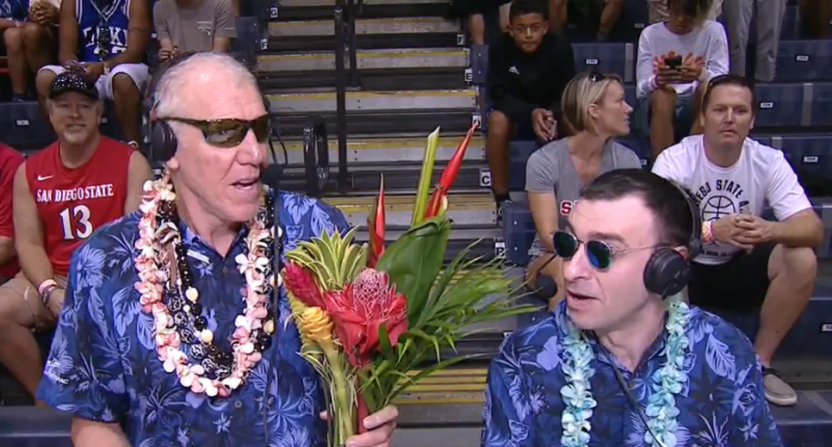 Something you probably never thought you needed in your life: Bill Walton calling a baseball game.

Something you’ll be getting in your life next week: Bill Walton calling a baseball game.

Yes, it’s true. According to the Chicago Tribune, Walton will call a White Sox-Angels game on August 16th with Jason Benetti, the regular White Sox play by play announcer and Walton’s broadcast partner during last November’s surreal Maui Invitational. The broadcast will air on NBC Sports Chicago, and is coming about because Steve Stone, Benetti’s usual partner in the booth during White Sox games, is taking the four game series in Orange County off. Benetti will have substitute partners for the other three games in the set, but Walton is the only one that has been announced so far.

Benetti’s comments about working with Walton are…well, they sound like Walton has implanted some kind of THC-laced worm in Benetti’s head.

“There is nothing more entertaining than working with the neural fiesta that is Bill Walton,” Benetti said. “I’m over the moon about it. When he said yes, there was a fist pump.

“I think it’s amazing. I left Maui having done six games in three days with Bill, and it was a rapturous experience. My mind fired in ways that I never could have imagined simply from being next to him and following the conversation and thinking, ‘Should we do the game right now, or should I follow up with the thing that he just said?’ It was all over the map in the most entertaining way.”

Walton actually threw the first pitch before the Rockies-Padres game at Petco Park on Thursday night. It was….not ideal.

Benetti also gave us a light preview of the broadcast, teasing that Walton might give his thoughts on the Angel Stadium center field rock sculpture (and Mike Trout, and other fish-named people0.

“I know he enjoys baseball,” Benetti said. “I don’t know if he’s sitting at home watching a game every day. But that’s not the point of being around Bill because the cool thing about him is he has ideas about whatever he looks at.

“His perceptual abilities are through the roof. So to have him get a look at (the White Sox) for one night and shower us with his opinions about not just the team but also the rock formation in center field at Angel Stadium and Mike Trout and other people named after fish, I mean, who knows where it’s going?”

Benetti insists Walton is “not just there to be zany. He’s there to get it right and he cares about the people he’s watching. … He’s already sending emails about prep.”

The White Sox also released a couple of quotes from both Benetti and Walton about the experience, and they’re about as absurd as you could imagine.

“Doing a game with Bill Walton is a gift,” said Benetti. “His mind is a playground, an orchestra and a volcano all rolled into one. It is impossible to think of someone who takes the audience and his broadcast partner on more of a journey through the world, and to have that next to me is an honor and a treat.”

When told of Benetti’s comment announcing “this epic, monumental and historic upcoming event of the double millennium,” Walton, found in the desert, in the middle of a massive lava flow, on his bike, on yet another hard climb said, “Whoa! The pressure is on now, but please, set your standards higher, Jason. And here I thought all along I was a trembling and exploding rainbow, morphing into a bus stop. I guess I’m going to have to reinvent myself one more time.

“Anyway, take me out to the ballgame, put me in Coach, I’m ready to play today. California, preaching on the burning shore, California, knock, knockin’ on the golden door. Please, where is the game, what time does it start, who’s playing, what sport is it, and what’s your name again? Give me a chord, and I’m on my way,” Walton said. “I hope the noise in my head is not bothering you.”

You know what the worst part of this is? I live in the Angels’ viewing territory, and won’t be able to stream the broadcast on MLB.tv. Talk about a disappointment.