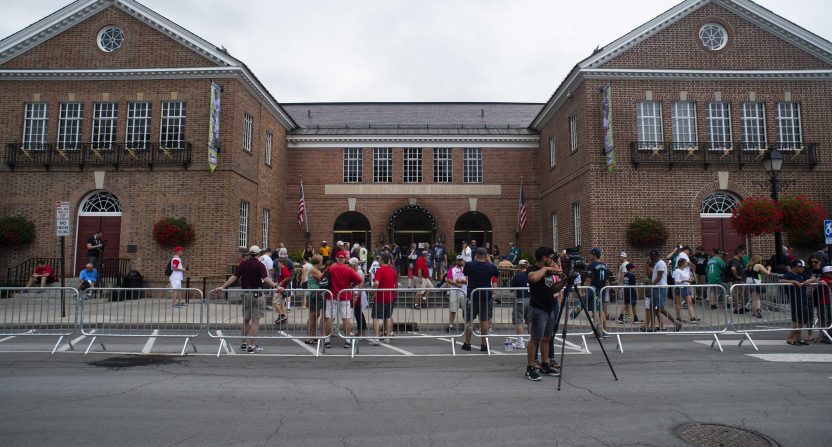 On Friday, the BBWAA announced that the JG Taylor Spink Award would be no more. Instead, the honor, awarded to a sportswriter “for meritorious contributions to baseball writing,” will now be called the “BBWAA Career Excellence Award.”

The BBWAA will remove J.G. Taylor Spink’s name from our highest honor, winners of which are recognized at the Hall of Fame.

The honor is now the BBWAA Career Excellence Award. pic.twitter.com/Vaz7YI2r9R

Here’s the full statement from the BBWAA, via The Athletic.

“This action was not taken lightly,” the statement read. “It was put to a vote after substantial research and conversation with and among members. That research showed, in the words of Ryan Fagan of The Sporting News, that Spink’s Sporting News contained ‘racist language, ugly stereotypes and derogatory portrayals of Negro League players and other Black Americans during Spink’s time as publisher, especially in the era before Jackie Robinson made his MLB debut in 1947.’

“The BBWAA does not feel that Spink’s words and actions upholds our values as an organization nor do they reflect what we should recognize for our highest honor.”

The full vote count was 325 in favor and nine opposed of the 334 votes cast.

Each year, the award winner is honored during Hall of Fame weekend. The 2021 winner was Dick Kaegel, and the 2020 winner (who will be honored with Kaegel this summer in Cooperstown) was Nick Cafardo. Other winners in recent years include Peter Gammons, Tracy Ringolsby, Bill Madden, Roger Angell, Dan Shaughnessy, and Jayson Stark. The award dates back to 1962, when Spink was the first winner of the award that later bore his name.

So, why the name change? The simple answer is that Spink, the former publisher of The Sporting News, was a racist and used his platform at The Sporting News to tout his belief that baseball should remain segregated, while also perpetuating negative stereotypes and portrayals of Black players.

Bob Nightengale of USA Today wrote about Spink’s racism in an editorial last summer, lobbying the BBWAA to drop Spink’s name from the award. Nightengale’s article quotes several former winners, including Gammons, Paul Hagen, and Claire Smith, in supporting the removal of Spink’s name from the award. The Sporting News itself also spoke out in favor of removal, with writer Ryan Fagan clearly and eloquently making the case by simply quoting Spink’s past articles.

This is the second change to an award’s name that the BBWAA has implemented this offseason. In October, the name of Kenesaw Mountain Landis, baseball’s first commissioner, was stripped from the MVP award due to his virulent racism.

To me, the changes are less about “cancel culture” or “political correctness” and more about simply refusing to honor awful people by slapping their name on an unrelated award. Notably, both Landis and Spink had their names plastered on these awards in the year of their death – 1944 for Landis, and 1962 for Spink (as the first winner of the newly-created award). It seems, in hindsight, that those decisions were reactionary and the world (and baseball as a whole) has changed so much in the 59 years since Spink’s death and the 77 years since Landis passed away. In Landis’ time, there wasn’t a team west of St. Louis, and there wasn’t a Black player in the league. The final MLB team integrated just three years before Spink died.

Is it really so controversial to say “hey, let’s not honor people with awful beliefs born a century and a half ago”? I personally don’t think so. And to be clear, Landis and Spink aren’t being removed from history – Landis still has a plaque hanging up in Cooperstown, and Spink remains the first winner of the award that no longer bears his name. Their contributions still happened, but we’ll no longer honor active players and writers with awards named after them. Don’t get so riled up about an award’s name being changed. It still exists, but will just be called something different.