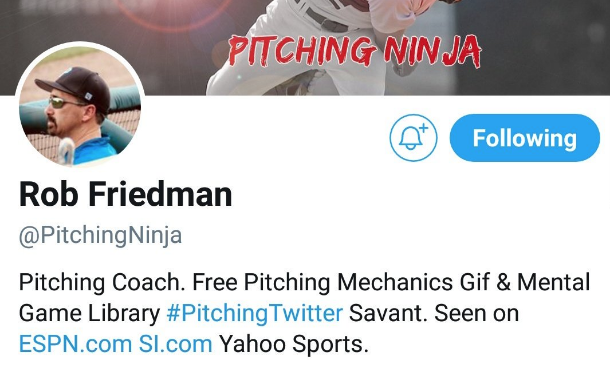 Major League Baseball is known to be stricter than most other leagues when it comes to spreading clips and gifs on social media, forbidding non-league or team accounts from reproducing and sharing any copyrighted content. But even given that reputation, it was a bit surprising this week to see the league apparently go after pitching coach Rob Friedman’s popular Twitter account Pitching Ninja, which shares gifs and videos of notable pitches from major-league games.

@MLB crying copyright & getting a Twitter suspended is so petty. Particularly someone like @PitchingNinja who does nothing but promote how great the game is and how amazing some pitchers are. Man, y'all need to chill. It's 2018. People are going to post GIFs. It's free promotion. pic.twitter.com/8sgpt6X7Q2

Almost as soon as Pitching Ninja’s Twitter account was suspended Monday, an army of baseball fans, writers, and even players expressed their frustration that the league has cracked down on an account that serves mostly to promote the sport. Here are just a few of the many, many angry tweets.

MLB would have been better off giving @PitchingNinja a stipend instead of getting him suspended.

Please tell me the suspension of @PitchingNinja, who shares the fun and awe of MLB pitching through GIFs without detracting from the much broader value of broadcasts, is just a misunderstanding …

.@MLB so let me get this right, you’ve gotten @PitchingNinja suspended from twitter for positively promoting the game and your brand in hindsight? His videos are some of the best things on Twitter. Bogus move.

You have got to be kidding me.

Yo @MLB you are ridiculous. Suspending the account of @PitchingNinja who literally promotes your product around the clock, free of charge, by tweeting pitching gifs. Get a grip.

also, are the really suspending @PitchingNinja for promoting their product for free? not a great business model imo

This makes me sad. No reason to come on twitter anymore. Watching @PitchingNinja videos everyday is not only something I enjoy but also a way in which I learn more about my craft. Please @MLB make @twitter undo this! https://t.co/zTXf9UYPzU

Pitching Ninja’s suspension seems to perfectly illustrate how a league’s efforts to control its intellectual property can undermine its hopes for pleasing old baseball fans and minting new ones. Whereas the NBA has created a thriving online culture by allowing social-media users to share videos as much as they wish to, MLB prevents fans from accessing clips from non-league sources, which limits how far great plays, bloopers and off-beat moments can spread. As writer Jonathan Bernhardt points out, the league chooses short-term corporate valuations over the stated long-term goal of “growing the game.”

But MLB has had those restrictions in place for years. What caused the league and/or Twitter putting its foot down after years of Friedman posting gifs and video? Well, the suspension appears to have originated from a dispute with Barstool Sports personality Kevin Clancy (KFC Barstool). It’s tough to know exactly how the exchange went down, but from Clancy’s tweets, it seems that he posted a video that Friedman had created, Friedman got annoyed, Clancy got annoyed back, and Clancy’s followers wound up reporting Pitching Ninja.

And as baseball fans across the internet mourned Pitching Ninja’s suspension Monday and Tuesday, Clancy gloated.

I have never ever in my life seen more grown men cry about not being able to see pitching GIFs anymore ???. Get over it. Literally everyone on twitter has had to play by MLBs fair use rules, I have no idea why any of you think @pitchingninja wouldn’t have to do the same

What do you expect me to not dance on his grave??? He tries to call me out for stealing and then gets pinched a day later? That’s sweet, sweet internet karma baby

And because life is secretly a giant Barstool-centered reality show, Clancy and Friedman will apparently appear Tuesday afternoon on Barstool Radio to tell their sides of the story.

Pitching Ninja will presumably be allowed back on Twitter at some point, but it’s entirely possible that Friedman will no longer feel free to post gifs and the account’s entire purpose will go away. That, of course, would be a sad loss for baseball fans and therefore, in a very real way, for MLB.