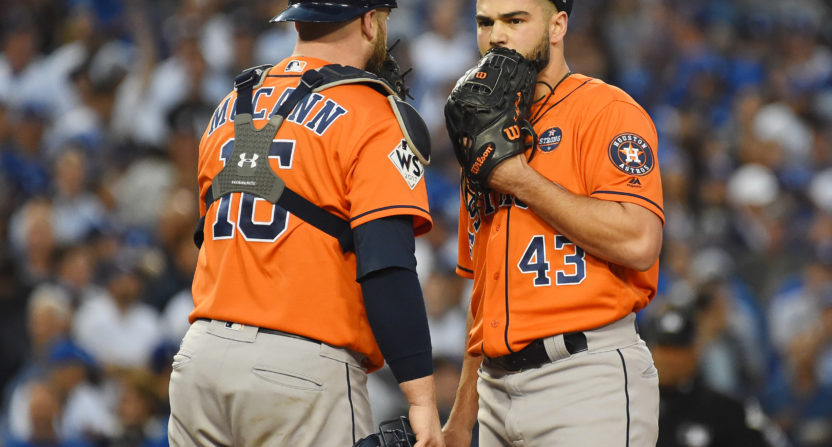 MLB announced its 2018 pace of play initiatives yesterday, and while they didn’t feature a pitch clock as many had expected, there are going to be some noticeable changes.

Chief among them: a limitation on mound visits to six per game, with a few exceptions. From MLB:

I) Mound Visits
1. Number
A. 2018 Championship Season. Mound visits without a pitching change shall be limited to six (6) per team, per nine innings. For any extra-innings played, each Club shall be entitled to one additional non-pitching change mound visit per inning.
B. OBR 5.10(l). Official Baseball Rule 5.10(l), which governs mound visits by a manager or coach, remains in effect (i.e., a pitcher must be removed on the second visit by a manager/coach in an inning).

That’s a pretty big departure, and it’s likely in response to obvious examples of pitchers and catchers abusing their privileges in the 2017 postseason. When Willson Contreras is heading to the mound to seemingly discuss the meaning of life every other batter, it’s a problem.

Interestingly enough, though, this isn’t a new problem. Here’s an AP story from the 2009 World Series, for one example:

All those meetings on the mound called by catcher Jorge Posada and the New York Yankees are giving Major League Baseball pause, too.

Eight times in one inning, almost 10 years ago! This is how ingrained the system was for the current generation of players. Contreras was 17 for the 2009 World Series. They literally grew up with this.

And perhaps it’s that sense of entrenched procedure that led Astros pitcher Lance McCullers Jr. to lash out at ESPN for their coverage of the new rules, and more specifically, their decision to frame the rules as a referendum on Game 7 of the World Series from last year:

@espn displaying mound visits today of GAME 7 in the WORLD SERIES like that’s a standard game. That game decides everything and WE, as pitcher/catcher, have to combat sign stealing (cheating). Y’all never talk baseball, show baseball or care. Save your BS for shitty first take.

Everyone wants to blame pace of play on mound visits or time in between pitches… well MAYBE address the real issue at hand instead of trying to cover it up and forceably insert rules that may affect the integrity of the game and alter the fairness of the game.

Football and basketball tend to feel faster, which is why breaks in those sports (typically for replay reviews) feel much longer than breaks we’ve grown accustomed to in baseball (pitching changes, mound visits, etc.) It’s also why replay reviews in baseball feel like more of an intrusion than the routine breaks we’ve long come to accept. We’re set in our ways as viewers.

The players themselves are also set in their ways, of course. The MLBPA didn’t agree to the new rules, they simply declined to contest them:

After more than a year of negotiations, the Major League Baseball Players Association refused to agree to the changes but also signed an agreement that it will not oppose the rules.

Union head Tony Clark noted the sides technically did not reach a deal.

“The focus on mound visits and/or the level of commitment on the other pieces simply didn’t focus enough attention on the areas the players wanted to address — so no agreement was reached,” he said in an email to the AP.

“While a number of pitchers will acknowledge that some mound visits are unnecessary, a limitation combined with what the experience has been of late in regard to technologically enhanced sign stealing means that there are concerns about how this will work … or not work.”

It’s interesting that McCullers and Clark and so many other people in the game are so focused on the sign stealing aspect, and it’s also interesting that the new system calls for all of the phone lines to various video rooms to be monitored at all times. Is there really that much organized espionage occurring? But moreover, is it even that big of a deal? Would it really threaten the integrity of the game?

McCullers wasn’t thrilled that ESPN chose to display all of his mound visits with Brian McCann from Game 7, and that’s probably an understandable reaction when you’re the person ESPN is showing. But it’s a good example of why players aren’t always the best people to ask about changes like this. He’s looking at Game 7 as the most important game of his life, so of course he wants to feel as comfortable as possible with every pitch.

But MLB is looking at Game 7 as the most important game of the year from a business perspective, and casual fans might look at the game as the only World Series contest they’re going to watch. It’s the biggest stage of the sport, and therefore will be under the most scrutiny. No one’s tuning in to watch Brian McCann jog to the mound repeatedly in an unsuccessful effort to get McCullers through the third inning.

That’s why these changes are in place, and it’s not an unreasonable move for the league. It’s not unreasonable for the players to chafe against it, either. Change isn’t easy, especially at first. Even if it’s for the better.