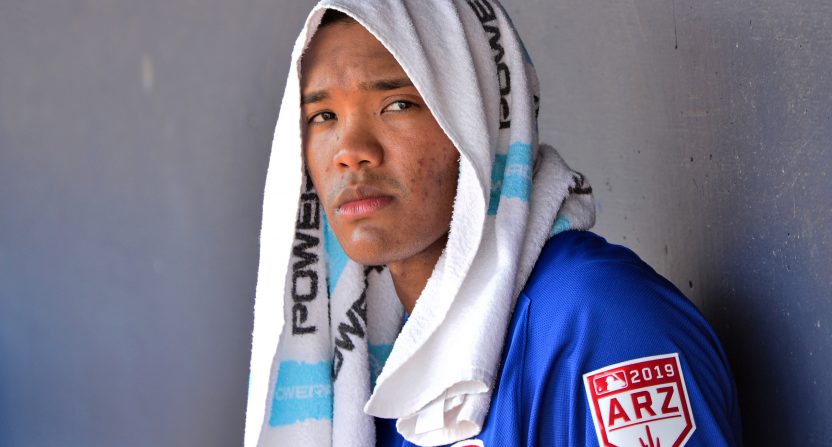 Chicago Cubs infielder Addison Russell was suspended last October under MLB’s domestic violence policy. Those 40 games are about to be up, and as the Cubs prepare to welcome Russell back (despite their infield already being full of players who haven’t been accused of domestic abuse), the team is reportedly concerned enough about the impending reaction that they’ve started threatening reporters and writers who might dare be critical of Russell.

That’s according to Sheryl Ring of Fangraphs, and backed up by Mike Gianella of Baseball Prospectus:

I spoke to one media member who told me they were privately instructed by the Cubs to lay off Russell and threatened with reprisal if they didn't.

I heard the same thing

This would sadly fit in well with the Cubs overall handling of Russell, going back to last year when the allegations were originally made. Manager Joe Maddon turned in a press conference performance dripping with contempt for the victim, while admitting he hadn’t bothered to read the very detailed, very credible letter written by Russell’s ex-wife, Melissa Reidy. That led to a rebuke from Theo Epstein, who then elected not to extend Maddon’s contract beyond the 2019 season. (Obviously it’s impossible to know how big of a role that moment played in Epstein’s calculus, and indeed the on-field regressions and mistakes were likely a much bigger part of the equation. Still, it’s definitely a part of the overall narrative.)

Russell, meanwhile, gave his own perfunctory press conference this spring, a widely panned mix of prepared answers. Now, though, Russell is with the AAA Iowa Cubs, and looks likely to be called up to the big league roster at some point in the near future. That’s apparently the event the Cubs are preparing for, including reportedly taking the extra step of privately threatening writers likely to not provide favorable coverage.

And favorable coverage hasn’t been hard to find! Just this week, USA Today’s Bob Nightengale wrote what amounted to a puff piece on Russell, framing it as a comeback narrative:

Addison Russell, the old man on the diamond, walks off the field, plops into a golf cart, wipes the perspiration off his forehead and smiles weakly.

Russell’s teammates with the Chicago Cubs left town a month ago. So did nearly all of the fans, except for two sitting in the bleachers over the weekend. Otherwise Russell is surrounded by a bunch of kids wearing Cubs’ uniforms, playing in the Arizona Rookie League, most of whom have yet to put a razor to their face.

“This brings you back to your roots, and reminds you why you played this game in the first place. It’s also the reminder that this is not where I’m supposed
to be at in my life.’’

This is definitely something that needed to be written!

“I feel like overcoming this challenge has made me much more self-aware,’’ Russell says. “It has taught me to slow things down, reflect, and be a better person. It’s given me a lot of insight on what kind of person I am, and what my goals are moving forward. I can sit back and play baseball, and still reflect and be thankful for the life I live.

“We live and we learn. We’re not going to do things right the first time every single time. I know I didn’t. But the big thing is keep pushing things forward and keep that positive energy going.’’

So we know that the Cubs are okay with that kind of piece, as evidenced by its existence. The timing isn’t a coincidence, either; it’s pretty clearly designed to be the opening volley of a PR campaign pushing the “changed man” narrative. That part isn’t really in doubt. But what about the other end of that spectrum, where they’re alleged to be strong-arming writers into positive coverage?

There’s really no way to prove it, obviously. Ring and Gianella wouldn’t be putting stuff out there they hadn’t heard. That doesn’t mean what they heard was true, of course, but we can’t really know either way, at this point. A few Cubs beat reporters and media members were pretty quick to dismiss the possibility:

I said as far as I know. The 5 traveling guys haven't been told that. Something that sensitive should be reported out more. For example,Bob is sitting next to me. Cubs didnt even know abut it. IMO, 100 percent completely false without having talked to every Chicago media member.

If the Cubs tried to exert that kind of pressure on us, I promise you that story would get written and featured prominently. This story was horribly reported.

I ripped him (Russell) many times since this all started. I have never heard one thing about anything I said. Never.

So, that’s that, right? Well, not necessarily. First of all, there’s this:

Second, there’s the fact that just because it’s not widespread doesn’t mean it hasn’t happened a few times, possibly to outlets or writers who don’t normally cover the Cubs but might be very interested in covering the story of a team welcoming an abuser back to the roster.

Hypothetically, the Cubs might feel more comfortable leaning on outlets that aren’t ESPN (or NBC Sports Chicago, or the Sun-Times), because the damage would be easier to control if the story got out they were doing so. If you need evidence of that, just look at those tweets! The local media dismissing the claim out of hand even though they can’t possibly know it to be false is a perfect example of the sort of safety net that could allow for a team to get away with quashing something like this.

That doesn’t mean it’s true, either! We can’t know. But it’s an interesting claim, and it’s worth monitoring the coverage of Russell’s return to see just how critical anyone with access is going forward.

Update: According to The Athletic’s Sahadev Sharma, Cubs president of baseball operations Theo Epstein said on Tuesday night that “the threat of reprisal to a media member about any topic, but especially one of this nature, is not acceptable.”

Epstein added that it would be a “fireable offense to try to threaten a media member because of unfavorable coverage.”

Theo talked a lot about baseball issues wrt to keeping Russell at AAA and said it was a baseball decision. But added that “there are other issues involved,” then had this this to say regarding claim Cubs had threatened reprisal to media who covered Russell negatively: pic.twitter.com/zKDWCwTyAI