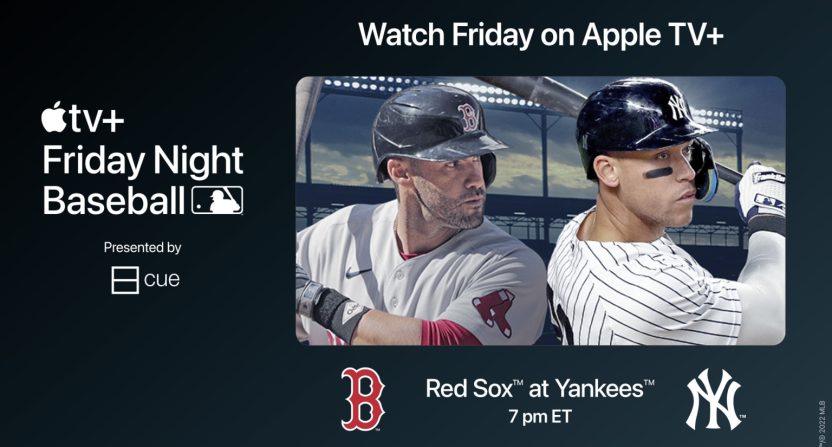 We’re not really sure how to say this, so we’re just going to say it.

If you would like to watch Friday evening’s game between the New York Yankees and Boston Red Sox because you’d love the chance to see Aaron Judge potentially hit his 61st home run of the season, you can do so on Apple TV+…for free.

Sure, it sounds way more complicated than that. You’ve heard a lot about streaming services and how they cost money. And that’s true. Not unlike paying for cable or satellite, paying a streaming service gives you access to many of the things they offer. That’s how capitalism works.

BUT…sometimes they offer things for free, too. Maybe you still need to sign up or give them an email, as you do with Apple TV.  But, and we cannot stress this enough, you don’t have to give them money to watch Friday’s Yankees-Red Sox game. That’s because, again, it is free.

Baseball fans: “I wish MLB would expand the game to younger people and embrace technology in an inexpensive way.”

Baseball fans: “WHY ARE YOU DOING THIS?!? I HATE MLB!”

Unlike if the game was on the YES Network, which is a pay-television regional sports network that either comes with your cable package or satellite package or virtual MVPD package. Either way, you are paying for it. It’s true! And when you go out to a bar to watch the Yankees on YES, the bar is paying for it. That’s also true!

Here’s the cool thing, though. Your local bar can sign up for Apple TV too, if they haven’t already, and show tonight’s Yankees-Red Sox game too. For free! Because it’s free!

We understand that it’s all very confusing. There’s been a lot of drama surrounding whether or not enough MLB fans and, more importantly, Yankees fans will have access to the game. Weirdly, there isn’t this kind of drama when the game is on ESPN or Fox. But, again, Apple TV’s broadcast is essentially a free stream available on your TV, phone, or app. Which is, technically, more available than an RSN that isn’t available over the top.

Would it be nice for YES Network’s Michael Kay to be on the call in case Judge hits a historic home run? Sure? Maybe? If that’s your thing. But it’s not like this will be the only time this issue comes up. And the history of baseball is paved with historic moments that were called by someone other than the hometown play-by-play guy. Joe Buck can attest to that.

Are you worried that your grandparents won’t be able to figure out how to find and sign up for Apple TV? Fair enough. The modern world of streaming services can be daunting even for the tech-savvy. Of course, it’s not like it was a breeze for your grandparents to figure out how to find the game on Dish or DirecTV or even their 800-channel cable package either. Let’s not pretend every game-viewing option before Friday was grandparent-proof. Hell, those of us old enough to remember can tell you how hard it was to explain DVD players to our grandparents, let alone cable systems.

ESPN, MLBN, nor anyone else, will have live-look-ins of Aaron Judge's at-bats for tonight's game on Apple TV+, as of now.

In all seriousness, the fact that New York Attorney General Letitia James (who has waaaay more important things to focus on) has gotten involved in this, and has done so to claim Apple is somehow depriving “New Yorkers [who] paid their cable bills” of the chance to see this game, is bonkers.

Millions of New Yorkers paid their cable bills expecting to see live sports programming. Denying them the chance to watch Aaron Judge step up to the plate to make history tonight is wrong and unfair.

I'm calling on @MLB and @Apple to open up tonight's game to the @YESNetwork.

And lest you think we’re the dumb ones, let us point out how many other people are aware of all this.

While I want the game to be on traditional TV (and with the YES team calling the game), Apple TV+ isn't putting the game behind a paywall so this has nothing to do with cable bills.

Apple hasn't charged for its baseball streams all season. https://t.co/efcWptb6JH

The game is available… for free? https://t.co/mJ63NtMcRZ

Statement says you have to pay an extra fee tonight, but you do not. pic.twitter.com/IZc1jNFiVp

Would it make everyone’s life easier if the game were on YES Network as well? Probably. But Apple paid a crapton of money for the chance to attract MLB viewers to its platform, and there’s no fairness clause in that contract (we assume) that says they have to let other networks in on their games if that makes life easier.

The situation might not be ideal, but when has watching sports in America ever felt ideal? Putting so many college sporting events on ESPN+ sucks, but we got used to it (because we didn’t have a choice). Putting NCAA Tournament games on TruTV sounded insane, but we got used to it. Putting pro and college sports on streaming services got confusing, but we figured it out. We complained about Thursday Night Football going to Amazon Prime and, guess what, we all watched.

Look, we’re not saying it’s fair, or right, or what it’s supposed to look like. We’re just telling you that tonight’s Yankees-Red Sox game is free to watch if you want to. And if you end up saying you couldn’t figure out how to download Apple TV or you couldn’t figure out how to pay for it or something like that, that’s just you being purposefully dumb for the sake of it.

In the immortal words of the Wicked Witch of the East, Bro guy…

And if you have no idea what that is, you might need help signing up for Apple TV tonight after all.