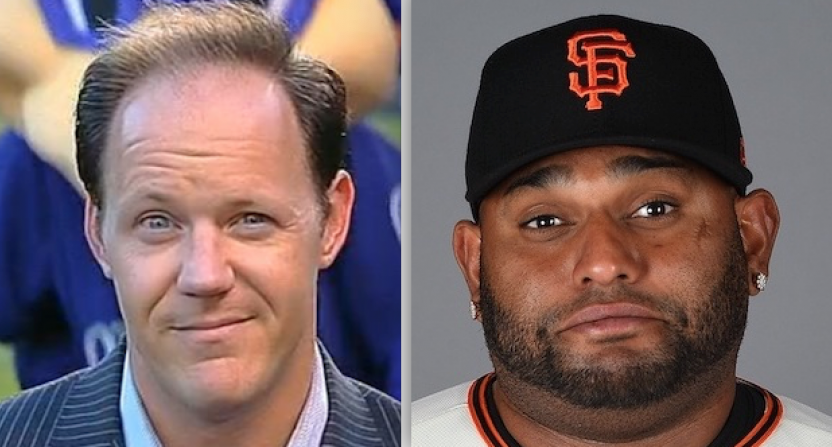 During the holiday weekend, MLB players reported to their home ballparks for “Summer Camp” to prepare for a shortened 2020 baseball season. Most of the news focused on players testing positive for COVID-19 or considering whether to opt out of the season for health concerns.

But as workouts began, another question for reporters to pursue was whether or not players had stayed in shape during MLB’s three-month shutdown. With team complexes and public gyms closed, players without their own facilities had to take initiative to stay in shape on their own, maybe with the help of fellow athletes organizing workouts.

For players such as Pablo Sandoval, showing up to training camp in good shape for the baseball season has often been a question. The 12-year veteran has struggled with his weight throughout his MLB career, thus making his physical condition a story before each season. Would the “Kung Fu Panda” be slimmed down or did he have work to do during preseason training?

The Athletic’s Andrew Baggarly appeared to answer that question definitively in the negative when he tweeted a photo of Sandoval carrying considerable padding around his midsection. The Giants’ reserve third baseman apparently did not spend his quarantine getting into the best shape of his life.

Pablo Sandoval is taking grounders at third base. His throws appear to have good carry. pic.twitter.com/Lrk5ltofyl

As you might expect, plenty of fans and some media had unflattering things to say about Sandoval’s condition. (I joined in too, and I’m overweight.)

Perhaps the camera angle was unflattering (Baggarly admitted taking the photo with his iPhone through binoculars). Maybe Sandoval could’ve worn a looser-fitting t-shirt. But the photo also made it clear that Sandoval reported to Summer Camp overweight, thus making his condition a story yet again.

The next day, Baggarly said he regretted tweeting the photo, expressing at the mean-spirited fat-shaming of most responses.

After viewing the reaction to the photo of Pablo Sandoval that I shared yesterday, I'd like to express a few things. Start with this: denigrating or dehumanizing anyone for their weight or appearance is totally unacceptable. (thread)

Yet Baggarly had to know that would be the response, right?  No, maybe he didn’t expect the sheer amount of outright insults, but many fans have often objected to any athlete getting paid millions of dollars who doesn’t show the commitment of performing to the best of his ability. (Sandoval was set to make $2 million this season, now reduced to approximately $740,000 in prorated salary.)

Sandoval’s job is to be ready to play baseball and judging from that photo, he’s not where he needs to be. And it’s Baggarly’s job to report that.

So why attach the photo? Because I'm one of, like, a dozen media members who get to watch these workouts, and it's my job to report on how the players are looking. Rather than comment on Sandoval's condition, I attached the photo so readers could decide for themselves.

Sure, Sandoval has shown that he can play well carrying more weight than most other players. (For what it’s worth, he had a good 2019 season, batting .268 with an .820 OPS, 14 home runs, 23 doubles, and 41 RBI in 296 plate appearances.) But being out of shape raises doubt and creates an easy narrative if he doesn’t perform.

Of course, there’s a difference between pointing out that a player is overweight and outright insulting his appearance, which is why Baggarly voiced his objections. (At the time, I thought his remark about Sandoval’s throws having good carry was sarcastic, but Baggarly reminded readers that the third baseman is recovering Tommy John surgery on his right elbow.)

Mostly, I'm disgusted by the ugliness and fat shaming from the "media entities" that co-opted the tweet into mean-spirited content for clicks. I'd encourage those folks to do some soul searching and personal growth. And until that happens, stop calling themselves journalists.

Baggarly was also offended by outlets and Twitter accounts that consider themselves “media” making derisive remarks about Sandoval, rather than reporting that he didn’t appear in proper shape to play baseball. Drawing a line between his reporting and lobbing insults has a slight whiff of mainstream media denigrating bloggers in the 2000s.

But what’s become clear in this age of “fake news” detractors is that many don’t distinguish between established, trusted media sources and clickbait outlets that have no interest or obligation in reporting facts. It’s understandable that Baggarly would want some distance between his work and the majority of what collected on social media and blogs after the Sandoval photo was posted.

However, it also seems a bit naive for anyone to think that wouldn’t happen when online discourse has been as ugly as it’s ever been. As so many of us like to say these days, read the room. That Sandoval photo was bound to get a nasty response.