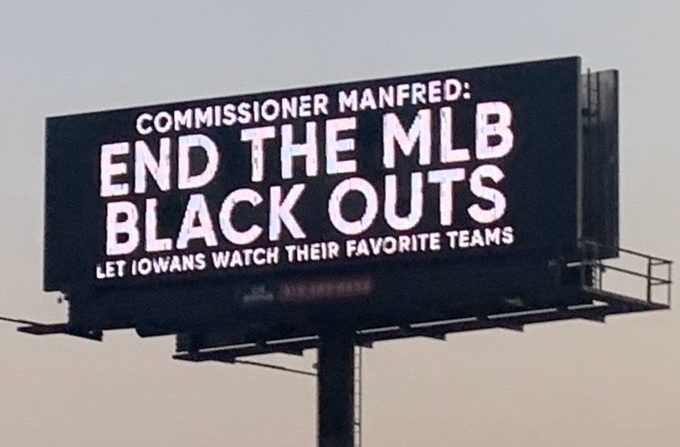 On Thursday, MLB will present the inaugural Field of Dreams game in Dubuque, Iowa, featuring the New York Yankees and Chicago White Sox. The somewhat gimmicky game will air nationally on Fox, and there will undoubtedly be more attention thrust upon the matchup than most Thursday night games in August.

Heading into the game, an MLB fan in Iowa is attempting to draw attention to blackouts of locally broadcast games, purchasing a billboard asking MLB Commissioner Rob Manfred to “end the MLB black outs.”

I’m here in Dubuque, Iowa this week and Iowans have a clear message they want Commissioner Rob Manfred and MLB to see/hear. They want to “End The MLB Black Outs.” This changing billboard can be seen off of Dodge Street (Highway 20) by the Inn Plaza. pic.twitter.com/ueKCIfnKh4

Iowa is a notoriously shitty area to be a baseball fan, with six teams (Cubs, White Sox, Twins, Brewers, Cardinals, Royals) blacked out on MLB.tv. Even if you’re not a fan of one of those six teams, fans can lose at least 18 games featuring their favorite team, due to the involvement of those teams in question.

However, as I feel like we’ve discussed here multiple times, this is far from an MLB-only problem. NBA and NHL fans in Iowa are blacked out of three teams each, and there aren’t more because there’s only one Chicago team in each of those leagues, Kansas City doesn’t have either an NBA or NHL team, and St. Louis doesn’t have an NBA team. The only “weird” MLB blackout in Iowa that doesn’t apply to the other leagues is Milwaukee, since the Bucks aren’t blacked out in Iowa (the Pacers, playing in a market without an MLB team, are blacked out). Iowa fans are blacked out of the Chicago and Minnesota teams in all three leagues.

So yeah, blackouts aren’t ideal, but they’re not just an MLB problem that Rob Manfred can fix with a snap of his fingers. Sinclair, who own the RSNs broadcasting five of the six blacked out MLB teams and are the dominant RSN owner in the country, should be pressured more, as should Comcast (owners of NBC Sports and its RSNs). Local blackouts won’t be ended by leagues, they’ll be ended by the network owners and operators when they stop relying so much on cable subscriptions for revenue.

If the larger argument here is to remove all geoblocking from streaming services like MLB.tv and NBA League Pass, there will undoubtedly be pushback from the RSNs and even satellite, cable, and streaming companies who want to keep this gravy train going – and get their cut when the model inevitably ends up pivoting.