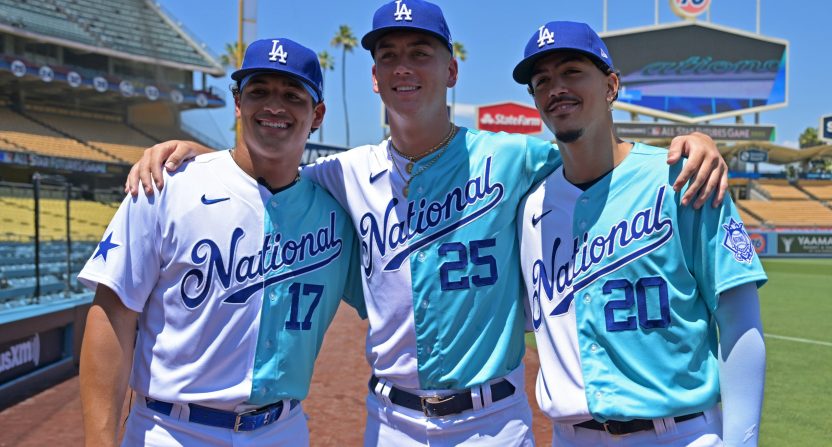 Baseball’s future was on display Saturday afternoon at Dodgers Stadium, but the literal Major League Baseball franchise that plays there couldn’t even watch the game from an MLB clubhouse.

The All-Star Futures Game is a yearly showcase that’s part of MLB’s All-Star Weekend, featuring the game’s brightest Minor League talents. It gives fans a chance to see baseball’s stars of tomorrow who they’ll hopefully get to root for in the big show one day.

Metaphorically, it is a quintessential way to “grow the game,” a comment refrain we hear from those who want to see younger generations embrace baseball. And the fact that the Los Angeles Dodgers couldn’t even watch the game from their own clubhouse in the stadium metaphorically represents what critics have been saying for years about Rob Manfred’s regime’s inability to do so.

The All-Star Futures Game was traditionally broadcast live on MLB Network on Saturday night. However, the exclusive rights to live coverage were part of the package that MLB gave to streaming service Peacock. And specifically, in order to watch the game live, you had to have signed up for Peacock Premium.

As the game was being played, the Dodgers were taking on the Los Angeles Angels in Anaheim. According to manager Dave Roberts, the team wasn’t able to see what was going on back in their own stadium because no one added the Peacock app to the clubhouse Roku (or whatever they use). And so, they were literally unable to watch the Futures Game happening in their own stadium.

“In the clubhouse, we don’t have Peacock.”

The meteoric rise of subscription-based streaming services and their entry into exclusive sports programming is leading to some very disappointing situations for viewers at home, let alone the people who literally work for Major League Baseball. And obviously, it’s not like the Dodgers or Angels couldn’t shell out the $4.99/month for Peacock (insert joke about both franchises’ spending habits here), but the fact that they didn’t even feel the need to sign up for a streaming service that has an MLB package speaks to just how thin these pies are being sliced.

Technically, the Dodgers and everyone else will be able to watch a replay of the game, a 6-4 American League victory, on MLB Network at 9 a.m. ET on Sunday. But that’s not really the point. It might sound like a small sacrifice as part of a larger media deal but it’s representative of the way that “growing the game” truly becomes moot when a streaming service is willing to throw millions of dollars at you. And plenty of people in the MLB world saw it that way on social media.

Hilarious indictment of both Peacock and the MLB. *This* is what’s keeping Notre Dame from the Big Ten? ? https://t.co/pgabJOUmQE

A doubleheader with Little League extras both times, plus the Futures Game hidden on Peacock. Another hell of a day for this sport.