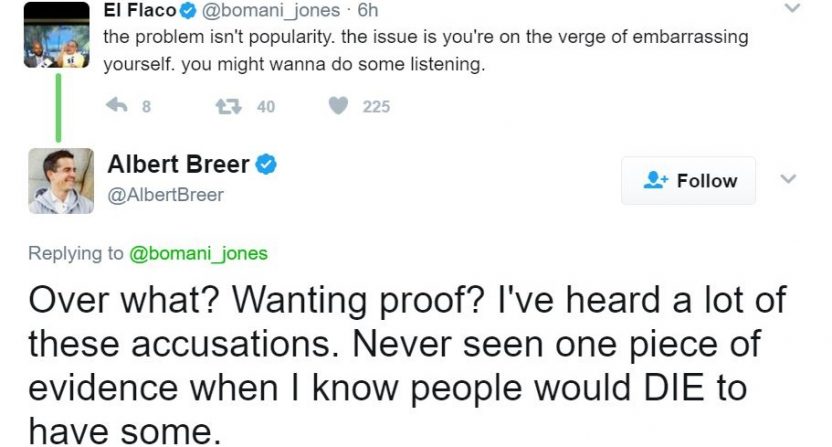 Albert Breer is a senior reporter for MMQB, an analyst for CSN New England, and has long been part of the Boston sports media scene. He’s in the news today for the same reasons Boston is in the news today: an ongoing debate about the level of racism found in Boston fans.

That debate is making the rounds today in the wake of the racial abuse Adam Jones endured last night at Fenway. A recap:

Baltimore Orioles All-Star center fielder Adam Jones was berated by racist taunts at Fenway Park while a bag of peanuts was thrown at him Monday night, calling it one of the worst cases of fan abuse he has heard in his career.

“A disrespectful fan threw a bag of peanuts at me,’’ Jones said, “I was called the N-word a handful of times tonight. Thanks. Pretty awesome.’’

Deadspin unearthed video of the fan purportedly being escorted out:

The fan who took that video told Deadspin the guy hit Jones in the shoulder or face with a bag of peanuts. This is in addition to the various slurs thrown Jones’s way. In the wake of those incidents, the Red Sox acknowledged and apologized for the behavior. Even Boston’s mayor weighed in with an apology.

And yet, despite all of that, Albert Breer suspected that Adam Jones was apparently making this up. Because in his beloved Boston, no one would dare act like this. Breer’s Twitter was a timeline of condescension and what seemed to be delusion. A few choice moments:

Is it horrible to want some proof? I dunno. I've probably been to 200 games at Fenway in my life. Never heard a slur yelled at a player. https://t.co/Nq29ijPrzy

@bomani_jones Not what I'm saying. It's just frustrating when there is no physical evidence of something that is supposedly a rampant problem. That's all.

Yes, where’s the proof? Sure, the team said it happened, other players chimed in to note that this kind of thing happens in Fenway:

Sabathia said it's talked about among black major leaguers: "we know. There's 62 of us. We all know. When you go to Boston, expect it."

As a player, I was only warned about two stadiums where racially motivated comments could occur..Fenway was one…#TruthSucksSometimes

Even current Red Sox players said they heard what was happening, according to team president Sam Kennedy:

And yet, still, Albert Breer refused it happened. Could anything change his mind? Well, yes, as it turned out:

h/t to @MikeLupica for doing actual reporting on this. Here's hoping they make the bleacher idiot's name public. https://t.co/vp79RSgdsD

It shouldn’t be all that surprising based on today that Albert Breer would prefer to wait for an old-school white reporter to chime in rather than believing Adam Jones, a black baseball player who was literally hit with a bag of peanuts. Some people might view that as a sign that, hey, it might be time to reevaluate your own principles.

Albert Breer views it as totally normal, and anyone who dares point out the inherent ridiculousness should have been spending their time finding evidence to convince him earlier in the process:

@StaceGots It looks like you're a reporter. Would your time have been better spent finding out what actually happened than finger-wagging on Twitter?

The great irony, of course, is that Breer could not be doing any more to reinforce the stereotype he’s so desperately trying to refute.

Of course not everyone in Boston is a racist. That should go without saying; the only people who feel the need to point that out are people like Breer, whenever someone from Boston does something indisputably racist. Which is why it comes up in the first place. He’s so far lost that he doesn’t see the inherent problem with not believing a black athlete’s report on its own merits, just because he doesn’t think he’s seen anything racist at Fenway in over 200 games.

Perhaps, and this is just a guess, Albert Breer might not be fully aware of racism going on around him at any given point?

Kudos to the Red Sox for their strong condemnation, at least. Hopefully things start trending in the right direction, so that the Fenway Park experience can more properly line up with Albert Breer’s version.