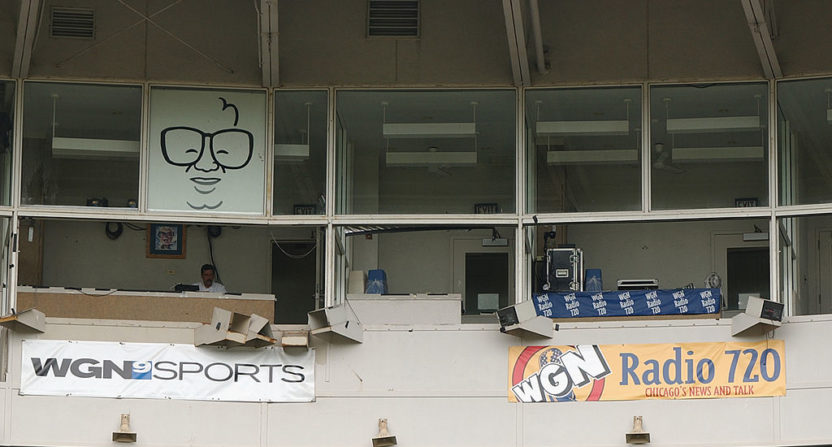 Last week, the Houston Chronicle published an article that could never have existed a decade ago. The piece explains how the Astros’ broadcast booth is working advanced stats into its telecasts, with quotes from first-year play-by-play man Todd Kalas and color commentator Geoff Blum about the value of new-age stats.

“We’re not trying to reinvent the wheel,” Kalas said. “The advanced analytics are more of an appetizer. The main course is still the stats you know. We’re not going to replace ERA with FIP or batting average with WRC+. We’re just offering a different way to look at things.”

Blum, a former player, is quoted endorsing advanced stats like OPS and FIP.

“When I realized I might have a career (on TV), I started paying more attention to the numbers,” Blum said. “I like OPS because it gives more weight to a home run than a base hit. Batting average is overrated.

“I like FIP because of all the shifts that teams use. You’ll see a base hit against a shift that would otherwise be a routine ground ball. Swings and misses get FIP numbers up, and it’s good when you have guys who can strike people out.”

For any baseball fan who is conversant in advanced stats, those quotes read like poetry. For years, many of us have seen sabermetrics on Twitter, on blogs, on mainstream media outlets and even in newspapers. We’ve referred to them in day-to-day conversation and used them to field our fantasy teams… but almost never heard them on television, aside from a stray mention on a studio show. Since the days of Bill James, the broadcast booth has been an impenetrable bastion of old-school wisdom.

That’s now starting to change, not only in particularly progressive booths like Houston’s but also across baseball. It’s tough to watch a game without hearing, at the very least, some data on launch angle or exit velocity. If you’re lucky, a producer might pull up a graphic of the league leaders in FIP, or someone might pass the play-by-play guy a note with a stat about OPS+.

The boom in advanced stat usage on local broadcasters likely owes in large part to Statcast, the MLB-administered technology that tracks the movement of players and the ball. Statcast spits out digestible numbers like exit velocity and home-run distance, and the folks behind the scenes at MLB Advanced Media translate defensive data into simple metrics like “catch probability.” The intuitiveness of these figures helps broadcasters understand them and convey them to audiences. It’s difficult to explain to a casual viewer what wRC+ is, but “catch probability” and “exit velocity” are pretty self-explanatory.

But although we’ve come along way in recent years, we’re pretty clearly in an awkward stage of the advanced-stats-on-television revolution. While the Cubs, Rays and Astros booths use advanced stats in nuanced conversation, most broadcasts feature some version of this exchange:

Announcer A: Well partner, if you believe in the new fancy stats, he’s the third best defensive second baseman in the American League, based on something called “ultimate zone rating.”

Announcer B: They’ve got a stat for everything these days.

Announcer A: Sometimes it feels like too much information.

Announcer B: The problem with these new stats is, they don’t take into account…

And on and on. So often, it feels as if broadcasters feel obligated to mention advanced stats but then similarly obligated to denounce them. They bring up sabermetrics… and then quickly shoot them down.

But hey, that’s progress. Announcers have gone from ignoring advanced stats to acknowledging them. Maybe next they’ll accept and then embrace them. Before long, it seems safe to bet, the booths that celebrate wins and RBIs will be the outliers—not the ones that celebrate FIP and OPS+.