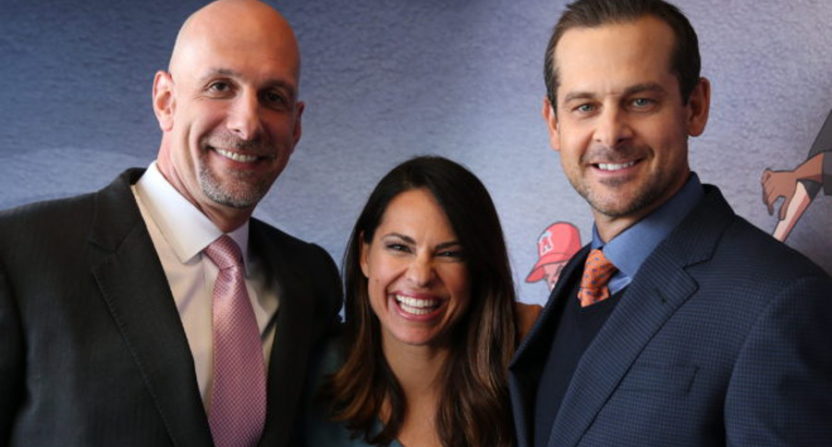 The New York Yankees appear to have settled on ESPN MLB analyst Aaron Boone as their next manager. Friday saw multiple reports, including from Bill Madden of The New York Daily News and from Andrew Marchand of ESPN, that the search was down to Boone (seen at right above with Sunday Night Baseball colleagues Dan Shulman and Jessica Mendoza) and San Francisco Giants’ bench coach Hensley Meulens.

The Athletic’s Ken Rosenthal then reported that the Yankees had made their decision, and Henry Schulman of The San Francisco Chronicle reported that Meulens wasn’t leaving for the Yankees’ job:

I'm hearing Hensley Meulens is NOT leaving #sfgiants to be #yankees manager.

That would seem to mean it’s Boone, and that matches with what Joel Sherman of The New York Post tweeted:

A Meulens associate says he is no longer a candidate for #Yankees managing job. No confirmation yet, but it is looking more and more like Boone is the guy. But NOTHING confirmed on record or for background yet.

After that, Madden and ESPN’s Buster Olney both reported that it’s Boone. And in a bit of good prediction, Sherman also wrote earlier Friday that Boone seemed like the likely pick, in a piece titled “Many signs point to Aaron Boone becoming the Yankees’ manager“:

Brian Cashman was going to present his recommendation for next Yankees manager on Friday to Hal Steinbrenner, and the way the principal owner feels about his general manager these days — which is to say very positively — my suspicion is whoever is endorsed will be offered the job.

My gut says it will be Aaron Boone, based mainly on tidbits here and there and my history covering the team and that Boone has had key allies the whole time and, well, gut is all of those little strings that when tied together form a sense of what could occur.

…In my gut, I see Boone being able to convey lots of insights about many organizations as a plus in an interview. There always is a sense of wanting an opposite from what was just there when switching managers, and Boone’s comfort with the media contrasts sharply with Girardi.

Also, to be around Boone is to see an important Joe Torre trait: a comfort in his own skin.

His catalogue of strengths make me think he will be the guy — something in my gut triggered, when what I want is something in my ear from Steinbrenner or Cashman or a well-placed source confirming who it actually is.

So there still isn’t any official confirmation here, but all signs do seem to be pointing to Boone. And that will be interesting. As Sherman noted, Boone is the only one of the candidates who hasn’t been involved with a MLB team as a coach or manager. He’s been doing a lot of TV analysis, though, working as a MLB Network guest analyst for the 2009 playoffs before he even officially retired, then joining ESPN the following February.

Boone has certainly stayed connected to the game, and while his Yankees’ history as a player isn’t long (he was only on their roster from July 2003 through February 2004), it was highly significant, with him hitting a crucial home run in Game 7 of the 2003 ALCS (paving the way for the team’s World Series title) and then tearing his ACL playing pickup basketball, leading to the team going out and getting Alex Rodriguez.

If this move does pan out, we’ll see if Boone can be as important to the franchise as a manager, and we’ll also see who ESPN gets to replace him on Sunday Night Baseball.