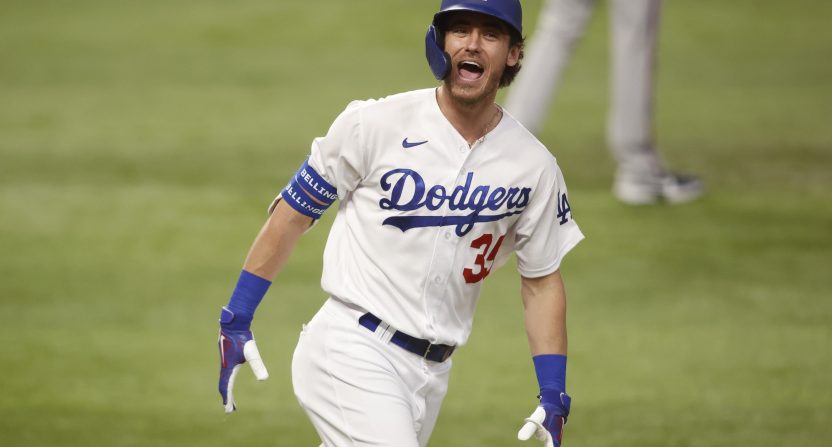 .The 2020 MLB League Championship Series round has been completed, and it’ll be a matchup between the Tampa Bay Rays and Los Angeles Dodgers in the World Series. A couple weeks ago, we ranked this matchup ninth of the 16 possible options heading into the Division Series, so things could have been far worse for MLB (like say….Rays vs Braves, which we ranked 11th).

But looking at the final viewership for both the ALCS and NLCS, the news is far murkier for MLB.

When we last checked in on Friday, following Game 5 of the ALCS and Game 4 of the NLCS, the ALCS was averaging an all-time low of 2.299 million viewers, and the NLCS was trending better at an average of 3.448 million viewers. Over the weekend, all five games between the two series topped those averages, with Sunday’s NLCS Game 7 between the Braves and Dodgers reaching an MLB season-high 9.662 million viewers.

Overall, the 14 games in the LCS round averaged 3.629 million viewers, down 26% from the 11 games last year (4.589 million viewers, notably with only one game on Fox as opposed to three this year, two of which were simulcast on Fox and FS1).

Where does that leave MLB heading into the World Series? Well, that’s somewhat tough to say. The series has no significant sports competition for Games 1 and 2, airing Tuesday and Wednesday, but will have to contend with the Friday night TV dead zone for Game 3, college football for Game 4 on Saturday (South Carolina-LSU on ESPN, Michigan-Minnesota on ABC), and Sunday Night Football during a potential Game 5 (Bucs-Raiders, which will probably suck away a chunk of both markets).

Last year’s World Series did not set a record-low for viewership (largely because it went to seven games), but four of the seven games in the series did hit record lows. The Rays played in the second least-watched World Series ever, their 2008 loss to the Phillies, which averaged 13.193 million viewers over five games. Game 3 of that series, delayed an hour and a half by rain and not starting until after 10 PM on the east coast, is the only World Series game to draw under 10 million viewers. All of the right elements are in place for this series to hit rock bottom for MLB, and if the headlines in a week or so don’t contain the phrase “record low,” baseball should be thrilled.