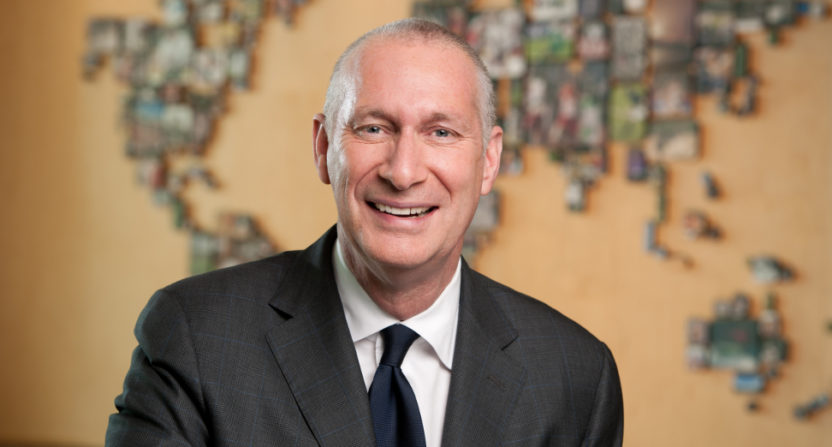 It’s been discussed for a while that Meadowlark Media (the John Skipper/Dan Le Batard-led enterprise, which has raised significant funding and brought in some big names) has ambitious plans in the works on documentaries and podcasts, beyond even what they’ve done so far. Last September, Skipper went as far as to say that there is “a void in world class non-event sports content” and “There is just not a lot of sports content in any genre on Netflix, Hulu, Paramount +, HBO Now or Discovery Plus.”

Clearly, Skipper (seen above during his time at ESPN) does not read this site and its coverage of the many, many non-event sports projects on those services (barring HBO Now, which did not exist even at that time; it was rolled into HBO Max following that service’s 2020 launch) and others. But it does make sense that Meadowlark is diving even more heavily into their own sports documentaries and podcasts.

There may not be a “void” in that kind of content, but there is a lot of appetite for it amongst the different streaming services. And Meadowlark has an impressive lineup of names that will help their projects get some attention. And they’ve now rolled out more details on one particular giant upcoming series, Sports Explains the World. They relayed those details to Alex Weprin of The Hollywood Reporter Tuesday:

The production company is launching its most ambitious content effort yet, a multi-platform series called Sports Explains the World.

“We are putting a stake in the ground that we are going to be a storytelling company,” Skipper tells The Hollywood Reporter. “When we launched the company, what we wanted to do overwhelmingly is to tell stories. Both in the number of podcasts we do and in our video. And one of the great ways to tell a story is to have an anthology series in which to put those.”

It is interesting to see a series of this scale (the plan so far is for 30 documentaries of 22-30 minutes each and 45 enterprise podcasts, with most of the podcasts being one-offs but a few having multiple episodes)  announced by one production company. There have been some multi-sport series from single production companies since ESPN launched 30 for 30, including Stardust Frames Productions (Untold), Red Bull Films (Dear Rider, Any One Of Us), and Box To Box Films (Drive To Survive, subsequent tennis and golf series), but nothing with this many planned episodes announced at once. Skipper gives Weprin another notable quote there to explain this approach, saying it will help them market interesting stories that might not stand out on their own:

“Individual stories that don’t feature a big name or a famous team or significant event can be hard to sell, that is a lesson we learned at 30 for 30,” Skipper says. “When you build the brand, then you can tell the story about a Colombian narco trafficking through the story of the Colombian National Team’s involvement in the 1994 World Cup, and what happened to Andres Escobar.”

It’s also notable to see that the documentary content here will be short half-hour or less episodes. There haven’t been a ton of those in the sports documentary space recently: 30 for 30 did 69 shorts from 2012-2019, but many of those were under 15 minutes. More recently, the sports documentary trend has been towards either hour-plus features or to multiple-episode series where each episode is an hour; short projects like Religion of Sports’ Apple TV+ series Greatness Code have been the exception rather than the rule. So it’s interesting that Meadowlark is doing something short projects.

There is no landing platform announced for these Sports Explains the World projects yet, and no debut date beyond “early 2023.” Skipper told Weprin they’re shopping them to streamers, and that most streamers “have audio partners, or audio divisions within their company, so they are equipped to monetize both of those genres.” So it sounds like the goal is to get all of this under one banner.

In 2021, it was reported that Meadowlark Media had signed a multi-year first-look deal with AppleTV+, so that could be a destination here, but we don’t know the specifics of that deal (and even at that time, it was noted that Meadowlark planned to work with multiple streamers, not just Apple). Another option could be Amazon, which feels like a fit for both video and audio content (and has former long-time ESPN executive Marie Donoghue there as vice president of global sports video). But there are maybe other possibilities as well.

It’s certainly bold to order this much content without a destination locked down. But Meadowlark does have enough big names attached that these projects will likely find a home. We’ll see just where that winds up being. And we’ll also see what topics they cover; Weprin notes that some of the projects in process cover Ukraine, Ethiopia, Kobe Bryant murals in Los Angeles, Wilt Chamberlain’s legacy, and Curt Schilling’s 38 Studios mess. So there’s certainly a wide swathe of subjects here. This will be worth keeping an eye on in the months ahead.