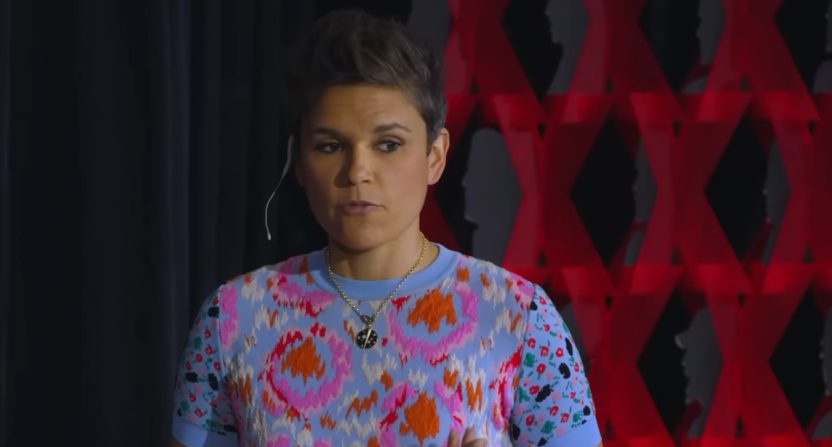 Kate Fagan brings a much-needed perspective on sports. The former ESPN columnist and commentator now works for Meadowlark Media, where she co-hosts the Off The Looking Glass podcast with Jessica Smetana. Fagan is also a New York Times bestselling author who will be releasing her third book, Hoop Muses: An Insider’s Guide to Pop Culture and the (Women’s) Game, in March.

Awful Announcing recently caught up with Fagan to speak with her on a variety of topics.

Has the Brittney Griner situation brought attention to the problems of WNBA players going overseas?

“There is a lot of rich discussion matter that has always existed. What has happened with Brittney has been the worst-case scenario that has been hinted at before. There have been players playing in Turkey when there has been a mass shooting event. There has been a constant discussion on how difficult it is to play overseas and how risky it can be on various levels. Brittney is now a universal example of all of that.”

What was your reaction to Griner’s former college coach Kim Mulkey not being more supportive of her?

“I was surprised. You think that no matter how deeply you hold a grudge there still should be certain circumstances that dissolve past differences. One of them you would think would be your former player who won you a national championship being illegally detained by a foreign state.”

It seems alarming that she failed to say the bare minimum, doesn’t it?

“When I read that, I was disgusted.”

What has improved the most in women’s sports over the past decade?

“More people understand the barriers in economics. And I’m not saying how much each franchise makes, but more so all of these hurdles that have been baked into the system that limit women’s sports in ways that are fixable. Like TV rights deals and marketing deals. I think more and more people are realizing that if you give women’s sports a chance to sell itself and see what the value is on the open market, there is a ton of room for growth and it’s been undervalued.”

What’s your new book about?

“It’s curated by Seimone Augustus and illustrated by Sophia Chang. It’s an illustrated history of women’s hoops and pop culture. So, it’s kind of like Shea Serrano’s Basketball (and Other Things), but for the women’s game. We go back to Naismith and then uncover all these stories of women who have played this game in every nook and cranny and every year since 1891 and many of them buried by history. Like the Native American teams of the 1900s, the Black barnstorming teams of the 1930s.”

How did the idea of your podcast come together?

“The north star as we developed it was trying to create a podcast that actually put joy and humor first. A lot of women’s sports podcasts are analyzing grievances or discussing the ways women are boxed out of women’s sports. We talk about those things but we try to flip them on their head and explain them through a sketch commercial or a fake ad for a show. Throughout the years we have used all kinds of different angles to try and get people to understand women’s sports but we’ve never really tried humor and joy.”

Any funny or memorable moments from being on television at ESPN?

“The story that haunts me is that I would always fill in for Bob Ley on Outside The Lines. We were doing a show, and the first segment was going to be on Caster Semenya and Olympics sex testing. I had written a detailed intro around a topic that you really don’t want to be extemporaneous about. About 90 seconds before the show went live, the prompter went out. It was a bit of a high-wire act because I’m not Bob Ley. It’s not like I have 30 years (of experience) to navigate dozens of these examples of technology failing. I remember wishing we had just done a LeBron segment.

“About 10, 20 seconds before me being on the air, they got the prompter back. Seeing that was one of the greatest reliefs ever.”

As a sneakerhead, if something terrible happened and you could only save one pair, which one would it be?

“It would be a pair of Clyde Frazier Pumas that my dad got me right before he was diagnosed with ALS. They are the most special pair of sneakers I own. They’re red, low tops. They’ve got the standard Puma emblem that comes along the side. They have the “Clyde” embossed in them in gold. I grew up a Knicks fan, so I think that’s why my dad got them for me. Walt Frazier was a huge part of my childhood.”

How did you get passionate about sneakers? Was it from playing basketball?

“That was certainly the foundation. We were middle class growing up, and I could have one pair of basketball sneakers a year. This was the late 80s. I think the Jordan 4 was my first real basketball sneaker. I remember waking up in the middle of the night after I got them and looking at them gleaming in the moonlight. When I was 30, and lucky enough to be at ESPN, if I wanted to spend a few hundred dollars on sneakers, it wasn’t a once-a-year thing. I saw a re-release of that exact pair that my mom and dad bought me as a kid. I was like ‘Oh my gosh, I could have those sneakers again.’ That was the very first pair that I bought.”

You live in Charleston, S.C., which is a great food city. If someone’s coming in from out of town, where are you taking them?

“I take them to a little coffee shop called Sightsee because they have this special roast. It’s in a cool part of Charleston that’s away from the tourist area. Then we usually go to dinner at Renzo. They do great pizza, and they have one of the best cocktail programs that we’ve ever come across.”

More on Fagan can be found on her website.