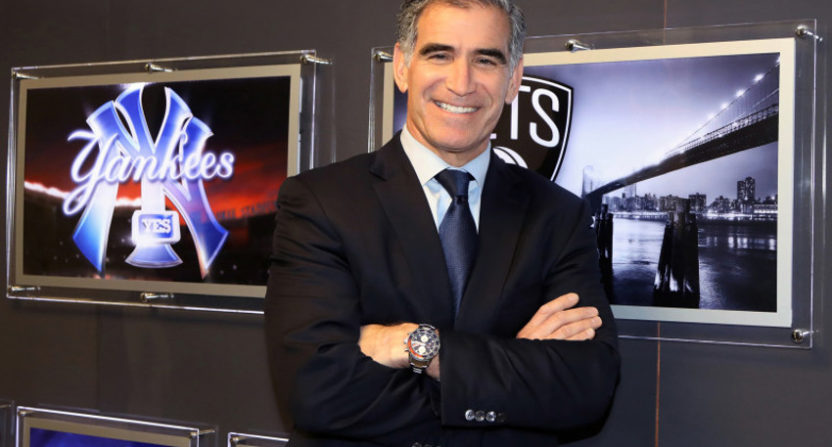 We’ve seen plenty of sports network carriage disputes over the years, but the YES-Comcast one was perhaps particularly interesting. Their deal expired during the Yankees’ 2015 season and the two sides struck temporary deals to keep it going for a while, but the talks eventually ran out in November 2015 and a deal wasn’t reached until January 2017, which played a role in some notable ratings effects (such as competitor SNY’s Mets’ broadcasts outdrawing YES’ Yankees broadcasts for the first time ever during the 2016 season ). YES Network president Jon Litner joined the company in September 2016, in the middle of that fight, and he did so after coming over from Comcast (where he oversaw all of the Comcast/NBC RSNs from 2007-2015). Cablefax’s Alex Silverman posted an interview with Litner this week, and it has some significant comments on that dispute in particular and the leading role Fox (which bought 80 per cent of YES in 2014) played in those negotiations:

By the time you got here, the Comcast standoff was well under way. What was your role as the new network president given that Fox was handling negotiations?

[Fox Networks President of Distribution] Mike Biard and his team were terrific. They drove the negotiations. We were, in many respects, along for the ride because of other Fox programming entities—we had been out of contract with Comcast, they were at the tail end of their agreements with Comcast. What I wanted to do was make sure that once we were back on, and once we had reached the agreement with Comcast, which I was confident we were going to do, that immediately we could talk about building value together because I felt like sports can work really well if you can build the relationship with the folks at Comcast who are responsible for offering it to their customers in their regions. Because of my relationships at Comcast, having been at Comcast for so many years, I knew all those people, and I wanted to make sure we rebuilt those relationships, that we worked hard to make sure that we brought value to them and that we could support their efforts to market the product to their customers, and we talked a lot about that. [Biard] did all the heavy lifting, I was on the periphery in a supporting role.

It’s notable to hear the extent which Fox executives and other Fox properties were involved in that dispute; we discussed that a bit before in the general context of carriage disputes, but it’s interesting to hear it from the inside. That perhaps might be part of why this dispute ran so long; if Fox wanted to strike deals for their other entities as well, that brings in some complications. It also helped Comcast that the Yankees’ 84-78 season in 2016 wasn’t exactly must-see TV, even for many fans, and that the Nets went 21-61 that year; New York City FC was better, going 15-10-9 and making the conference semifinals, but the Yankees’ and Nets’ weakness made YES a bit less in demand.

Litner’s comments about working to try and rebuild relationships at Comcast are worth a look as well, as they show how networks’ roles aren’t necessarily over once a carriage deal is signed. Trying to support Comcast efforts to market YES Network is important, as that could both boost the network’s ratings and have subscribers care about keeping them if another carriage dispute pops up down the road. And that’s perhaps interesting in a larger sense; carriage disputes often get pretty nasty and lead to plenty of accusations on both sides, but the sides do need to work together again in some ways once a deal is signed. That can be awkward, but it certainly helps if you’re someone like Litner who’s worked for both companies involved.

There’s a lot of other interesting material in Silverman’s interview, including Litner talking about the overall RSN environment (he thinks there can be some challenges without a strong anchor team, but is confident the Yankees and the demand for their broadcasts will keep YES in solid shape; the ratings jumps this year certainly help there) and his discussion of digital MVPDs (multichannel video programming distributors; YES has deals with all of the major streaming options, including Sling, which is interesting as they don’t have a deal with Sling parent Dish thanks to Dish not being in their market). His discussion of the channel’s new initiatives to attract younger viewers is perhaps particularly interesting, though; that includes a yoga-themed ad showing the network’s plans to cover the team’s players as they grew, the “Homegrown: The Path to Pinstripes” show that focused on Yankee prospects (a big and different step, and one that got a boost thanks to the Yankees’ 20 per cent stake in the network, which encourages them to keep it growing), and perhaps most notably, their decision to live-stream production meetings on Facebook (which has attracted significant viewership). Here’s what Litner said about that:

It’s consistent with adapting to new habits of young consumers. We’ve always said, ‘Let’s figure out ways we can connect to our audience using Facebook or using Twitter or using YouTube or whatever the social platform is.’ So, we sat down and discussed different ways in which we could showcase our great content to an audience and give them access that they otherwise would never have.

We thought, ‘Let’s give that audience the ability to lean into and attend our production meting for every series and have, on Facebook Live, have them comment based on what they are hearing, so they get a sense of what the storylines are and give us some feedback, some of which we may actually use in our telecast.’ The content was so captivating, and we were seeing real numbers being generated for our audience, so we actually went to Papa John’s and said, ‘We’d like you to sponsor this,’ and they did so. That’s on top of a dozen sponsors of our streaming product on Fox Sports Go.

We’ve had a lot of success selling on these digital platforms because there’s a real audience for them. People are leaning into that product versus the traditional audience, which is a little bit more passive. We’re going to continue to make sure [linear TV viewers] get the best production around the country—we’re very proud of our production excellence and the way we cover our games—but we also want to feed this other, younger audience that is interested in having access and interested in learning about the ways in which we go about producing a game and what storylines we’re going to follow.

We’ll see where YES Network goes down the line, but they’re certainly in a better place now they have a Comcast deal again, and moves like streaming these production meetings seem to be paying off for them. Having enough numbers to get a sponsor is definitely a good sign, and this kind of coverage has a couple of benefits; in addition to the Facebook numbers alone, it also may help build awareness about upcoming games and encourage more people to tune into those TV broadcasts to see how those storylines play out. It’s also notable to hear Litner discuss that they’re focused on not just traditional TV viewers, but also finding ways to reach out to a younger audience that wants more than the standard broadcast. It will be interesting to see what else they come up with there.