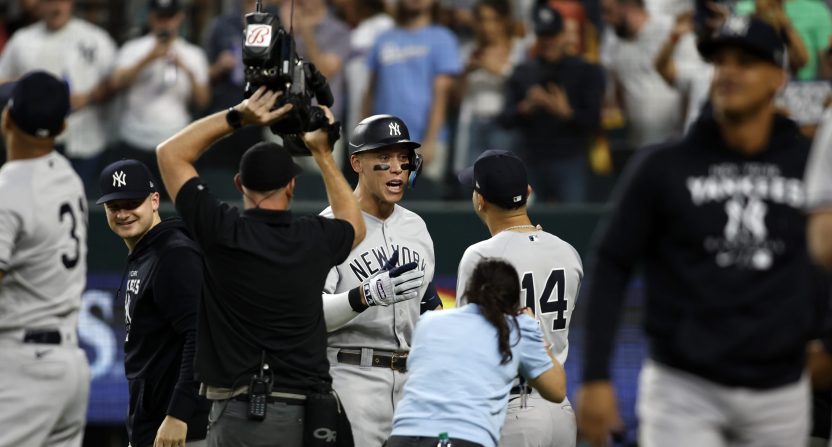 The media drama surrounding Aaron Judge’s home run chase culminated earlier this week when the New York Yankees slugger finally smacked No. 62, breaking the franchise and American League mark. Finally, the college football world and Michael Kay could both rest easy in the knowledge that it was finally over.

There was plenty of drama around the availability of Yankees games as Judge chased Roger Maris’s franchise single-season home run mark, with fans, media, and politicians attempting to influence the networks involved as well as the announcer calling it.

While YES Network had the broadcasting rights to most of the games during the chase, there were a few instances when Fox, MLB Network, ESPN, and Apple TV+ held the rights, making many a head explode at the chance that Kay might not be the voice to make the historic call. However, Judge’s mini-slump helped ensure that by the time he socked No. 62, it was on YES and Kay can finally get some sleep.

In spite of all the complaining, politicking, and attempted workarounds, it all worked out pretty well for YES.

Benjamin added that he saw a sense of “poetic justice” in the way things worked out.

“Nobody covers the Yankees like we do. It was definitely poetic justice,” Benjamin said. “We set up for this. We’ve had everything in place for the Judge moment. No one else could have captured it like we did.”

On one hand, he’s probably right. YES Network knows the ins and outs of broadcasting a Yankees game better than any network.

On the other hand, it’s the perfect capper on this hyped-up moment in which you have to wonder whether or not people would have cared (or been convinced to care) had Judge played for the Texas Rangers or Minnesota Twins. There have been plenty of memorable franchise moments captured by national broadcasters and rarely do people look back and worry too much about it. Seeing this as “justice,” as if YES Network had been wronged in some way, is so very Yankees.