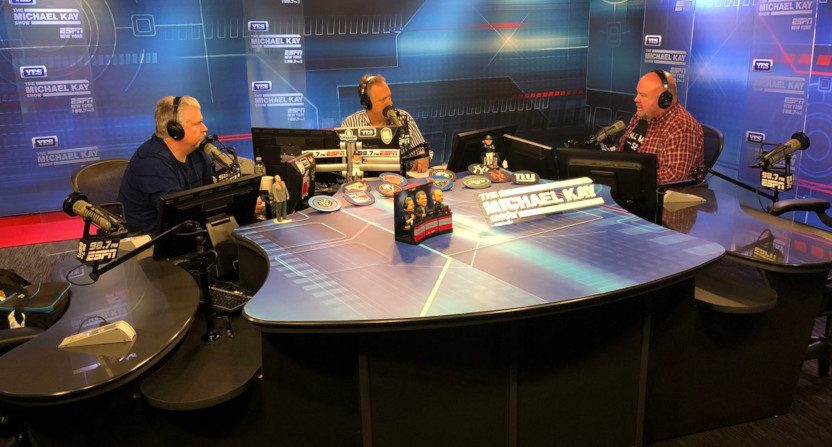 Last month, New York City radio station WFAN let afternoon host Chris Carlin go, changing that show from “CMB” (Carlin, Maggie [Gray] and Bart [Scott]) to “Maggie Gray and Bart Scott.” On Wednesday, Carlin got an opportunity on WFAN competitor ESPN New York, as he was supposed to fill in for The Michael Kay Show co-host Peter Rosenberg (off for Yom Kippur) for two hours of the four-hour show. However, Carlin (seen at right above with Kay at center and co-host Don La Greca at left) only wound up making a 30-minute appearance there, and Kay said on-air that was thanks to a threat from WFAN parent Entercom that Carlin’s contract (which runs through the end of the year) would be voided if he stayed longer. Here’s more on that, and on Kay’s reaction, from Neil Best of Newsday:

About 30 minutes later, he confirmed on air that shortly before the show, an Entercom executive contacted ESPN Radio to warn that Carlin would forfeit the last three months of his salary if he appeared for two hours.

Kay said it “befuddles” him that a company that fired someone would stand in his way. “Such petty, petty things,” he said. “They don’t matter to us at all. They’re fleas on our backside. But I can’t believe they would do that to somebody . . . They’re so mean-spirited and petty, to stop a guy from going on the air. If he’s that bad that you fired him, what do you care if he’s on the air for two hours with us?”

On one hand, Kay has a point; it does seem sort of silly for WFAN to say that they don’t want Carlin, but that he can’t appear anywhere else. But on the other hand, non-compete clauses are relatively common in the sports media world, which leads to things like Brett McMurphy breaking news on Facebook post-ESPN layoff (and pre-Stadium hiring); Facebook was outside of his non-compete agreement, while other media outlets weren’t. That doesn’t mean those clauses are justified (and exit deals that avoid or reduce them are often worked out), and trying to enforce one in this particular case seems sillier than it might in some other cases (this was a two-hour fill-in spot, not a permanent job or even a week-long job), but it is also perhaps relevant that this is an appearance with a direct competitor to WFAN rather than one just somewhere else in media.

This is also notable in the larger sagas of WFAN and ESPN New York. The changes to CMB seemingly have a fair bit to do with Mike Francesa’s surprising return from retirement in April 2018 (after just four months away). CMB was initially WFAN’s replacement for Francesa’s drive-time show, but was shortened and bumped earlier after Francesa came back. And WFAN may have had some qualms about paying three significant salaries for a shorter afternoon show over the long run. Meanwhile, Francesa’s show hasn’t performed as well since his return as it did before he left, and it’s gotten to the point where ESPN PR’s even making claims of Kay beating him. (Those claims are generally wrong, as they don’t include WFAN’s streaming and do include ESPN New York’s streaming, but the battle has gotten closer since Francesa’s return, and Kay did legitimately win December and January ratings  even with streaming factored in.)

So that rivalry’s closer than it was for much of Francesa’s original run. And that may be part of why WFAN is clamping down here. However, it’s sort of a lose-lose situation for them however they respond. They managed to keep Carlin from a longer stint on ESPN New York, but they wound up getting called “mean-spirited and petty” on the air as a result. (For the record, Carlin himself took the high road towards his former place of employment, and said lots of good things about his former co-hosts.) And it’s not a great PR look for them to be so worried about keeping Carlin from a long on-air stint with a competitor, and they’ve taken backlash online and in print as a result. Whether that’s worth it just to keep Carlin off the air for 90 minutes is certainly debatable.