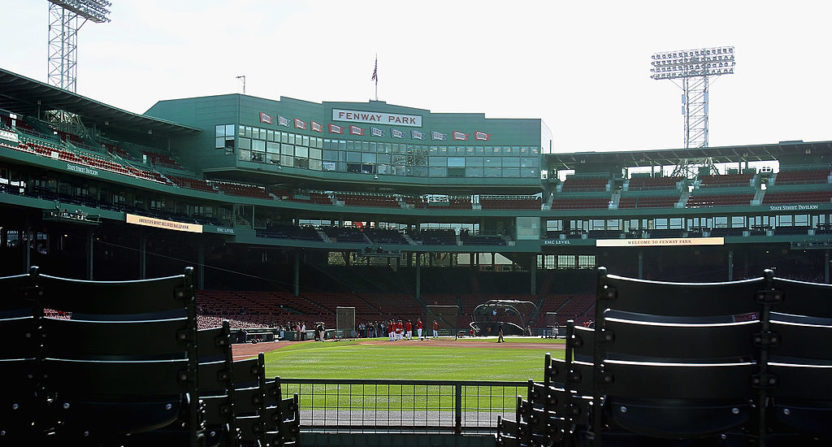 The relationship between the Boston Red Sox and their radio partner WEEI seems to be getting awfully contentious awfully quickly.

Days after a Red Sox spokesperson alluded to “offensive and out of line” opinions on WEEI in article about racism in Boston, Kirk & Callahan host Kirk Minihane lashed back Monday, repeatedly calling members of the Red Sox organization, including ownership, “cowards” in a long and fiery diatribe.

WEEI has removed the segment from its website, but Awful Announcing obtained a copy of the audio. Here is the crux of Minihane’s rant:

“All we did was say that we don’t believe Adam Jones. All we did was say we don’t believe that Red Sox fans are inherently racist. The Red Sox disagree. Red Sox fans, your organization thinks you’re racist. Or, by and large, think many of you are racist. We went for the weekend, we tried to straighten it out, we tried to get comments. Nobody from the Red Sox—[director of corporate communications] Zineb Curran, [team president] Sam Kennedy, [VP of marketing and broadcasting] Colin Burch, is that his name? I reached out to him. No response from anybody. Nothing. So I guess they stand by their quotes.

“This woman, this journalist, they’ll respond to her, when she checks in. They’re happy to respond to her. But us? This little morning show that they happen to carry their games on that’s doing fairly well, who was called racist by this woman, when we try and get a response back from them? Nothing. Cowards. Sam Kennedy’s been a coward, Zineb Curran has been a coward, Colin Burch has been a coward, [principal owner] John Henry has been a coward. [Chairman] Tom Werner, he was probably at [Bill] Cosby’s house this weekend, he’s a coward. They are all cowards. They have nothing to say, so they stand by this. I shouldn’t say they’re cowards, they stand by this. They think that you’re racist, Red Sox fans, they think Kirk Menihane is racist, they think Gerry Callahan is racist, they think Lou Merloni is racist because he threatened to beat up white protestors with a baseball bat, which was joking. The think Glenn Ordway is racist. They’re OK with the afternoon show. They think Rob Bradford is racist, which, if we can get to some sound of that later, is true.

“But this is what they think. They think that you fans are racist, they think that WEEI is racist, and that’s what I’m talking about when I say institutional arrogance from the top to the bottom.”

Minihane continued, asking the Red Sox to apologize for former owner Tom Yawkey’s famous racism and asking Werner to apologize for his willingness to work with Bill Cosby even after the former sitcom star was accused of rape. Throughout the diatribe, Minihane argued that if the Red Sox think WEEI is out of line in its commentary relating to race, they must think the same of the fans who listen to WEEI, in an apparent attempt to turn the show’s listeners against the local team. The host also criticized Red Sox executives for declining Kirk & Callahan’s requests to come on the show, suggesting they “don’t have the guts.”

This tiff between the Red Sox and the WEEI hosts began last week with an article in Boston entertainment and arts publication DigBoston, written by journalist Britni de la Cretaz. The piece explored examples of racism in Boston sports and particularly Boston baseball and suggested the Red Sox didn’t do enough to curtail bigotry among fans and media. Red Sox spokesperson Zineb Curran issued this statement:

“None of the opinions or sentiments expressed on WEEI or any of the 57 radio affiliates throughout New England are those of the Boston Red Sox. We understand the frustration of those who feel the opinions expressed are offensive and out of line. At times, we feel the same way.”

After he had lambasted the Red Sox for a while over Curran’s statement to DigBoston, Minihane turned his anger toward de la Cretaz, claiming her story had “50 errors, 60 errors,” criticizing her sourcing and snickering at the fact she doesn’t shave her legs and has written publicly about her sexual experiences. Kirk & Callahan guest and WEEI personality Rob Bradford described her as “off the rails.”

Minihane and Bradford repeatedly praised a post by Massachusetts-based blog Turtleboy Sports that featured the following headline: “Feministo Journalist Who Ripped Boston And WEEI For Being Racist Also Bragged About Having Herpes, Not Having Sex With Her Husband Or Shaving Her Legs, And Made Up A Fake Rape Story For Twitter Points.”

In gleefully bashing de la Cretaz, Minihane asked numerous times why the Red Sox would offer her a statement but not appear on his show.

“The Red Sox are panderers. They are the most pandering organization in America. I wouldn’t work for them if you cut me a check for $100 million. They’re pukes. Top to bottom, the organization is loaded with pandering vomits.”

Minihane didn’t appear worried about risking WEEI’s relationship with the Red Sox, which the sides recently extended through 2023, though he did acknowledge on air that, “I may get into a little trouble today,” according to the Boston Herald.

We have asked Kirk & Callahan why the segment was deleted from the WEEI website and will update this post if we receive a response.

UPDATE: Minihane was reportedly encouraged to take a few days off, in what sounds an awful lot like a suspension.

Not a suspension. There will be no issued apologies or walkbacks. Just a couple cool off days. Back on 8/7

Some colleagues are calling it a suspension. WEEI says he's on vacation next week and it was suggested he take the rest of this week too. https://t.co/uV4pq5zUtd