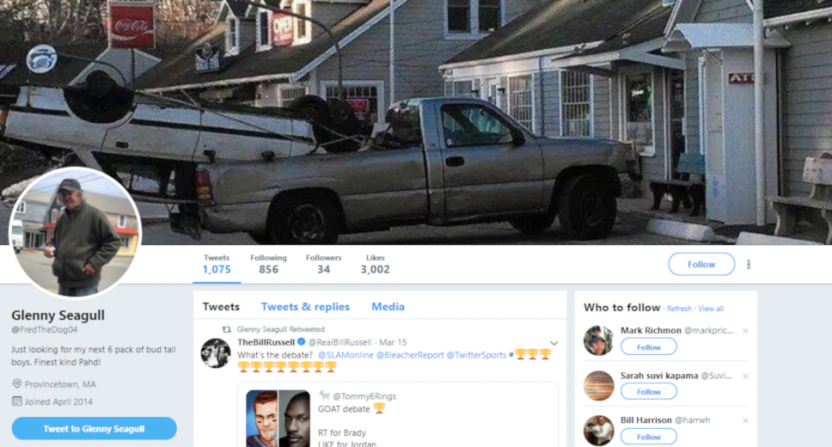 Properly attributing who broke news matters, which is why ESPN in particular was criticized for dubious measures there for a long time (they’ve since improved significantly). So, at base, there might be some merit to WEEI’s Alex Reimer’s “Refusal to credit Christian Fauria for Zdeno Chara news is institutional arrogance in its worst form” piece, if Fauria did actually break that news and was deliberately not credited by other outlets.

However, looking into this story (which involves Fauria, a former NFL player turned WEEI host, saying on-air Tuesday that Boston Bruins’ captain Zdeno Chara’s jaw injury suffered Monday was in fact a broken jaw) a bit more suggests the story may not be quite as clear as Reimer claims, and that someone else going by “FredTheDog04” made the same claim Fauria did first. Here’s part of what Reimer wrote:

Christian Fauria was the first person to report Tuesday that Zdeno Chara had broken his jaw. Fauria shared the news before 2:30 p.m. on OMF, but it took at least three hours for other outlets to pick up the story. That’s because the snobby hockey press refused to run with Fauria’s report, instead waiting for one of their own to add his or her confirmation.

It is institutional arrogance in its purest form.

“So we have our own insider, he’s a little bit more reliable, especially when it comes to injuries to players. So what are you hearing there, big fellow?” “One, he’s done.” “What do you mean he’s done?” “He’s done. I can quote it, ‘Doneski’ is what I got. ‘Doneski.'” “Zdeno Chara’s done for the series?” “Done for the season.” “Noooooo…” “What? Okay, well, then, we’ll find out on Thursday. Doneski.” “Why are you questioning him? He’s been good at this.” “Because he’s got this son-in-law that’s giving him all this practical knowledge on hockey and he’s running with it like it’s inside information when it’s really not inside information like I got.” “I got the real inside information. Not playing, done.” “What’s the injury?” “Broken jaw.” “Yes, so you think that’s it?” “That’s it. He’s done. I can quote this.” “Doneski? How do we spell doneski?” “D-O-N-E-S-K-I. That’s a quote. That’s it.”

All right, so, Fauria is spelling out “broken jaw” (although only partway into this), and he is quoting a source (and it’s definitely believable that a hockey source would talk in terms like “doneski”). But it’s notable that even Merloni pushes back on him and questions his “inside information”: if your own co-host isn’t entirely convinced by your report, it’s hard to expect the rest of the world to be. And it’s also worth noting that this report was far from the first suggestion that Chara had a broken jaw, something that wasn’t too hard to guess at based on the puck he took to the jaw and the way he returned to the bench with a face shield and didn’t play further.

Let’s look at some of the tweets from Monday night (when the game and the injury took place) in chronological order, coming from everyone from journalists and other radio personalities to average fans:

That sure looks like a broken jaw for Chara. Not sure what that means for game 5. The St. Louis wins have come when the Bruins were down to 5 d-men FWIW.

Who’s gonna play on left defense since Chara obviously has a broken jaw? It wasn’t pretty tonight, but someone will learn to play left defense in 2 days, riiight.

I’m about 99% sure Zdeno Chara has a broken jaw. Advised not to return. Reports of him hardly being able to talk on the bench when returning. No cuts/stitches would keep him out of the game.

Any chance Chara has a broken jaw?

And earlier on Tuesday, “FredTheDog04” on Twitter claimed to have a locker room source, and cited a “fractured mandible” (which is another term for a broken jaw) hours before Fauria’s report. He then followed up with “chipped tooth and broken jaw” later:

He’s got a fractured mandible. Just can’t see him playing.

I’ll just say I know someone in one of the locker rooms. Chara couldn’t talk last night. Chipped tooth and broken jaw.

So really, shouldn’t the “institutional arrogance” label be applied to everyone who didn’t credit FredTheDog04? He’s the KatyPerrysBootyHole and WetButt23 of this story. Or maybe that’s @BigBearPDX, who said Wednesday that Chara “obviously has a broken jaw” (although, unlike FredTheDog04, he didn’t cite a source.) Or maybe it’s the likes of Seravalli or Murphy, known hockey figures who suggested a broken jaw Wednesday (although both hedged a bit and weren’t as definitive as Fred, Big Bear or Fauria).

Now, granted, media outlets don’t often credit anonymous Twitter users, and for good reason; a lot of definitive anonymous tweets turn out to be not true. But then the question becomes if Fauria has significantly more credibility as a hockey reporter than an anonymous Twitter account, and enough credibility to make it worth it for other outlets to run with and credit his report. Reimer sort of claims he does, but then also addresses the issues with citing talk hosts:

The trepidation to run with Fauria’s report isn’t solely rooted in his lack of hockey journalistic credentials. Sure, that may be the case nationally and north of the border, but Fauria is well-known in this city. He played five years for the Patriots –– winning two Super Bowls ––and has worked in media for the better part of the last decade. In addition to Fauria’s work with WEEI, he’s been a staple on CBS Sports Network’s college football coverage and previously served as a college football analyst for ESPN.

If Fauria still solely worked for those outlets, it’s likely one of our local aggregators, such as NESN.com, would’ve posted the item immediately. But he’s a talk radio host now, and as a result, must be looked down upon. Thus, it was imperative to wait for a “capital-J journalist,” such as Athletic Blues beat writer Jeremy Rutherford, to confirm the story before publishing.

The apprehension is understandable to an extent. After all, talk show hosts spend most of their time on the air acting as obnoxiously as possible, and aren’t always held accountable for missed stories. If Chara did not have a broken jaw, for example, Fauria’s credibility as a talk show host wouldn’t suffer. At their cores, talk show hosts are entertainers, not journalists.

But that doesn’t mean talk show hosts can’t practice journalism, as Kirk Minihane showed last year with his Kevin Cullen takedown. In this case, Fauria was citing a source. He wasn’t bloviating.

Okay, but Merloni’s immediate pushback on Fauria’s report illustrates that report wasn’t universally believed by even his co-host. And national outlets in particular tend to be very careful with stories coming from local radio; as Reimer notes, “at their cores, talk show hosts are entertainers, not journalists.” And Fauria’s football playing career and stints doing college football analysis don’t really add to his credibility as a hockey reporter. So not running this as fact until it was confirmed by someone actually on a hockey beat has some merit.

Now, there’s a difference between caution in running with something and deliberately refusing to credit someone who was first after that story’s been confirmed. And Reimer has more of a point on that front. It’s notable that Rutherford used the wording “A source familiar with the situation confirms to @TheAthleticNHL that Boston defenseman Zdeno Chara has a broken jaw”; “confirms” illustrates he was aware there was already talk out there of a broken jaw for Chara (although that could be referencing suggestions of that Wednesday night from the likes of Seravalli and Murphy, not Fauria’s Thursday afternoon report), and so, yes, reporting on Rutherford’s report probably should have come with some discussion of earlier comments on that front. And that  should have included Fauria’s comments. And it’s possible that WEEI competitors deliberately chose not to do that, and that’s not great.

But overall, the “institutional arrogance in its worst form” claims from Reimer feel a bit strong. National outlets not immediately picking up an unconfirmed hockey report from a talk radio personality known for his football career seems more responsible than anything else. And if the argument is only that the information matters, not the source, well, while Fauria’s information proved to be right in the end, so did FredTheDog04’s. Sure, it makes sense to link Fauria’s report in pieces referencing this, and Fauria now has some more hockey credibility thanks to this report turning out to be accurate. But so does FredTheDog04.