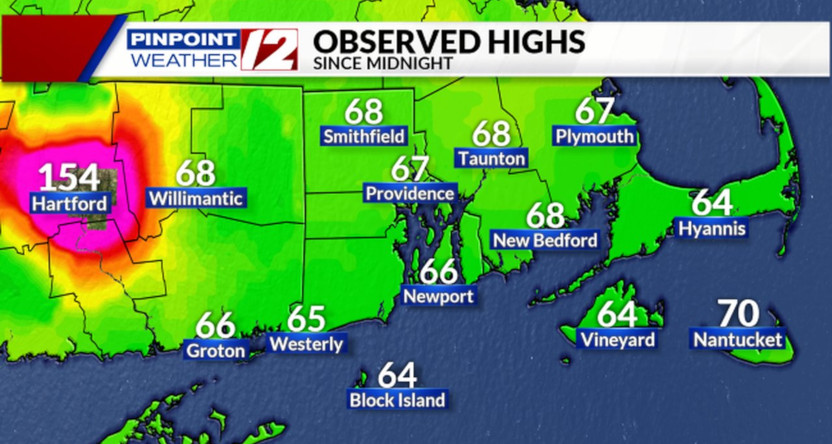 Keith Olbermann once said that the center of hell is Bristol, Connecticut, but as per graphics from at least a couple of TV stations Saturday, the inferno may actually be located elsewhere in the state. Graphics on multiple stations put Hartford at an incredible 154 degrees. This first came up with a graphic tweeted by WPRI (Providence, Rhode Island CBS affiliate) meteorologist T.J. Delsanto:

Here's a look at the high temperatures so far today… pic.twitter.com/33kHs0BypZ

Of course, many people noted that error, and Del Santo responded that it wasn’t from him, but from the base data supplied to multiple stations:

it's obviously a mistake that every other tv station in the area would be dealing with.

And yes, that seems to be the case, and even beyond that immediate area. @DanielAshley13 tweeted a graphic from NBC Washington’s Storm Team 4 that also had Hartford with a high of 154:

if you're in Hartford or the surrounding towns (my old home), I hope you've got a lot of ice water to keep yourself hydrated properly. pic.twitter.com/0VLsRioMwE

How does that happen? Well, 154 Fahrenheit is 67.8 Celsius, and the actual high temperature in Hartford Saturday was around 68 Fahrenheit. So it seems quite possible that someone entering data entered the Fahrenheit number instead of the Celsius one, and then the pre-programmed conversion turned it into Fahrenheit anyway and made it seem insanely hot. That’s the theory NWS Boston meteorologist Torry Gaucher laid out (METAR is a weather-reporting format):

It’s either that or Lucifer’s emerged from the ground in Hartford. And let’s hope it’s not that, as that would bode poorly for the chances of bringing back the Whalers.