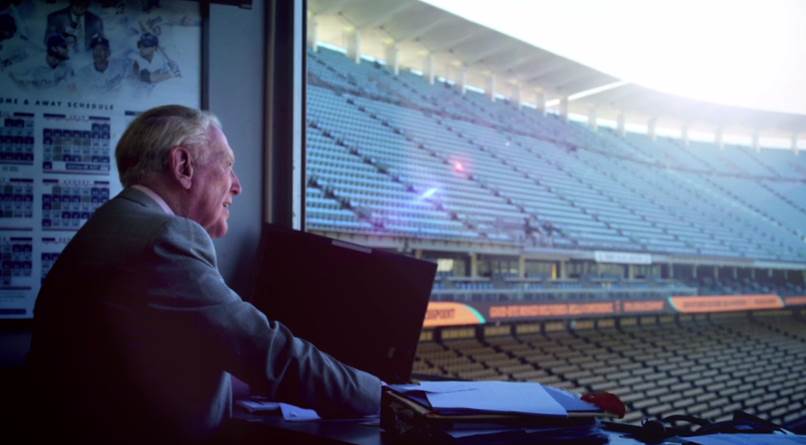 The 2017 MLB season will be the first one in 67 years without Vin Scully in the broadcast booth, but the legendary announcer is still in the news. Ben Nuckols of The Associated Press spoke to Scully about retirement and his plans for the year, but also the news that the Library of Congress has selected his call of the final Dodgers-Giants game at New York’s Polo Grounds for preservation (alongside N.W.A.’s Straight Outta Compton album, a very different work related to Los Angeles). Scully said that September 8, 1957 game has long been one of the most memorable for him:

Scully spoke to the AP because the Library of Congress has announced it will preserve his call of a 1957 game between the Dodgers and the New York Giants at the Polo Grounds, the final time they played at the hallowed old stadium. Both teams moved to California after that season, opening up the West Coast to Major League Baseball.

Scully’s call of Sandy Koufax’s 1965 perfect game is more famous. But that game at the Polo Grounds meant more to him personally, because he grew up going to games there, cheering for the Giants and dreaming of watching from the press box.

“It was so meaningful to me. I’m not sure what it really means to baseball fans anymore,” Scully said. “The sands of time have washed over the Polo Grounds. But for me, it was one of the more memorable games I was ever involved in.”

During that broadcast, Scully implored the players to take their time before there franchises left town: “Let’s take it easy, we just want to take one last lingering look at both of you.” The Library of Congress called it “a masterful example of the artistry that great sports announcers bring to their work, as well as their empathy for players and fans.”

That’s certainly a highly-significant moment for baseball. It wasn’t the final game at the Polo Grounds, which came later that month, but it was the last time the Dodgers played there. It was a highly-emotional moment as well.

As for the present, Scully’s adjusting just fine to life outside the booth. He told Nuckols he doesn’t plan to go to many games, as the last time he went as a spectator (for a Dodgers-Yankees World Series game in the late 1970s) wasn’t appealing, saying “I realized that although I love the game, what I loved more was broadcasting it.” However, he’s not feeling regrets about his decision to retire.

“All summer long, I expect to get feelings of nostalgia, wistfulness, whatever the word may be, but no, I am comfortable, I do know in my heart and soul I am where I should be, and that really is all I need,” he said.“Sure, after 67 years, you’ll bet I’ll miss it,” he added. “But heck, I miss the guys I hung out with when I was in school.”

Many baseball fans will certainly miss Scully’s broadcasts, too. But it’s good to hear that he’s adjusting well to life outside the booth, and that he’s where he knows he should be. It’s also good to hear that his end-of-an-era Polo Grounds call will be preserved, and appropriate that that comes at the end of Scully’s own broadcasting career. He may not be in the booth this year, but much of his work there over the decades will be long-remembered.