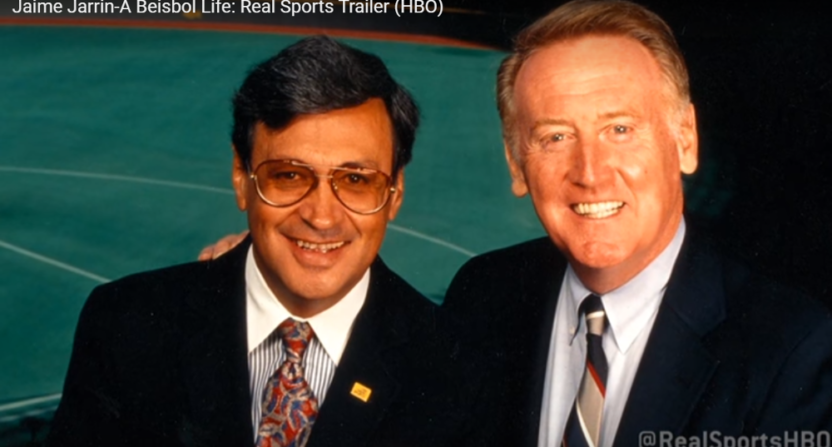 There was plenty of attention paid to Los Angeles Dodgers’ voice Vin Scully retiring after 67 seasons with the club last year, and deservedly so, but a less-covered national story has been the long-term excellence displayed by another Dodgers’ voice, Jaime Jarrin. Jarrin has been calling Dodgers’ games in Spanish since 1959, one year after the team came to Los Angeles, and he’s still going strong at 81. He was inducted into the Baseball Hall of Fame in 1998, and HBO’s Real Sports is now exploring his career with a segment that will air on their next program, Tuesday night at 10 p.m. Eastern. That segment includes commentary from Jarrin himself, plus Scully’s thoughts on his long-time colleague.

There’s a fascinating story about Jarrin’s start in there, and one that shows off his talent. The Dodgers didn’t originally send the Spanish announcing team on the road, so for Jarrin’s first six years, he would listen to Scully’s English-language call from a studio in Los Angeles and recreate it for the Spanish-language audience. That’s discussed in this clip from the upcoming Real Sports segment:

“He would listen to us in English, somehow translate it immediately and do the game. Remarkable talent,” Scully said. “I was in awe of what he could do.”

HBO’s Bryant Gumbel then asked Jarrin about how that translation of Scully’s broadcast helped him learn to call baseball (it’s notable that only a few years before starting work with the Dodgers, Jarrin had never seen a baseball game; he’d done a lot of broadcasting work in his native Ecuador, but hadn’t seen baseball before immigrating to the U.S. in 1955), and Jarrin said “Oh yes, that was a great school. That helped me a lot.”

Scully then went on to talk about how he’d throw in extra details on the road to give Jarrin more information to work with.

“I would give him some things that he could use in his broadcast, so I would say ‘It’s a brilliant blue sky,’ or ‘There’s a breeze blowing in,'” Scully said. “I would try to give him things that being home, he would not be aware of, and he was clever enough to work that in.”

Jarrin said that extra help was proof of Scully’s generosity.

“He didn’t have to do that, but he did, and he became my teacher, my idol, my friend.”

Scully said working with Jarrin was a treat for him.

“We got along so exceptionally well that I would have given him the shirt off my back if it would have helped his broadcast.”

It’s great that Scully and Jarrin were able to make that work so well, but it’s interesting that this kind of remote broadcasting to save money was an issue way back when. It’s something that’s surfaced a lot more recently, with many networks having announcers call games off monitors in remote studios (which is much easier than translating someone else’s report on the fly) in order to cut down on production costs. Remote broadcasting carries challenges, though, as this clip illustrates, and even if it’s easier today thanks to video technology, there are still some things announcers can miss by not being there.

That’s only part of Jarrin’s remarkable overall story, though, and what he’s accomplished throughout his 57 years in the booth is impressive. He’s provided great play-by-play for the Dodgers, and has also been involved in calling world championship fights (including the Ali-Frazier Thrilla in Manila), the Olympics, the World Baseball Classic, and various international news broadcasts. He became the longest-tenured active MLB broadcaster this April, and he’s set to keep calling Dodgers’ games through at least 2018. It’s terrific to see Real Sports spotlight such an interesting and important figure, and one who not a lot of people necessarily know about.