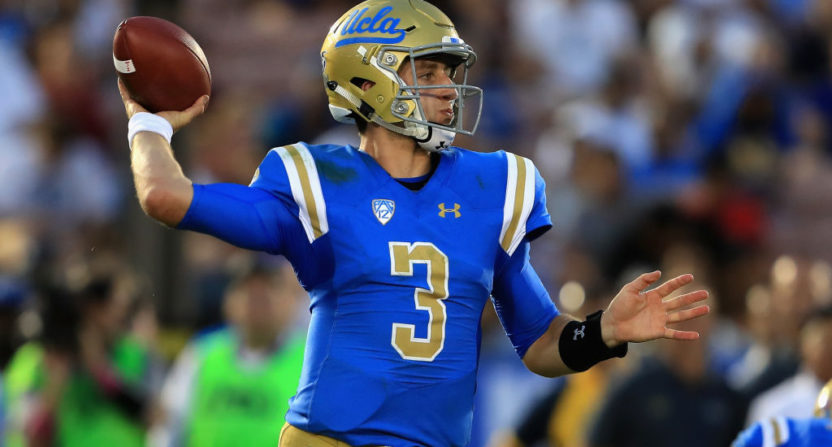 It’s totally understandable if you decided to give up on Sunday night’s Texas A&M-UCLA game when the Aggies took a 31-3 second quarter lead. Or when the score was 38-10 at halftime. For one thing, there were other college football games on. Maybe it was time to catch up on some DVR’ed TV or Netflix.

At one point, Texas A&M held a 44-10 lead over UCLA. Twitter was overflowing with takes about how overrated the Bruins were,how quarterback Josh Rosen had no help, how coach Jim Mora wouldn’t last the season, whether or not UCLA was a good college football job. It was ugly.

But the Bruins eventually pulled off one of the most improbable comebacks ever seen, rallying from that 34-point deficit for a 45-44 win. The decisive play was Rosen’s 10-yard touchdown pass to Jordan Lasley in the back left corner of the end zone with 43 seconds remaining.

Such an impressive play and spectacular comeback was sure to come with some memorable play-by-play calls and reactions. Gus Johnson went crazy on Fox’s TV broadcast. But what about the radio calls? Take a listen to UCLA radio announcer Josh Lewin call of that final touchdown, courtesy of IMG Audio.

With the thrill of victory on one side comes the agony of defeat on the other. Here is how Texas A&M radio voice Dave South called UCLA’s go-ahead score.

South’s call on the Texas A&M radio network is especially intriguing because some announcers might have sounded resigned and crushed in that moment. But South captured how exciting the play and comeback was, even if it was a tough moment for Aggies fans to listen to. He conveyed the moment, regardless of how it may have felt for the losing side. This was no Hawk Harrelson on-air sulk and walk away from the mic.

Of course, there’s an entirely different level of excitement from the home team broadcast. Lewin does an excellent job of describing the play — notably Rosen’s fake spike which may have made the difference — before erupting in excitement over an outcome that seemed impossible earlier in the evening. It’s a call Bruins fans may listen to repeatedly for years to come.