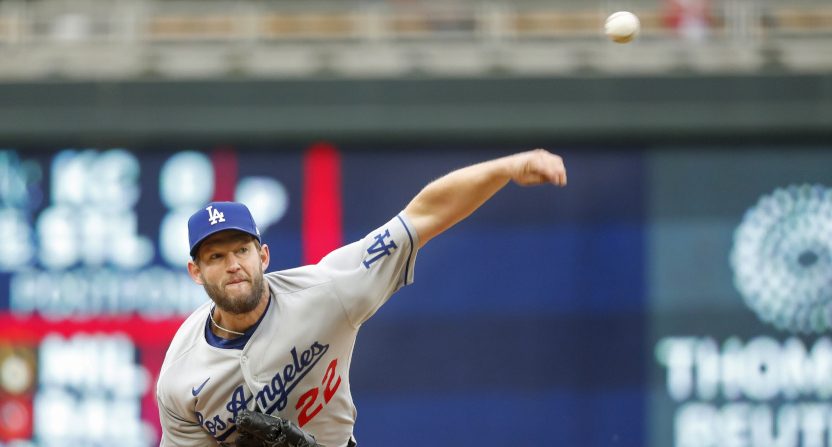 A difficult part of fully evaluating comments on a broadcast is considering the context they come in. Context does not excuse everything; certain remarks are going to cause problems regardless of the surrounding context.  But when it’s possible to obtain it, it’s worth considering the whole range of discussion on a topic, and that’s perhaps particularly true with game broadcasts when announcers are vamping on a topic for a considerable amount of time. And that’s notable with the Bally Sports North (the Minnesota Twins’ local regional sports network) broadcast of their 7-0 loss to the Los Angeles Dodgers Wednesday, which was most famous for Dodgers’ starter Clayton Kershaw getting pulled after an 80-pitch, seven-inning perfect start (which, for the record, was a decision he said he agreed with).

On that broadcast, announcers Dick Bremer (play-by-play) and Justin Morneau (color commentary) spent a lot of time talking about the Dodgers’ Kershaw decision. And there are some individual quotes from Morneau in particular that could be lit up as indications that he’s not in touch with the particular details of the situation, from Kershaw’s past injury history to the limited spring training action he got thanks to the MLB lockout. But, in full context, Morneau shows he’s completely aware of those limiting factors, and he understands why the decision was made; he just doesn’t like it. And that’s a reasonable perspective. Here are a couple of the early minutes of Bremer and Morneau talking about this, going off an in-game update from sideline reporter Audra Martin:

Martin: “It’s time for our Grand Casino story of the game. Whoever? Of course it’s Clayton Kershaw. His first start against the Minnesota Twins. it couldn’t have gone any better. No hits, no runs, 13 strikeouts on the day. 12 of them swinging. It was seven perfect innings, also marking his 66th career game with double digit strikeouts. What a day from Clayton Kershaw. Unfortunately, that is the end of his day. A lot of Dodger fans here in the building, guys, they are not happy to see a new guy out on the mound, which is understandable considering the performance we saw from Mr. Kershaw.

Morneau: I think a lot of the baseball fans are also disappointed not to see him out there. I think it’s part of the challenge with the game today, so much protecting guys, we’re getting robbed maybe of some special historic moments we could see. I completely understand why they’re doing it. It doesn’t mean I have to like it.

Bremer: No. But the concern, I think, for a lot of baseball fans, is if not today, when? When will we see a perfect game, or for that matter a no-hitter, again?

Morneau: Because the pitch count was really under control.

Morneau: That’s easy if it’s 105 over seven innings. How many times is a guy that efficient? 80 pitches with 13 strikeouts, you rack up that many strikeouts, usually the pitch count follows. Tough decision, but maybe not so tough for Dave Roberts.

Bremer: At the very least, Kershaw seemed amenable to it. He wasn’t despondent. He was cheerful, in fact, as he should be with seven perfect innings.

Morneau: I think he understands there’s six months of baseball, hopefully seven months of baseball left for that team that’s built to get to the World Series. There’s that understanding from a player’s perspective. [If he’s] 40 years old, on a last run on a team that’s lucky to finish .500, maybe you take a chance there. But he’s not done yet and they have a full season and they’re going to need him. I know i’m just explaining it, but still — hard to watch

Morneau: I would have loved to see history today. That’s all I’ll say. We saw history for seven innings.

After that, Bremer and Morneau continued to discuss the move for several minutes. They eventually got to a further discussion of the shortened spring training thanks to the lockout, which ended with Bremer calling a solo home run from Max Muncy (Nick Castellanos style).

Morneau: “Yeah, usually when a guy comes out of spring, they’re right around 95 pitches. The starters, they usually have somewhere around six starts. [This year], most guys have three, four.  Really, they’re on the fifth start and they’re still ramped up where they normally would be leaving spring training. That’s something to it, too. If he’s at 95 pitches, usually you push to 100, which would have given him 20 pitches to finish the last two innings

Bremer: Deep fly to right. Another solo home run for the Dodgers. Coming into play today they had just one. They’ve hit four home runs in the last seven at-bats.

What’s notable about this Bally Sports North discussion is that it very easily could have degenerated into hot take city. A perfect game that they would have had the chance to call, wiped out by the decision of a manager from the opposing team? And with that being a modern player health/injury history/shortened spring training-focused decision, that would have been quite easy for some old-school broadcasters to just keep lighting up. And Morneau and Bremer certainly approached that at times while expressing their own personal disappointment. But overall, in full context, this seemed like a reasonably thoughtful discussion of the pros and cons of the decision, with Morneau even saying that while he didn’t like the move, he understands why it was made.

Yes, this discussion went on for a long while, but that’s probably to be expected on a broadcast of a 6-0 game where the Kershaw pull was by far the most notable thing about it at this point. And yes, it’s possible there were some further comments from these announcers we didn’t catch that were more objectionable. But the comments in the clips above are interesting; some of them from Morneau in particular have the potential to be lit up if taken on their own, but in the whole context of this discussion, they’re more understandable. It’s fine for people to criticize pulling Kershaw; that criticism is just better if it comes with a discussion of why the Dodgers made that move. And the Bally Sports North broadcast did provide that.