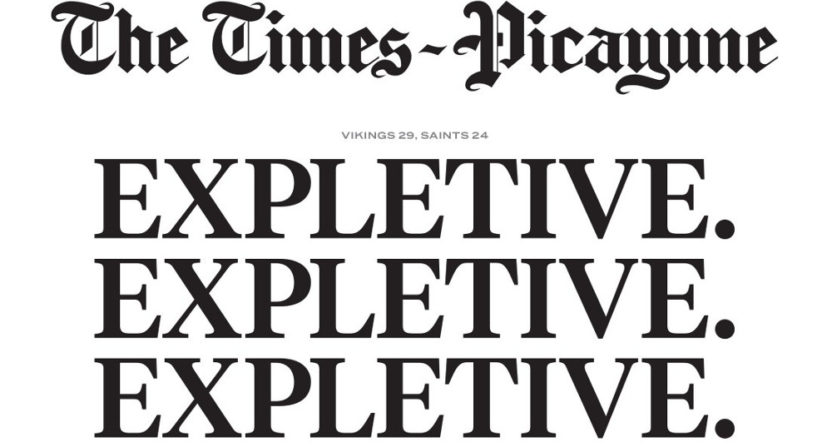 A local newspaper’s headline after a big win often receive a lot of national attention, but the headlines after a big loss are also often fascinating. The latest and greatest example along those lines comes from the New Orleans Times-Picayune in the wake of the hometown Saints’ last-second road loss to the Minnesota Vikings Sunday, a “Minneapolis Miracle” loss so improbable it motivated them to just run “Expletive. Expletive. Expletive.” on the front page:

Now that’s a way to show your dissatisfaction with an outcome. However, the paper’s sports section focused more on the post-game comments from pending free agent quarterback Drew Brees about how he wanted to return:

That’s good too, and is appropriate for the more in-depth look at what’s next for the Saints. But the “Expletive. Expletive. Expletive.” headline sums up many fans’ emotions perfectly, especially when paired with that beautiful shot of Vikings’ receiver Stefon Diggs running away from Saints’ defenders Marcus and P.J. Williams. That’s a rough outcome for the Saints and their city, but hey, at least it led to a good newspaper headline.