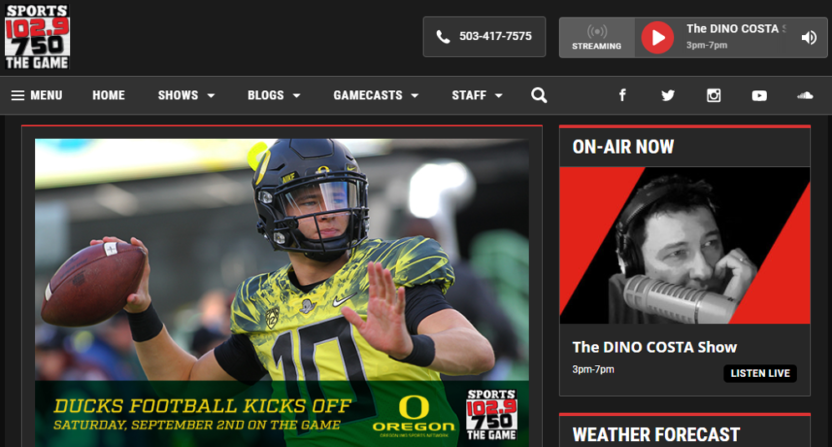 Controversial sports radio host Dino Costa is again creating some blowback, this time from the sports teams that have their broadcasts aired on the Oregon radio station he now appears on. Costa has a long history of causing controversy, and was notably in national news last year when his tenure in St. Louis ended six weeks after he was hired. He’s since signed on with Portland’s 102.9/750 The Game KXTG, where he regularly hosts the afternoon show (from 3-7 p.m. Pacific), and he called for protesters to be run over on a June 7 show there.

Update: Costa has now been let go by Alpha Media, which runs The Game:

Alpha Media issued a short statement, displayed at The Oregonian (which also mentions other controversies Costa created during his time in Oregon, from threatening to bring a “straight pride” flag to a Timbers’ game to saying women couldn’t host radio shows):

“After further review, Alpha Media has decided to cut ties with Dino Costa. Additional information is not available at this time.”

Fabulous news. I just came across the guy on Saturday. He deleted his Twitter account, but I saved one screenshot. pic.twitter.com/Qajfkhgfyo

You can listen to Costa’s June 7 comments here, or in the embedded player below, starting around 1:14:25.

Costa’s June remarks gained much more attention following James Fields driving a car into Charlottesville protesters this weekend, killing one and injuring at least 19 others. They prompted both the Portland Timbers and the University of Oregon (both have their games aired on 102.9) to issue statements disassociating their teams from Costa’s comments Tuesday, as Camilla Mortensen wrote in Eugene Weekly:

On radio KXTG (102.9 The Game) Dino Costa was discussing Black Lives Matter on his June 7 show when he called Black Lives Matter the “latest and most dangerous face of well-funded socialist communist organizations that have been agitating Americans for decades.”

Referencing an incident in Minnesota where protesters shut down a highway, he said, “You know these protests where they shut down the road, they lie in the road? If I’m the cops, I wave the traffic on. Listen, as soon as one or two of these sumbitches are run over you’ll see the entire, in unison, everybody be up off the street. When people are being killed by 18-wheel trucks coming by, pickups, cars. Run ’em over!”

He clarifies before the comments that his remarks pertain to Portland as well.

…Jimmy Stanton, UO’s senior associate athletics director, tells EW, “We were just made aware of these comments. We certainly don’t condone them, and we find them disgusting and reprehensible. We are raising our concerns with IMG and the station.”

Alpha Media and its station 750/102.9 The Game have been partners of the Timbers since our start in Major League Soccer in 2011.

The Game airs our live matches and our weekly Talk Timbers show. None of the opinions expressed on their other shows or other Alpha Media radio stations, specifically The Dino Costa Show, are those of the Portland Timbers. Nor do the Timbers have any say or input on the hires The Game chooses to make for its non-Timbers-specific live game programming.

The Timbers have and will always stand for tolerance, acceptance and diversity, and we understand the reaction that many of our fans have had to some of the offensive and insensitive views and opinions expressed on The Dino Costa Show. In no way do we condone those views, as they go against our fundamental values and beliefs as a club.

We are under contract with Alpha Media through the end of the 2018 MLS season.  We will carefully evaluate our radio home at that time.

These aren’t the only remarks about driving into protesters that have received further attention following this weekend’s events, as Fox News and the Daily Caller both deleted a January article showing footage of cars driving through protests. But these have a significant sports connection, and it’s interesting that both Oregon and the Timbers are weighing in in these kinds of terms. Compare this to what we saw in Boston in July, where a Red Sox spokesperson commenting on WEEI programming said “We understand the frustration of those who feel the opinions expressed are offensive and out of line. At times, we feel the same way,” and a WEEI host subsequently went on an incredible rant calling the Red Sox cowards.

This perhaps goes to show an increased linkage between networks’ game programming and what else those networks choose to air, at least in popular perception. It’s certainly true that the Red Sox, the Timbers and the Ducks aren’t determining what programming airs on their radio partners’ non-game shows, but at the same time, their decision to partner with specific radio stations gives those stations some legitimacy. And those decisions are a big deal, as game broadcasts bring in substantial ratings; those who try to argue that a day of non-game programming beats a week of game broadcasts are wrong. So who a team goes with for its game broadcasts matters. And there’s a case to be made that particularly problematic non-game programming on a broadcast partner still reflects poorly on the team. At the very least, it’s spurring some complaints, and Costa’s comments are the latest example of that.