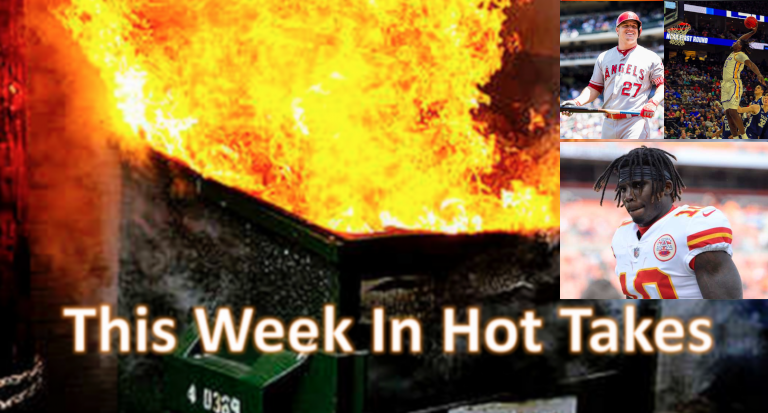 Welcome to another edition of This Week In Hot Takes. This time around, we’re breaking down the hottest takes from March 15-21.

5. Don Cherry criticizes William Nylander and Oskar Lindblom for talking to each other, says “They’re having a little love-fest, they look like they’re going to kiss each other”: After weeks of complaining about the Carolina Hurricanes’ supposedly attention-seeking celebrations (funny, considering that his whole career defines “attention-seeking”), Sportsnet’s Don Cherry has moved on to another dumb complaint. This week on Hockey Night In Canada, while dressed up for St. Patrick’s Day, Cherry decided to criticize the Toronto Maple Leafs’ William Nylander and the Philadelphia Flyers’ Oskar Lindblom for talking to each other ahead of a faceoff, and did so in a problematic way:

Don Cherry on Nylander and Lindblom being a little too chummy pic.twitter.com/BNBF4vSC0B

First off, players talking to each opponents is nothing new in hockey or in countless other sports (baseball regularly sees runners chatting with infielders and hitters chatting with catchers, basketball sees plenty of back-and-forth talk, etc), and it’s unclear why Cherry decided to go after these guys. Maybe them being Swedish was part of it, as Cherry’s long been known for his complaints about European players. But beyond that, the tone associated with “they look like they’re going to kiss each other” felt real homophobic. It’s yet another bad look for the 85-year-old Cherry, and yet another reason to question why he still has a high-profile analysis job.

4. Doug Russell says big contracts for Mike Trout and others is “why beer costs $12 at the ballpark:” Hey Google, show me a Wisconsin radio host who doesn’t understand economics:

Seeing baseball people saying that the Angels got a bargain in Mike Trout. Lay off the Kool Aid folks. Trout is a fantastic player…but he (and others) are why a beer costs $12 at the ballpark.

Linking player contracts directly to concession prices is absurd in general; concession prices are about how much money owners can get out of fans and how much fans will be willing to pay, while player contracts are about how much money players can get out of the revenues owners are making (most of which aren’t from the concessions). But Trout is a particularly bad case in point to cite here, as Angels Stadium has $4.50 16-ounce beers; owner Arte Moreno cut those prices in his first act as owner 16 years ago, and hasn’t raised them since. So, no, Mike Trout’s new contract doesn’t have much to do with the price of beer.

?️@ColinCowherd: "Nothing against Mike Trout, but if he was at a mall in Los Angeles no one would know…

Players really can’t win with some of these pundits; if they head to a talented team in free agency, they’re criticized for not having “loyalty” or just “chasing rings,” and if they stick with the team they’re with, they’re bashed for being “just about the money.”

But beyond that, Trout is plenty relevant, much more so than Cowherd. Cowherd’s move to FS1 has seen a dramatic decrease in his national profile, and it’s notable that The Herd on Tuesday (the day he made these remarks) didn’t make the top 150 cable programs for that day. The only FS1 show to even get in those ratings that day was Undisputed, at 131st overall with a 0.07 rating in the keydemographic of viewers 18-49, and 138,000 viewers overall. So Cowherd’s show was seen by less people than such quality programming as Lifetime’s Married At First Sight: Love Unlocked, Science Channel’s Secrets of the Lost discussion of Stonehenge, and ESPN2’s coverage of a Arkansas-Providence NIT game. Who’s the “rich and irrelevant” figure in the Los Angeles area again?

Meanwhile, over on ESPN, Stephen A. Smith once again displayed his tremendous knowledge of sports, talking with colleague Jeff Passan about the Trout contract and claiming that Mike Scioscia (who stepped down after the 2018 season) was still managing the Angels:

Shoutout to Stephen A Smith thinking Mike Scioscia still works for the Angelshttps://t.co/QnOaaUTXjg

2. Jeff Schultz argues that LSU “brought evidence of the sport’s seedy underbelly with them,” and that Yale’s involvement in the admissions scandal was “cute Ivy-level cheating”: With the LSU Tigers in the NCAA tournament despite suspending head coach Will Wade after a Yahoo report of his comments on a FBI wiretap that appeared to indicate him referencing a financial offer to a prospect, plenty of media have lined up to defend “amateurism” and jump all over LSU as supposed cheaters. Criticizing Wade for allegedly breaking NCAA rules can be a defensible take, but the takes have gotten much hotter than that, with Jeff Schultz (formerly of The Atlanta Journal-Constitution, now with The Athletic) providing one of the most heated.

Schultz argued that LSU brought the sport’s “seedy underbelly” with them into the tournament (despite Wade not being with the team and despite no players being suspended at this point). Even more heatedly, he claimed the Tigers were the ones “central to a federal corruption investigation” in first-round matchup with Yale. Yale was implicated in the much more serious admissions scandal, which saw unqualified people get into schools instead of deserving athletic prospects thanks to bribes, and which actually led to federal indictments (including of long-time Yale women’s soccer coach Rudy Meredith, who resigned last November after 24 years in charge of the team), but according to Schultz, that’s just “cute Ivy-level cheating“:

Welcome to the NCAA Tournament, LSU. It looks like you brought evidence of the sport's seedy underbelly with you. Cool.@JeffSchultzATL https://t.co/F1vN9t3TbF

No early tournament game drips with irony more than LSU-Yale. One program is central to a federal corruption investigation. The other doesn’t even give athletic scholarships. (OK — a former Yale women’s soccer coach was nabbed in the recent college tuition scandal for allegedly helping wealthy and privileged youths falsify admission papers. But that’s, like, cute Ivy-level cheating.)

LSU players say they are accustomed to dealing with distractions. But being viewed as a microcosm of what’s wrong with college athletics would seem to be more difficult to process emotionally than dealing with a losing streak or an injury.

Uh huh. Allegedly offering some of the incredible money made off college basketball to a player is “what’s wrong with college athletics,” not taking bribes to let unqualified students (some who never even played the sports in question competitively) beat out more deserving candidates. Sure.

1. Tony Rizzo says “We got beaten up when we were kids like it was nothing” in reference to battery investigation involving Tyreek Hill: Police are investigating two separate instances of alleged battery at Kansas City Chiefs’ receiver Tyreek Hill’s residence, with those allegations reportedly revolving around Hill’s three-year-old son’s broken arm. Amazingly, that led to ESPN 850 Cleveland’s Tony Rizzo (also known as the guy who wanted to fight Browns’ fans planning an 0-16 parade, the “made man” who feuded with Joe Thomas and Dan Le Batard, and one of those who was there for Sabrina Parr’s “lean and the molly” comments) downplaying the severity of this:

“If it was the 70s, everybody would be in jail. Everybody. Kids got beaten up, we got beaten up when we were kids like it was nothing. Nothing. No one even blinked an eye.” “Broken arms by your parents?” “Boy, if I’d caught that wooden spoon or that frypan the wrong way, it might have been. I ain’t getting in between nobody and their kids.”

Yes, standards have changed since the 70s, but that sounds awful even for that era, and it’s unfortunate that Rizzo had to deal with that growing up. But that doesn’t justify downplaying this, or saying “I ain’t getting in between nobody and their kids.” We don’t know the full circumstances of the Hill investigation yet; no charges have been filed, and it’s not clear if Hill himself was involved in one or both incidents. But downplaying a three-year-old’s broken arm and a police investigation because “we got beaten up when we were kids like it was nothing” is a pretty hot take.