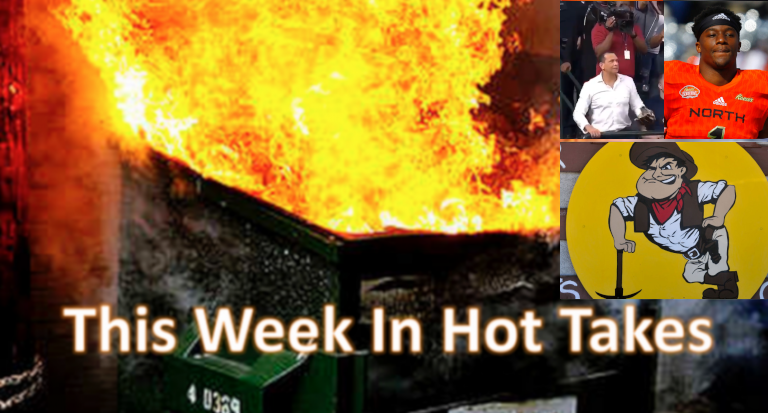 Welcome to another edition of This Week In Hot Takes. This time, we’re looking at the hottest takes from April 26 to May 2.5. Bob Nightengale writes there’s “no scientific evidence the ball has changed”: There’s been a lot of research indicating that MLB’s baseball was more aerodynamic (“juiced,” producing more home runs) than the norm in 2017 and again so far this year, with a MLB commission of scientists and statisticians even confirming that in 2018. Despite all that, USA Today‘s Bob Nightengale decided to write an equivocating piece on the issue this week, headlined “Is MLB’s ball juiced? Home runs are being hit at record pace and pitchers just want the truth.”And while that piece includes players saying the ball’s different, numbers on the amount of home runs being hit, and even “MLB commissioned independent reports last year which determined there is less of a drag on the baseball,” it also includes MLB commissioner Rob Manfred chalking it up to “the baseball is a hand-made product that is almost exclusively made from natural products” and “the result of that is there’s going to be some variations in baseballs.” And the really bizarre line comes not from Manfred, but from Nightengale himself, where he insists that there’s “no scientific evidence the ball has changed” despite the aforementioned independent reports confirming that it had (in 2017, at least) and despite the research this year that’s shown dramatically lower drag again. Here’s how he writes that:

“Still, with no scientific evidence the ball has changed, the tell-tale sign that something is dramatically different, pitchers say, is the way so many hitters are reacting when they hit the ball.”

That is a completely rubbish sentence. There is scientific evidence the ball has changed. The quotes from David Price on hitters’ reactions that follow are fine, but they don’t prove anywhere near as much as the actual data, and the data goes beyond equivocation. And Nightengale got rightly called out for it:https://twitter.com/dj_mosfett/status/1124029973453529093Rob Arthur, the author of that linked Baseball Prospectus piece, had his own thoughts on this:https://twitter.com/No_Little_Plans/status/1124030547406331904Indeed. It hasn’t been a good run for Nightengale recently, as he also was pilloried for his puff piece on Addison Russell returning from a domestic violence suspension, which was pretty much just Russell talking about how he’s overcome adversity and deserves a second chance. It included no comments from victim Melissa Reidy, domestic violence experts or anyone beyond Russell, Cubs’ president Theo Epstein, and Cubs’ rookie team manager Carmelo Martinez, but it did include Russell comparing his comeback to that of Tiger Woods. So, you know, Nightengale clearly has a great sense of what’s really important in these stories. But hey,  at least the Cubs’ vice-president of communications probably doesn’t have a problem with his coverage.Rating: 🔥🔥4. Michael Schmidt asks about A-Rod on Sunday Night Baseball, saying “In what other industry would leaders so dramatically embrace and celebrate someone who trampled on the values they claim to be most important?”: Criticism of Alex Rodriguez can be valid; he received multiple performance-enhancing drug suspensions from MLB (including for the Biogenesis scandal in 2013, detailed in the recent Screwball), there are people who didn’t like him as a player for other reasons, and there are plenty of reasons to complain about his performance in the Sunday Night Baseball booth. But Michael Schmidt of The New York Times (who, for the record, is not former baseball player turned analyst Mike Schmidt, who’s also shown up here) had rather a hilarious criticism of A-Rod this week, suggesting that his redemption narrative is unprecedented in other fields:https://twitter.com/nytmike/status/1123243123927388160As a million people pointed out to Schmidt, those who “trampled on the values they claim to be most important” are regularly rewarded in other fields, including politics (Schmidt’s regular beat), banking, corporate leadership and more. Blasting ESPN and Fox for employing Rodriguez is one thing, but suggesting that it’s only sports where the scandal-plagued get second chances is absurd.Rating: 🔥🔥3. Gary Bettman claims Boston University CTE researchers told him “hockey and football are not the same,” “there have not been conclusive determinations,” gets called out by those researchers: Boston University’s renowned concussion research team has been the subject of quite the takes recently, including ex-ESPN analyst and current war on concussion research leader Merril Hoge saying they “cheat, lie, and abuse/suppress science.” This week, they were the subject of an international hot take, with NHL commissioner Gary Bettman testifying before a Canadian parliament committee (the House of Commons Subcommittee on Sports-Related Concussions) and claiming “Based on everything I’ve been told — and if anybody has any information to the contrary, we’d be happy to hear it — other than some anecdotal evidence, there has not been that conclusive link” between hockey and concussions. What really elevated Bettman’s take was where he attempted to say the BU researchers had told him wasn’t as risky as football, a take that got called out by those researchers:https://twitter.com/rwesthead/status/1124123654772621312It’s understandable why Bettman wants to be careful with his comments on concussions; the NHL recently settled a lawsuit with 318 former players for $18.9 million ($22,000 each), and there could be further litigation against them from players who weren’t covered by that or didn’t opt in. But misrepresenting what researchers told you is not a good look.Rating: 🔥🔥🔥2. Mike Francesa questions Giants’ draft pick Corey Ballentine’s character because he got shot, then denies he said that: Francesa’s often known for his “I never said that!” attempts to distance himself from what he actually said, but the moment he delivered on that front this week was impressive even by his own standards. On both his app and his show Monday, Francesa implied that the Giants couldn’t talk about draft pick Corey Ballentine’s good character because Ballentine was shot at a house party Saturday (Ballentine is recovering, but his friend was killed).https://twitter.com/BackAftaThis/status/1122865862204166149″When you finish your draft and stress how you went out of your way to take the right kind of guys, guys that you want on the team, guys that are going to be great character guys, and you stress that as strongly as the Giants did, it looks pretty bad when one of them gets shot on a Saturday night. It does not look good. It’s just more of the same for the Giants, who just can’t get out of their own way, no matter what they say.”https://twitter.com/BackAftaThis/status/1123051950273122307That led to Francesa getting criticized by Ballentine’s father (who said Ballentine “is the kid that that guy [Francesa] wished he had as his son” and “My son is a grown man. He can go out and celebrate a little bit. Who doesn’t go and and celebrate with their friends?”) and by WFAN morning hosts Boomer Esiason and Gregg “Gio” Giannotti. And that led to Francesa calling in to Boomer and Gio and claiming they were taking him out of context (they weren’t):https://www.youtube.com/watch?v=-gJ1D_AGsEc

“I said this can be very iffy, if it proves the kid was doing something wrong or in the wrong place, that can make the Giants look very bad. I said we have no information. That’s how I opened it up.”

That’s not the thrust of what you said at all, Mike, especially on the app show. And not only coming out with this atrocious take about a shooting victim, but then trying to defend it by claiming you didn’t say what you said, is a heck of a take.Rating: 🔥🔥🔥🔥🔥

1. Phil Mushnick starts a column about mascot changes with “So I said to Joseph Goebbels, ‘Burn any good books, lately?'”: The Flyers and Yankees disassociating themselves from Kate Smith (over songs like “That’s Why The Darkies Were Born” and “Pickaninny Heaven”) recently and the Long Beach State 49ers disassociating themselves from the “Prospector Pete” statue and mascot last fall (over complaints about racism and genocide during the California gold rush) are moves that are apparently comparable to those made by Nazi Germany minister of propaganda Joseph Goebbels in Phil Mushnick’s mind. Here’s what the New York Post columnist wrote this week:

So I said to Joseph Goebbels, “Burn any good books, lately?”Recently in New York and Philadelphia, Kate Smith was disinterred, posthumously condemned to death, then reburied for singing, in addition to “God Bless America,” a racist song, 90 years ago. It’s called beating a dead corpse.That she spent America’s World War II years raising millions of dollars to combat genocidal master race Fascism and delivered a 1945 radio address decrying racial and religious intolerance was left ignored, unimportant or unknown.At roughly the same time on the West Coast, Cal State-Long Beach put to death a suddenly “inappropriate” on-campus regular, a fictional character named Prospector Pete, the school’s mascot since it opened in 1949.Prospector Pete, symbol of the California gold rush, last year had his statue removed from prominent view and now has been entirely “disappeared,” as the gold rush, according to the school, was “a time in history when the indigenous people of California endured subjugation, violence and threats of genocide.”