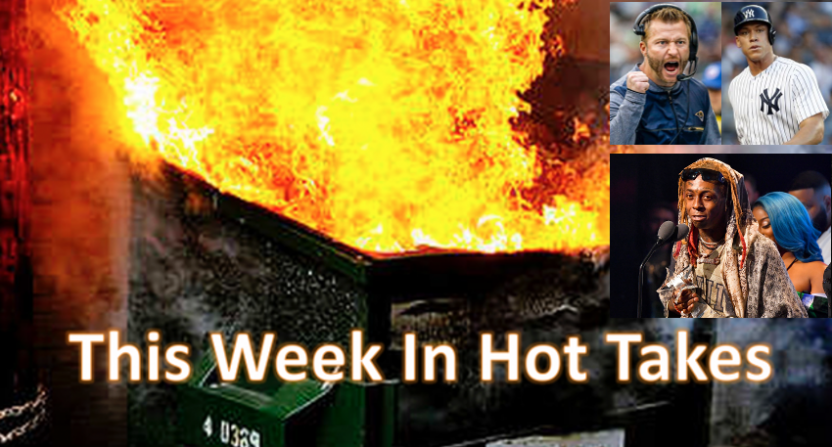 Welcome to another edition of This Week In Hot Takes, this time covering the period from Oct. 5-11.

5. Dan Shaughnessy says the Red Sox need to…play like a good team: The Montgomery Burns Award for Outstanding Obviousness In The Field Of Obviousness goes to Dan Shaughnessy of the Boston Globe, who, after the Red Sox’ Game 2 loss to the Yankees Saturday evened the ALCS, wrote a column that produced an amazing tweet from the Globe account:

The #RedSox need to play like the team that won 108 games this season when they take on the Yankees tonight, says @Dan_Shaughnessy. https://t.co/Xm1lfEWdqU pic.twitter.com/H1lh9SbRSF

“Good team should play like good team.” That’s some #analysis for you there, and it explains why Shaughnessy gets paid so much. Oh, and that wasn’t just an unrepresentative tweet. The whole “Red Sox need to be tougher to beat the Yankees” column is exactly what you’d expect:

They need to put on their big boy pants and start playing like the team that won 108 games this season.

They need to start playing like the team that effectively ended the American League East race in early August by sweeping the Yankees four straight at Fenway Park.

They need to start playing with the swagger and idiocy of the 2004 Red Sox, who beat the Bronx Bombers four straight times after falling behind, 3-0, in the ALCS.

“Big boy pants,” even. (Should “big boy pants” be hyphenated? I feel like it should; it’s a compound adjective describing the pants. But I’ve also put more thought into that than Shaughnessy put into this whole column, so.) And you just know that Shaughnessy was pulling a different kind of Monty Burns move after the Red Sox did, in fact, play like a good team in the next two games:

4. Trent Dilfer says Sean McVay “has scabs on his private parts”, restates “for the PC police”: This isn’t so much a hot take as a “what the hell?” take, but man, it’s definitely that from former ESPN analyst Trent Dilfer:

Dilfer later deleted that and followed up with this:

I will restate for all the PC police on Twitter. Sean McVay has insane courage to make that 4th down call on his side of mid field up by 2. If it fails he’s one first down from Hawks away from giving game away. It works so he’s #BoyGenius. #BrassOfBurglar

Saying a coach “has balls” is a tired comment in general, but not so much a hot take or a weird take. Dilfer made it weird with these phrasings, though (“scabs on his private parts”? “Brass of burglar”?).

3. Mark Teixeira says Aaron Judge “made a huge mistake”…by playing ‘New York, New York’? For most of the history of sports, there have probably been people citing unwritten rules and complaining about things that have nothing to do with the game. The latest example is ESPN MLB analyst Mark Teixeira, who went on Get Up Wednesday after the New York Yankees’ elimination in Game 4 of the ALDS Tuesday night and blasted Yankees’ star Aaron Judge for…playing ‘New York, New York’ at the Red Sox locker room in Fenway Park following Saturday’s Game 2?

Teixeira starts with praise for Judge there, calling him “the most recognizable player in all of baseball,” but then he goes into a whole lot of dumb criticism. “I think he made a huge mistake playing the Sinatra ‘New York, New York’ as you go by the Red Sox clubhouse…when you haven’t won anything yet, you want to stay humble. I look at Derek Jeter…Derek Jeter was never a guy to boast, especially before the series was even over. …You woke a sleeping giant. Aaron Judge has no rings. And I have a ton of respect for Aaron Judge, I think he will have rings. But when you boast — when you wake a sleeping giant in Boston — on your way out back to Yankee Stadium and then get your butts kicked two games in a row, I just think that you might want to let your bat do the talking. Because Aaron Judge’s bat will talk.”

Ah, yes, because the Red Sox wouldn’t have tried to win a playoff series if Judge hadn’t trolled them. Nope, that’s what did it. Not the whole postseason on the line thing or anything.

2. The New York Daily News lets Mitchell Nathanson write a dumb “modest proposal to save baseball”: Irish writer Jonathan Swift (known for Gulliver’s Travels and more) famously penned the satirical letter A Modest Proposal in 1729, which suggested that poor Irish families could raise money by selling their children for the rich to eat. Mitchell Nathanson (described as “a professor at Villanova School of Law, currently working on a biography of former Yankee Jim Bouton”) appears to be trying to emulate that in a New York Daily News piece titled “A modest proposal to save baseball,” but without any of the skill or wit, and without much of a point. Some “highlights” from Nathanson’s piece:

Regardless of where one sits on the political spectrum, the events of recent weeks have driven home a point no one can argue with: Baseball games are too damn long. Last season, the length of the average postseason game was over 3.5 hours, and the games played thus far this October have been no different.

…The solution is staring us right in the face, and I’m surprised nobody has thought of it yet. It involves another hot topic in baseball: analytics. Simply by applying what we know about the game thanks to the Sabermetricians, who have worked tirelessly to transform our national pastime from a pastural endeavor into something that more closely resembles an IRS audit, we can trim the length of the average baseball game down.

…Down to zero. You want a quick game? How about one that lasts 0:00? How? By thinking big. Forget the cosmetic changes, that tinkering around the margins that, at best, will cut a couple of minutes here and there. No, my suggestion is the ultimate solution to the problem: eliminate the games entirely.

Don’t laugh. Because thanks to analytics, I’m not so sure we even need the games themselves anymore. We have the metrics. We have the spray charts. I’m pretty sure that’s all we need.

…My suggestion also solves the ancillary gripes surrounding the postseason (you’re welcome!). Rather than complain about a particular playoff format that might lead to a less deserving club advancing over one that looks better on paper (I’m looking at you, Yankee fans), we avoid that problem altogether by not actually playing any of the series at all.

That’s not original (as long as statistics have been around, people have whined ‘Why bother playing the games, then?’), funny, or saying anything interesting, and it’s both a waste of time from Nathanson and a waste of space from the Daily News.

Oh, but it gets even better when Mushnick’s talking about music, and particularly about African-American artists. Some past highlights there include takes on Jay-Z (“As long as the Nets are allowing Jay-Z to call their marketing shots…why not have him apply the full Jay-Z treatment? Why the Brooklyn Nets when they can be the New York N——s?”), 50 Cent (“a vulgar, gay-bashing, women-trashing, assault weapon-cherishing, N-word-spouting gangsta rapper”), Chance The Rapper (“Chance records and sells pro forma, no-upside, can’t-expect-better-from-us, women-denigrating, blood-on-the-breeze rap…standard dehumanizing gangsta rap — young black men are N****s, he’s especially fond of dope and regards young women as a sub-species in over-and-out service to his immediate libidinous whims, especially oral sex”), Kendrick Lamar (“a rapper who has grown fabulously wealthy through lyrics that consistently refer to black men as “N—-s” [and the] vulgar degradation of women”) and Lil Jon (“standardized rapper — vulgar, N-wording, women-denigrating”).

Mushnick also went after Jemele Hill for having “unspeakably and unprintably vulgar rappers…who have helped resuscitate the N-word while boasting of their sexual degradation of women as hit-the-road whores, bitches and worse” as SC6 guests. (He really is just copying and pasting these criticisms, isn’t he?) So that provides some important context for why he decided the problematic part of Odell Beckham Jr.’s controversial ESPN interview was…Lil Wayne being there. Here’s a note from his most recent column, which is largely mad about Ron Darling apologizing for saying “chink in the armor” but then diverted into a shot at Lil Wayne:

It must be nice to be Phil Mushnick and have a permanent platform to lob the same criticisms at every rapper who shows up in the sports world. Real great columnisting there. And that’s why he’s in the top spot here for the second straight week. But hey, if he ever loses his Post gig, he can roll right over to Pitchfork and write “Vulgar, n-worded, women-denigrating lyrics. 1/10” for most albums.