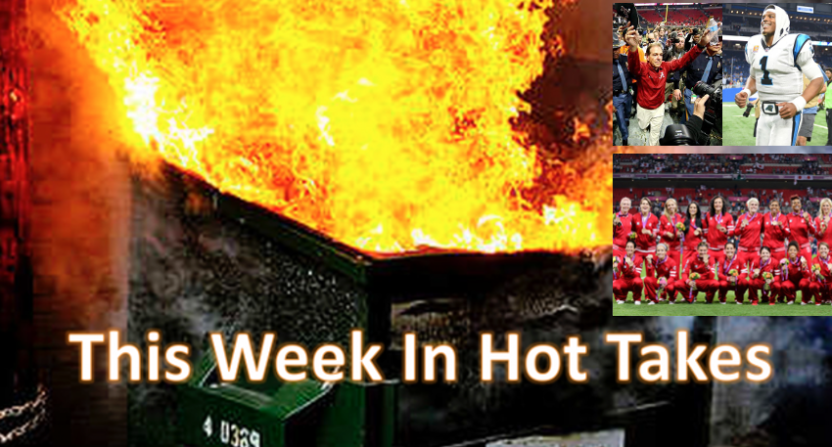 Welcome to another edition of This Week In Hot Takes, this time breaking down all the hottest sports media takes from Jan. 5-11.

5. Skip Bayless argues Alabama didn’t deserve playoff spot, Nick Saban “panicked” with QB switch: Undisputed‘s Skip Bayless doesn’t always talk about college football, but when he does, it’s likely to produce some takes. Thanks to much of the sports world being focused on the national championship game Monday, Bayless decided to tune in, and to unleash some Twitter takes:. The biggest one came after Alabama won, where Bayless insisted the Tide shouldn’t have made the playoff:

I still don't believe Alabama belonged in these playoffs.

And he threw in a backhanded compliment:

And went in on this on Undisputed Tuesday morning:

“I’m going to say it one more time: Alabama did not belong in these playoffs. Ohio State belonged in these playoffs. And Nick Saban, to his credit, was able to use that backlash against Alabama as us-against-the-world motivation in the Clemson game – which they won, which was far more impressive, to me, than the win last night against a Georgia team they should’ve beaten soundly last night ’cause it’s a meat-and-potatoes running team – which they can stop – with a freshman quarterback.”

The Alabama – Ohio State debate is so old and so pointless at this point, but those descriptors could also be applied to Bayless. And the “freshman quarterback” slam at Georgia is hilarious, considering that it took Alabama switching to their own freshman quarterback for the Tide to pull out a win. Naturally, Bayless hated that move:

Very surprised Saban panicked this early and went to Tagovailoa IN THE NATIONAL CHAMPIONSHIP GAME. Tua had an viral spin TD throw when it was 45-0 vs my school, Vanderbilt, but this is THE game.

Saban obviously made the right move to switch quarterbacks. Bama deserves to win this game.

I HATE FIELD-GOAL KICKING. SUCH AN ABSURD GIMMICK AND UNFAIR WAY TO DECIDE A GAME THAT HAD BEEN PLAYED SO WELL BY REAL FOOTBALL PLAYERS. I FEEL SORRY FOR EVERYONE ON THE BAMA TEAM AND FOR THAT POOR KID THRUST INTO THAT NATIONAL-CHAMPIONSHIP SPOT.

The all-caps tweeting is appreciated, as that’s how Bayless tends to talk. And it’s a further sign of how ridiculous and irrelevant most of his thoughts are.

Last November, @tldoublelift discovered he was getting cut by Team SoloMid while browsing @reddit. Now he has a new team and a new mission: Take TSM down. https://t.co/482fqR1Ifz

Look, no one’s making you read it, Keith. “How dare you cover this!” commentary is always funny, especially when it comes to Twitter, where it takes far more time to complain about coverage then to just scroll by to another tweet. It makes sense for The Players’ Tribune to cover esports, a growing area (see the estimated $90 million Twitch paid for Overwatch League streaming rights this week), and one where there appears to be an appetite for more details on the competitors. And there’s an argument that all sports are really “children’s games,” even the ones Olbermann famously loves:

I also agree that they should stop writing about baseball https://t.co/xgv7KW1a17

3. Colin Cowherd insists Cam Newton has help from Panthers’ “top-5 rushing offense,” but doesn’t give him rushing credit: Bad takes on Carolina Panthers’ quarterback Cam Newton are common, but Fox’s Cowherd was particularly funny this week, first blasting Newton’s supposed inaccuracy and then ranting about how much help he supposedly has:

OMG Cam Newton WR's dropped passes. Uh, did you watch the Titans/Chiefs game? Or Falcons/Rams? All QB's deal with it. Cam remains a regularly inaccurate thrower. Drops or not.

Stats don't lie. He misses more EZ throws than any QB in league. And this idea he has no support is BS. Top five rushing and defense. Plus good coaching

As Rotoworld’s Josh Norris pointed out, the “top-five rushing” argument is hilarious, considering that Newton rushed for 754 of the team’s 2,102 rushing yards, more than any other player.

I have no idea how the Panthers' top 5 rushing offense can be cited as support for the QB when Cam is the leading rusher. https://t.co/w61FDjlbNY

Shockingly, Cowherd didn’t back down even when the flaws in his logic were pointed out: 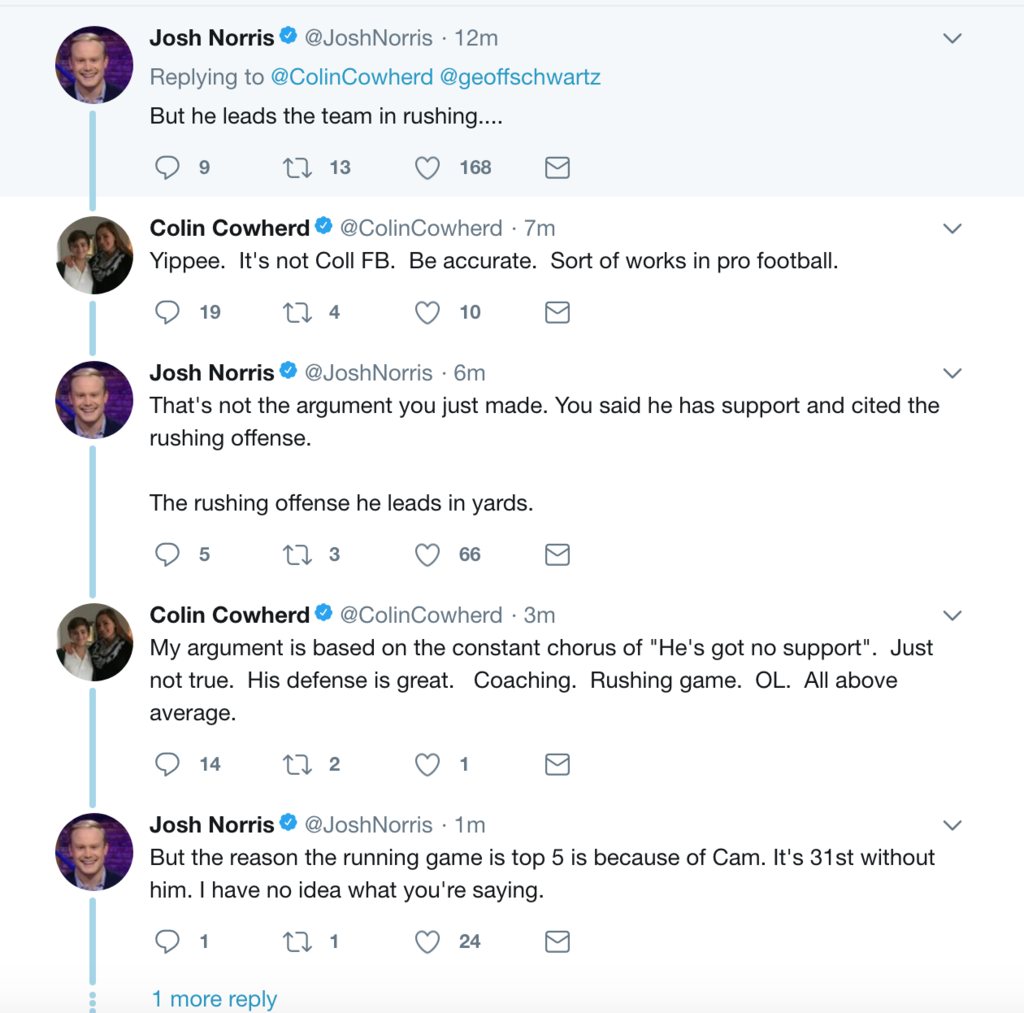 2. Stephen A. Smith thinks everyone at ESPN should stick to sports, except for him:  Smith unleashed quite the take in an interview with Michael McCarthy of The Sporting News this week, responding to a question about Jemele Hill and President Donald Trump by criticizing Trump while saying that ESPN personalities shouldn’t criticize Trump:

Do I believe the President should be wasting his time commenting about stuff like that? No. Do I believe the President has been a bit juvenile in his behavior? Yes he has. Having said that, it’s one thing to attack what he does, it’s an entirely different matter to attack him. When you attack him, then we are stepping out of our lane. We are a sports network. We have an obligation to wake up every day with the mindset that we not only speak for ourselves but we speak on behalf of the brand. It is not a brand that we own. It is a brand that employs us. It has entrusted us to represent it just as much as we care about representing ourselves. So with that in mind, we have to be cognizant of all those things.

Yes, the President is going to say what he has to say. Yes, he’s going to venture in our lane to the point where it’s apropos for us to respond. But we also need to be cognizant of the fact it’s incumbent upon us to leave it there and not extend beyond that point. We’re a sports network. You become successful. You sustain a level of success by giving people what they expect. By, figuratively speaking, ‘playing the hits.’ Not deviating too far away from what people turn on the channel and tune in for to hear. As long as we remember those kinds of things, then it’s going to lend itself to us being successful as opposed to us losing our bearings because we get caught up in our emotions, and we do things that ultimately sacrifice the brand and ourselves just to react to something for 15 seconds or 15 minutes. We have to be smarter than that — even if the President doesn’t appear that way sometimes.

First off, “stay in your lane” is a rather LaVar Ball-esque argument to make (and CNN guest Ball certainly doesn’t follow his own advice), and Smith saying that anyone else shouldn’t comment on politics is hilarious considering that he’s been a Fox News guest on multiple occasions and has also appeared on CNN and MSNBC to talk politics. Oh, and on ESPN itself, Smith has consistently offered bad opinions on areas outside of the playing field, from saying women need to make sure they don’t provoke domestic violence to arguing about marijuana. But sure, Stephen, you fire off those takes and tell everyone else to stick to sports. At least this is better than whining about how hard your job is.

A source close to Herdman warned he’ll have one opportunity to earn the respect of a testosterone-filled dressing room that will be far less emotional and far more skeptical of his ability to transition.

Herdman won’t get the benefit of the doubt, the source added. There’s no Algarve or SheBelieves Cup to sort things out prior to major World Cup qualifiers that are “way more” pressure-packed than anything Herdman faced with Canada’s women’s team.

The source invoked San Pedro Sula, Honduras, the site of Canada’s infamous 8-1 loss, as being far different from playing at BC Place in front of thousands of screaming pre-teens, donning red face paint and Christine Sinclair jerseys. Simply put: The stakes are higher on the men’s side.

Herdman’s going to get the chance to prove exactly how good of a manager he is.

The margin for error in the men’s game is razor thin. World Cup qualification, something that has eluded the men’s team for three decades, isn’t automatic like it is for Canada’s women. The depth of field is exponentially bigger.

Matches aren’t won via athleticism and emotion as they are in the women’s game. Results are secured through tactics and technical ability on the men’s side.

As many critics, including players on the Canadian women’s team, noted, that’s some awfully dated and sexist language:

Let’s all check in on how the Toronto Sun is covering Herdman’s defection from #CanWNT to #CanMNT and try not to vomit at the sexism [h/t @DCU_Exile] https://t.co/Y8eAIseLMW pic.twitter.com/HXbIUbYsRu

Thanks for sharing David. I generally don't read articles about the WNT & Canada Soccer, but… wow, some fairly causal/dated sexism in this one. @TheTorontoSun, can we try to dig a little deeper for 2018? https://t.co/enQ3Q4sstk

I ain’t got no tactical knowledge in this lady brain I reckon https://t.co/r8RNblon9i

Chapman’s response there is the best. And Larson’s take deserves all the fire emojis. But seeing as we’re limited to five, we’ll give him that.