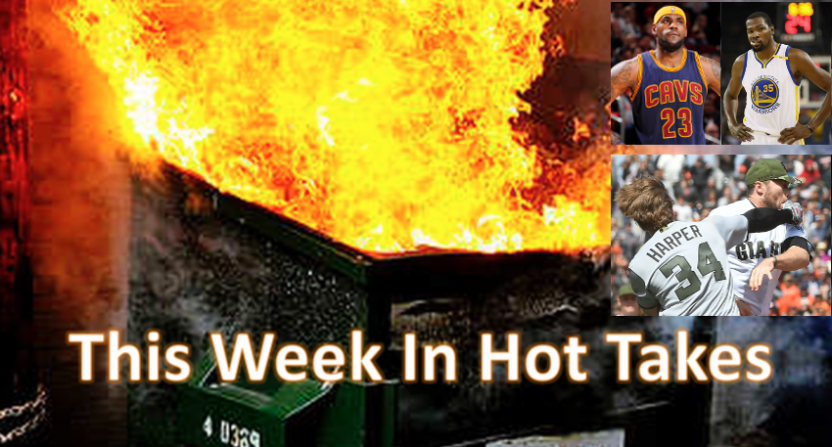 Welcome to another edition of This Week In Hot Takes! This time around, we’re looking at the hottest takes sports media members dropped from May 26-June 1. Let’s get to it.

5. Domonique Foxworth makes tortured argument about LeBron’s greatness: Foxworth filled in for Stephen A. Smith on First Take Tuesday, and he quickly started delivering Smith-level takes. See if you can follow the logic here:

“The only way LeBron is the best player … is if the Cavs can somehow pull out a win and I don’t see them doing that.” –@Foxworth24 pic.twitter.com/iGCuDMkoit

So, we’re judging individual greatness based on team accomplishments, and saying that LeBron’s greatness, “obvious” the rest of the time, is somehow less than Durant’s when the two are playing each other? Here’s the video, which doesn’t really clear it up:

He continues “And LeBron has a much more difficult task in front of him as far as defenders. So he has the burden of carrying the Cavs offensively, with some respite when he turns the ball over to Kyrie, but he has to be the distributor and the creator on offense, and then on defense, he’s probably going to have to guard Kevin Durant, unless they put J.R. Smith on him, and that’s going to wear him down. And the Warriors have defenders that, while no one can stop LeBron, can give him a little bit of trouble. They go through Draymond, KD, they’ve got Andre Iguodala, so there’s no break for LeBron, and I think it’s going to be very tough for him to do what he did last year, which is nothing short of magical. I don’t know that we can expect magic to happen two years in a row.”

Foxworth has a point that James will be facing tough defenders, but that doesn’t seem to say much about whether he is or isn’t great. If the argument was “who will put up better offensive stats?”, Foxworth’s case might make more sense. But from here, it looks pretty convoluted.

4. Skip Bayless can’t decide if it’s tough for LeBron to face the Warriors: Speaking of convoluted arguments, we have one from the master of hot LeBron takes, Bayless himself. Bayless started by saying that the Warriors “haven’t proven much in [the] postseason,” so they’re not that tough.

In his very next tweet, just five minutes later, Bayless talked about how there’s “very little pressure” on James because his team is such an underdog against those same Warriors, and how James is an “overprotected media darling”:

LeBron needs only 3 more assists for a triple double. Crucial for his blind-Witness apologists such as LeShannon Sharpe.

Just keep on keeping on with that LeBron hate, Skippy. But maybe try and make why you’re hating on him a bit more consistent?

3. C.J. Nitkowski ranted about “non-baseball people” over Strickland-Harper fight: Nitkowski, the former FS1 provocateur who left to be the Rangers’ TV analyst this offseason (while still doing some work for Fox here and there), has long been known for delightfully hot takes, such as telling those who complained about hazing rituals that “Baseball is not for you,” blasting statistics, and criticizing a woman who was texting during a game. His latest came after the Hunter Strickland – Bryce Harper fight, where he again went off on “non-baseball people,” a favorite hobbyhorse of his:

The “never played the game” argument was tired long ago, but Nitkowski’s still sticking to it. He later got into it with one of those smart non-baseball people, MLB Network’s Brian Kenny:

See? Even he understands and he thinks he knows everything. https://t.co/3mkHXhq79g

And bashed Kenny again the next day:

"Don't take this bait" CJ whispered to himself while also expressing gratitude that it will always be "if" to start these type of sentences. https://t.co/ufFU8wIK7E

Question for Nitkowski; is MLB commissioner Rob Manfred a “non-baseball type” despite working with and in the league for almost 30 years, because he didn’t play professionally? The real gratitude to express is that it isn’t Nitkowski running the game.

2. Terry Frei is “uncomfortable” with a Japanese driver winning the Indy 500 on Memorial Day: We’ve already covered this one pretty extensively, and Frei was deservedly fired for this stupid tweet, but it’s definitely still worth putting in a hot takes roundup. 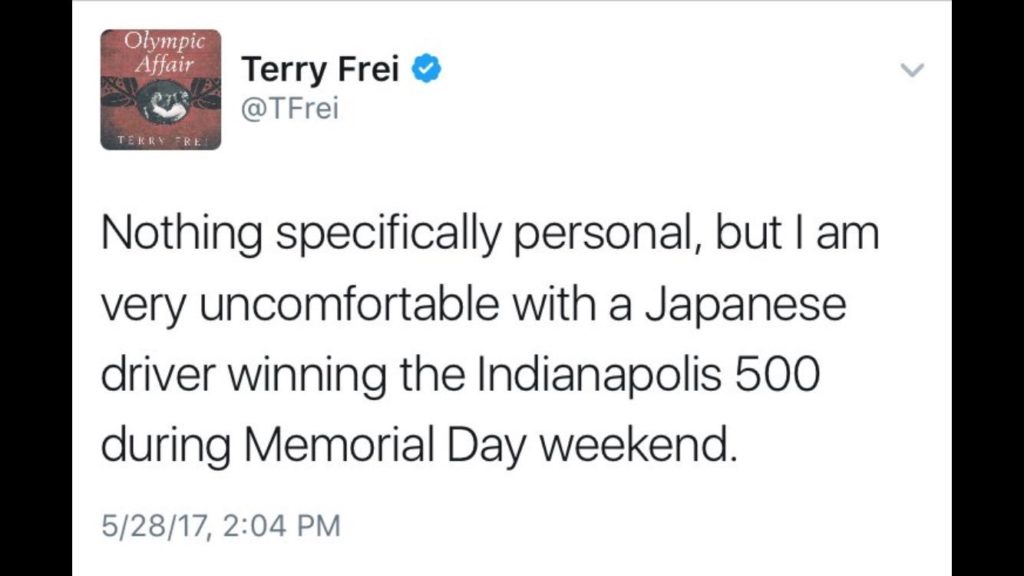 Yeah, that didn’t go over well at all. But nothing personal! Except that it’s extremely personal.

1. Bill Plaschke thinks it was “sickening” Strickland wore a camo hat when he hit Harper: Yes, we’ve managed to find a dumber take on the Strickland-Harper fight than Nitkowski’s, and it comes from veteran Los Angeles Times columnist Bill Plaschke.

That Strickland threw idiot pitch while wearing cap honoring those who fought for something real is sickening https://t.co/bK9JcNNGdE

Look, there can be plenty of criticism of Strickland’s actions, but this seems to be going way too far. “Sickening” because he, like the rest of the Giants’ players, happened to be wearing a camouflage hat? Tying a beanball into disrespect for the military is a bit much, and it’s our hottest take of the week.