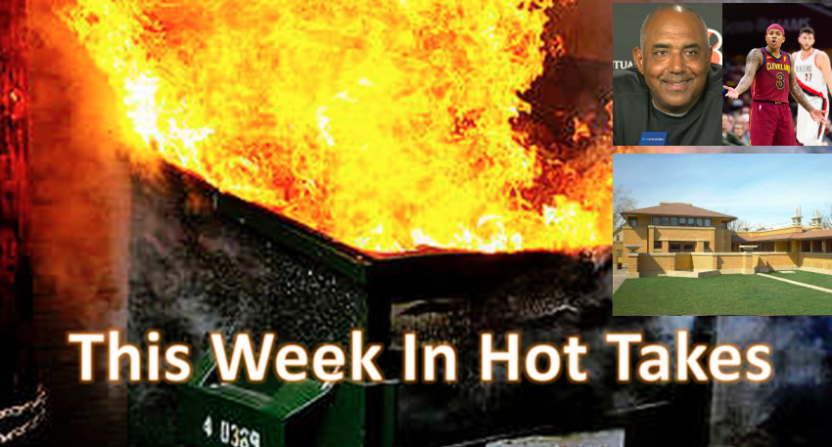 Welcome to another edition of This Week In Hot Takes, this time featuring the hottest sports media takes from Dec. 29-Jan.4.

5. Dan Dakich wonders if Andrew Luck likes football: Many of the worst takes out there center on if an athlete likes their sport enough, such as J.P. Ricciardi’s still-mocked 2008 take that Adam Dunn “doesn’t really like baseball that much.” Dakich, the ESPN college basketball analyst and Indianapolis radio host, decided to bring that take to football this week:

An athlete’s passion for a sport is something that can never really be proven from the outside, so of course media personalities decide to debate and question it. But they shouldn’t. And if Andrew Luck doesn’t like Indianapolis (quite the statement in its own right), bad media takes like this one might be part of the reason why.

4. Dan Wolken calls UCF “a punchline” for their parade:  The University of Central Florida Knights won every game they played this year, but were passed over for a shot at the FBS national championship thanks to the CFP committee. So they decided to claim their own national championship, complete with a parade, a banner and coaching bonuses, and it was a fun idea, one that fits with the long college football history of differently-claimed titles. Enter super-serious USA Today college football columnist Dan Wolken to pour water on the parade and bash UCF AD Danny White in the process:

This is how your program becomes a punchline. Danny needs to rethink this. https://t.co/Cp0bDjeCLT

The Cavs are now IT's team.

Yes, Thomas had a good start, scoring 17 points in 19 minutes off the bench. But saying the Cavs are “now his team” is insane. It’s also right on course for Bayless, though.

2. Stephen A. Smith goes in on Marvin Lewis again, says “Marvin Lewis and Cincinnati are taking black folks back”: For some reason, Smith seems to really have it in for Bengals’ coach Marvin Lewis. He’s complained extensively about Lewis over the years, calling for his firing in 2016, again this September, and saying in October that Lewis would already have been fired if he was white. With this week’s news that the Bengals are giving Lewis a two-year extension, Smith first reacted on Twitter:

Hold up! Hold the Hell up! Did I just hear this news correctly? Marvin Lewis has received a 2-YEAR Extension from the @Bengals? Really? Really?

And ESPN then brought in Smith to blast Lewis on its platforms, first on SportsCenter Tuesday night:

It’s always good when SportsCenter opts for incoherent yelling over news and highlights. “The fact is, Marvin Lewis deserves to be fired. …For the city of Cincinnati, this is a disgrace! …You can’t win Super Bowls, at least have the DECENCY to win a playoff game!”

Smith then followed that up with a rant on Lewis on First Take Wednesday, saying it’s a “damn shame” Lewis hasn’t been fired and that the Bengals’ organization “does not give a damn about its fan base.” And his rant gets really notable about 2:28, where he brings race into it:

“I’m going to say something that’s going to be very, very controversial, and I know it, but damn it, it’s on my heart, it’s in my soul! Marvin Lewis’ continued employment by Cincinnati…I’m not talking about a NFL coach at another franchise, I’m talking about for this franchise in this city where you’ve been for 15 years, Marvin Lewis is taking black folks back. I’m going to say it again, Marvin Lewis and Cincinnati are taking black folks back. You know why? Because when you allow him to remain gainfully employed as the head coach of the Cincinnati Bengals, who doesn’t have an excuse to do the same for their franchise?”

Even Chad Johnson thought this Smith rant was over the top:

Don’t appreciate Stephen A. Smith coming at Marvin Lewis this morning in such a vile manner….

1. Rod Watson is mad people are talking about the Bills instead of Frank Lloyd Wright: The most delightfully deluded local news column in some time comes from Watson in The Buffalo News this week. With many excited about the Bills’ first playoff appearance since 1999, Watson decided to…pour cold water on that, and argue that locals should be debating national news and celebrating Buffalo’s historic buildings instead?

Does the phrase “Get a life!” mean anything around here?

…We can’t possibly be so psychologically pathetic that having a football team make the playoffs for the first time in 18 seasons becomes the most important thing in town.

…In the meantime, what’s going on in the real world?

We have a president well on his way to becoming America’s first dictator, while he and “rocket man” threaten to blow up the planet. We have environmental and civil rights protections being shredded, agency heads neutering their agencies and a tax bill that expands the massive gap between the haves and have-nots.

We have Albany bracing for trials of former officials and contractors that will lay bare the buying and selling of state government.

And we have a school system that, despite glimmers of hope and change, still graduates too few and fails too many.

But is anybody rallying, partying or waving banners about any of that? No, it’s all Bills, all the time.

Buffalo needs help. At the inevitable watch parties, we should use halftime for mass therapy sessions to reaffirm what should be obvious: There are things more important than Tyrod Taylor’s quarterback rating. A city with Frank Lloyd Wright and Louis Sullivan masterpieces, Underground Railroad sites and a burgeoning medical campus should not have to fixate on LeSean McCoy’s all-purpose yardage.

Won’t someone please think of the Frank Lloyd Wright buildings? (Thanks to @OldTakesExposed for the submission here.)