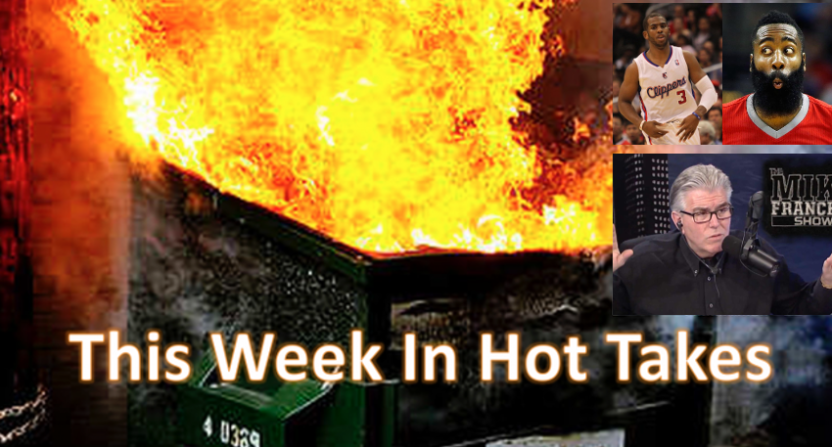 Welcome to another edition of This Week In Hot Takes. This time around, we’re looking at the hottest takes from sports media members from June 23-29. Let’s get to it!

Several of Wright’s points here aren’t wrong; there are reasons to question why the Celtics didn’t make a bigger offer for Jimmy Butler, or why they traded down in this year’s draft, or why they seemingly wanted Josh Jackson until he didn’t want them, and there are reasons to question what comes out of Celtics’ sources. But the cranked-up rhetoric and vehemence here makes it a hot take, especially when it comes to the rant Wright starts at about 4:20, in response to Kristine Leahy saying “Isn’t it possible they’re just waiting to see what happens with Gordon Hayward before they make any other big trades?”

4. Skip Bayless says James Harden will “become the NBA’s most frustrated player” after the Rockets acquired Chris Paul: Bayless is apparently on vacation this week (no new Undisputed), but he did find time to drop a hot Twitter take:

James Harden will soon become the NBA's most frustrated player and ultimately turn into the league's unhappiest. No longer his team.

Yes, because acquiring good teammates has worked out so poorly for, say, those players on the Warriors and the Cavaliers. Sure, there are questions about how Harden and Paul will work together in the backcourt and how they’ll share the ball, and maybe it won’t work out; some superteams don’t, as this 2012 Sports Illustrated Lakers cover will remind you. But presuming that Harden will be the “most frustrated” and “the league’s unhappiest” player just because it’s “no longer his team” seems a bit much. If Paul’s addition is enough to get the Rockets past the Spurs and Warriors (that may be unattainable, but their chances seem better with him than without him), Harden will probably be quite happy. Oh, and Bayless dropped a hot Paul take too:

So, Paul is simultaneously both good enough to make it “his team” over the MVP runner-up and bad enough to be “not a big difference-maker”? Huh.

3. Dan Dakich and Bill Plaschke go over the top on Chris Paul: Speaking of hot Paul takes, here are a couple further ones. First, from Bill Plaschke of the Los Angeles Times on Colin Cowherd’s The Herd:

.@BillPlaschke says Chris Paul is a "quitter" for leaving the Clippers pic.twitter.com/izWzFVt02X

“He’s a quitter. That’s all I can think of, Colin. He had the richest owner in basketball, he had the entertainment capital of the world, he was the leader of the team, he was a star in a star-driven town, he had Jerry West there, and he walked out on all of them.” Yes, players should never exercise free-market rights. In fact, Paul did the Clippers a favor on at least one level, opting in to a player option and letting them get some return for him instead of just going to free agency. But that hasn’t stopped the likes of Plaschke or Dakich from trashing him. Dakich went on ESPN’s The Ryen Russillo Show Monday and called Paul “a fraud” (11:08):

This starts with Russillo playing Dakich’s comments from Saturday, “To me, Chris Paul’s the guy, we call it in coaching ‘good enough to get you beat, good enough to get you fired. …Why don’t Chris Paul’s teams overachieve? They never do. They generally underachieve, and I point at him as being a fraud.” Dakich then defended the take further saying “I think he is…Chris Paul is the guy that looks like the leader, but nobody follows because they know he’s full of crap. He looks like the guy management and coaches can trust, but there’s no way in heck they can trust him once they get to know him for 10 minutes. …His teams never do well! There’s always bickering, there’s always complaining, there’s always whining, and he’s the leader!” This take’s pretty stupid, considering that many of Paul’s teams have done pretty well (just not as well as their opponents with better overall rosters), and that judging players by team success is incredibly flawed. Both Plaschke and Dakich dialed up the heat here, so both get this rating.

2. Andy Gray says “nobody wants to read anything over 1,000 words”: Right as MTV was laying off its longform writers, Sports Illustrated senior editor Andy Gray came in with a hot take:

I’ve been in digital media for 12 years. One thing I’ve learned is that nobody wants to read anything over 1,000 words. MTV is more proof.

Gray was promptly and deservedly roasted by colleagues and other media members. There’s maybe a debate to be had about what makes good longform, and if there are too many longform pieces that shouldn’t be long, but the stats posted in reply to Gray demonstrate plenty of people are willing to read long pieces (many of the most-trafficked pieces on the web are long) if they’re on an interesting subject, well-constructed and deserving of the length. Gray (who’s mostly known for running SI’s Hot Clicks and Swim Daily, so photos of scantily-clad women with or without accompanying sports links) could have said something less provocative about “short content works well on the web” or “not everything needs to be long,” and maybe started a more interesting conversation, but instead, he fired up the take-o-meter and offered a blanket “nobody” that isn’t true. And he also chose a pretty insensitive time to make that argument.

1. Phil Mushnick goes in on Mike Francesa’s “daily disregard for the truth”: New York Post columnist Phil Mushnick got in quite the war with WFAN host Mike Francesa this week, even prompting a rare response from Francesa (from vacation, no less!) discussing Mushnick’s “wild lies” and “nasty ramblings” after accusing him of a fight with station general manager Mark Chernoff, but it’s Mushnick’s response that really dialed up the heat. It’s even hotter than his column-opening take, which again criticized Yoenis Cespedes’ effort (on a play that probably couldn’t have been made, and might have risked extra bases for the batter, and on a called third strike). Here’s Mushnick’s response to Francesa’s response:

One therefore wonders why Chernoff, the boss, didn’t issue a denial. Or could it be that he knows WFAN staffers heard the expletives-filled scream-out which two claimed was impossible not to hear?

And it was specifically about ratings, Chernoff telling him the fall-off likely resulted from Francesa spending too much airtime discussing horse racing prior to Triple Crown races.

Besides, Francesa’s self-serving career-long, daily disregard for the truth is such that one needn’t waste time and imagination with fabrications.

And despite that call Francesa took from the Pentagon seeking his advice, and despite his sources in New Jersey law enforcement he claimed were assigned to investigate Lawrence Taylor’s arrest (Francesa thought Taylor had been busted in Jersey when it was New York) — just two of my favorite Francesa lies — I’ll risk the consequences of his powerful position and friends.

Mushnick and Francesa have been feuding for over a decade, but this latest back-and-forth is certainly bringing the heat, and the humor.

Honorable mentions: Stephen A. Smith for this gleeful rant about Phil Jackson’s departure, Pierre McGuire for saying “Analytics stink” because they wouldn’t have predicted that short and slow Mark Recchi would have done well in the NHL (uh, NHL analytics aren’t usually just about height or speed, Pierre, and many advanced stats probably would have projected Recchi better than those metrics).