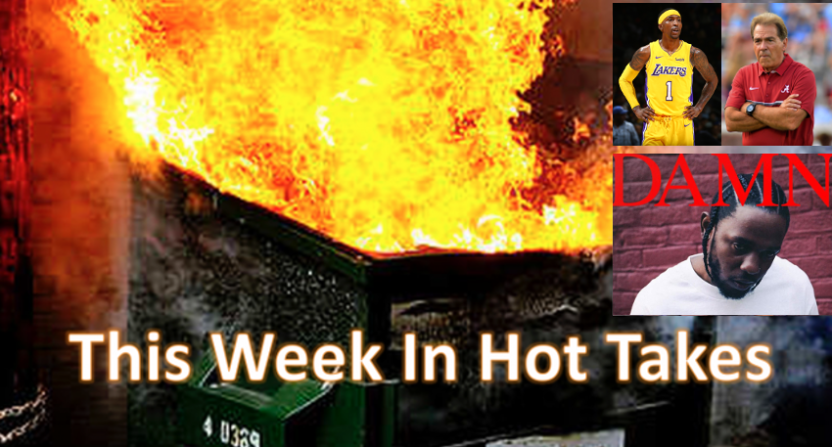 Welcome to another edition of This Week In Hot Takes. This time around, we’re looking at the hottest takes from Dec. 22-28.

5. Bruce Jenkins starts a WAR, then deletes a tweet: Every year, voting over the Baseball Hall of Fame produces debate about advanced statistics, and some predictably ridiculous takes from old columnists who hate them. The latest is Bruce Jenkins of The San Francisco Chronicle, who decided to not only discuss how he doesn’t look at wins above replacement (WAR), building on a tweet from fellow Chronicle writer Hank Schulman about challenges with the defensive component of WAR (especially as a historical comparison tool), but go on to argue that WAR is dumb because other baseball writers say so:

Exactly: Number of times I've checked WAR when filling out my ballot over the years: Zero. https://t.co/ZOyyTqDpwL

I've been big on stats since I was a little kid, but not WAR. Bill James calls it "not very impressive. They get so far into the data that they throw up their hands and take a wild guess." (cont.)

The particularly hot take is one he later deleted:

Not everyone has to use or endorse WAR, of course, but this is one of the lamest arguments against it in some time. Just because a few writers don’t like or appreciate a statistic doesn’t make it bad. If you really need to start the WAR war again (which no one really should need to), why not actually discuss the statistic and its perceived shortcomings instead of just quoting others who complain about it?

And the funny thing is, as many noted, numerous critics of advanced stats like Jenkins still talk about how “big on stats” they are. Even some who bash stats in general love to use stats like batting average, pitchers’ win-loss records and RBIs. Is there debate to be had over which stats are the most useful, and where certain stats shine and struggle? Maybe, although most of that debate’s been had so many times and the camps are so entrenched that it doesn’t feel worth it. But even if you do want more of a WAR discussion, this isn’t the way to do it.

4. Pat Leonard says Eli Apple gave “a disgusting no-comment by announcing, ‘I gotta take a s–t,’ in front of both male and female reporters”: As discussed earlier this week when we covered this, it’s remarkable that New York Daily News reporter/columnist Leonard managed to draw focus away from Apple’s suspension by the Giants (after reported on-field arguments with coaches and a refusal to play on the scout team) with something even dumber, first tweeting his moral outrage about Apple’s locker-room comments about bodily functions and then leading his piece on the suspension with a patronizing “not in front of women!” argument. Here’s the tweet:

Eli Apple has to be kidding. His first comment to media, including female reporters, minutes ago: “I gotta take a sh**!” Said it loudly. Smh #Giants https://t.co/mbU5ZgkVvh

And the lede of his piece:

The s–t has hit the fan.

The Giants swiftly suspended cornerback Eli Apple for the season’s final week on Wednesday afternoon, only two hours after Apple offered a disgusting no-comment by announcing, “I gotta take a s–t,” in front of both male and female reporters, and chuckling as he walked away.

Yeah, that’s the real problem. Not the poor on-field play, tweeting on the sidelines, arguments with coaches and teammates, and behavior that got Apple called a “cancer” by teammate Landon Collins. And how dare Apple say that “in front of both male and female reporters”? Women surely never use or hear obscenities. This patronizing junk from Leonard is a bad look for him and the paper.

3. Stephen A. Smith goes off on Kentavious Caldwell-Pope, saying “I have a problem with the fact that you’re being let out of jail to go participate in basketball games,” then apologizes: The situation with Lakers’ guard Kentavious Caldwell-Pope is certainly an unusual one. Caldwell-Pope is serving a 25-day jail sentence for a probation violation, but doing so at the Seal Beach Police Department Detention Center and participating in a work-release program that allows him to play in Lakers’ home games (but not on the road). The sentence stems from a plea deal Caldwell-Pope struck after he was arrested on a operating while intoxicated charge in Auburn Hills in March (while playing for the Detroit Pistons), a charge that was later dropped when Caldwell-Pope pled guilty to the lesser charges of allowing a person to drive under the influence  and careless driving. The NBA suspended him for two games at the start of this season.

Caldwell-Pope was placed on a year’s probation by the Michigan court, and received the jail sentence for not abiding by some conditions there, including making himself available for drug and alcohol testing. Those kinds of testing violations are complicated, especially when it comes to those who move out of state and don’t necessarily receive the notifications they need, as we’ve seen with some athletes like the NFL’s Brandon Browner. Probation violations and their enforcement are also complicated, as we’ve seen with criticism of the Meek Mill case. So charging in without subtlety or nuance to unilaterally say that Caldwell-Pope shouldn’t be able to play while he’s in this work-release program seems like a bad idea, but that’s what ESPN’s Stephen A. Smith did last Friday:

“I have a problem with the fact that you’re being let out of jail to go participate in basketball games. The hell with it, serve your 25 days. …You shouldn’t be allowed to leave and go to work, play in front of 18,000, 19,000 people.” Except that that’s how a work-release program works. The amazing part is that Smith actually admitted he was wrong afterwards:

I need to address the @CaldwellPope situation the next time I’m on TV — tomorrow or XMas-Day. I was given the wrong impression about his legal situation before I went on the air. That’s not fair to this kid, so I will correct the record. See y’all soon.

Good for him for walking it back a bit at least, but this was still a fiery take.

2. Skip Bayless says “getting torched in big games” is Alabama’s identity under Nick Saban: Speaking of fiery takes, Smith’s former First Take counterpart Bayless continues to drop those on FS1’s Undisputed. This week, he took a rare dive into college football, and perhaps showed why he doesn’t talk about college football much:

Nick Saban says Alabama “lost its identity” at Auburn? Getting torched in big games has BEEN Alabama’s identity. Now on @undisputed

Yeah, getting torched in big games is absolutely the identity of the most dominant team in college football over the last decade, one that’s won four national titles and five SEC championships under Saban. Right.

1. Phil Mushnick complains that “ESPN embraces racial slur rapper” Kendrick Lamar: Mushnick’s cranky old man act has often seen him grumble about rappers and their language, from a 2012 column suggesting that “As long as the Nets are allowing Jay-Z to call their marketing shots…why not have him apply the full Jay-Z treatment? Why the Brooklyn Nets when they can be the New York N——s?” to a piece this October blasting Jemele Hill because she has “indulged ESPN’s frequent “special guest” appearances of unspeakably and unprintably vulgar rappers who promote and cash in big on every heart-breaking, blood-spilling backwards stereotype of black America — especially rappers who have helped resuscitate the N-word while boasting of their sexual degradation of women as hit-the-road whores, bitches and worse.”

This time around, Mushnick’s mad at Hill in particular and ESPN in general this week over the announcement that Kendrick Lamar will perform at halftime of the college football national championship game, writing an amazing column titled “ESPN embraces racial slur rapper for halftime show” that starts with six paragraphs about a Adam Henig book that discusses the use of the n-word by white fans against black baseball players during the 1950s and 1960s (totally equivalent to a black rapper using it, obviously), doesn’t mention Hill until the eighth paragraph, and doesn’t mention Lamar until the 10th paragraph. Here are the lowlights from where Mushnick finally starts talking about Hill and Lamar:

Tuesday, Hill was excited for a different reason: ESPN had selected the halftime entertainment for the its broadcast of the national championship football game.

Given Hill’s race-based activism, one logically wonders why she’d so openly favor Lamar, a rapper who has grown fabulously wealthy through lyrics that consistently refer to black men as “N—-s”.

I’d be glad to provide Hill examples of his lyrical artistry so she can recite them on ESPN. She could start with “Money Trees.’’

That could never happen because ESPN would never allow such a thing, thus she’s spared from exposing her rank hypocrisy.

Or perhaps she can identify the proper context in which African-Americans should be called “N—-s,” and those logical instances when the vulgar degradation of women should be recorded, sold, performed, applauded.

Does Hill know that 12-year-old black kids now effortlessly, reflexively call one another “n—-s”? She’s good with that?

Odd, but not surprising, how it works. ESPN, a sports network, decries racism and sexism from within and beyond, yet eagerly seizes the cross-promotional (perceived) value in embracing such rappers. Still, not one ESPN exec would dare publicly repeat their lyrics.

Three cheers for Phil Mushnick, the false equivalency champion of the world and the worst rap critic on the planet.

Honorable mention: Bud Dupree says James Harrison “spit in Coach Tomlin and Mr. Rooney’s face” by joining the Patriots after the Steelers cut him: Normally, this kind of fiery take from a host on a local radio show would make this column, but it should be noted that Dupree plays for the Steelers. So it’s not quite as remarkable when you consider he’s the one saying it. Still fiery, though.