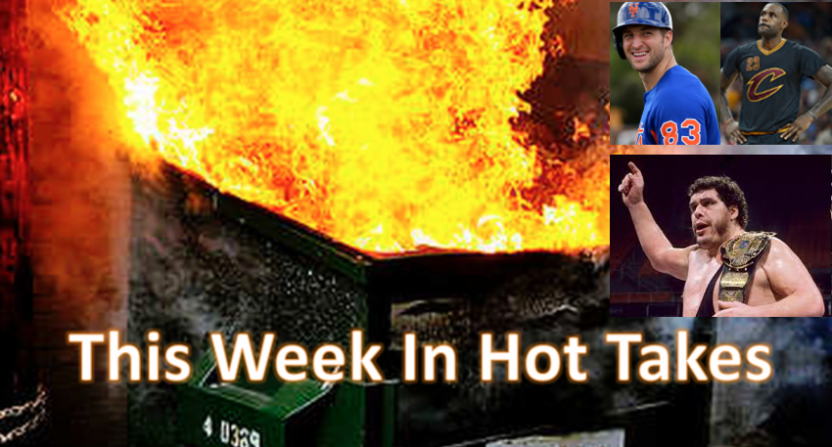 Welcome to another edition of This Week In Hot Takes! This time around, we’re examining the hottest sports media takes from March 30-April 5.

5. Barrett Sallee says Tim Tebow criticism “is so silly,” “no player has been so unnecessarily criticized in our generation”: 30-year-old Mets’ part-time non-prospect and sometime ESPN college football analyst Tim Tebow has done a great job of failing upward through the minors, getting promoted from low-A to high-A last year despite a .222 batting average and starting this season at double-A despite a 1-for-18 (with 11 strikeouts!) line in Grapefruit League play. He did hit a homer in his first pitch at AA (something he also did in his first low-A at-bat last year before going on to a forgettable season), which prompted some discussion and some reminders that he is actually far worse than your average minor-leaguer and yet promoted despite that (couldn’t have anything to do with the marketing opportunities, could it?). But according to CBS college football analyst Barrett Sallee, that criticism is “so silly,” and “no player has been so unnecessarily criticized in our generation”:

Tim Tebow criticism is so silly. Dude can play, but is still working on his game. It’s almost like he stopped playing baseball for a decade

No player has been so unnecessarily criticized in our generation. Tebow is an incredible athlete and, more importantly, an incredible human

First, Tebow’s status as a human, good or bad, has zero to do with discussion of his on-field abilities. And “still working on his game” might have some merit, but remember that Tebow’s going to be 31 this year; that window to actually becoming a decent minor leaguer is fast closing, if it was ever open. (It may not have been.) Tebow’s “baseball career” is a giant promotional stunt, one that sees him regularly promoted over much more deserving players, and pointing that out is far from unnecessary criticism.

4. Skip Bayless brings further players into the LeBron/Jordan debate, simultaneously argues that LeBron isn’t the best player in today’s NBA and has a “superhighway” to a ring: FS1’s Bayless has largely made a career out of ranting about LeBron James and insisting that he’ll never reach Michael Jordan’s level, but he took it to some interesting places this week. We’ve usually seen just a never-ending debate about who’s the best of all time between LeBron and Jordan (a difficult question to definitively answer given the different eras, positions, cases for each and so on, which is why this debate keeps going), but Bayless threw in some wrinkles this week, first suggesting that he’d take Tim Duncan over LeBron:

There’s a reason no one else is making that comparison. Duncan was a great player, one of the best of his era, and seems sure to be a Hall of Famer, but his career averages (19 points, 10.8 rebounds, 3.0 assists per game) are nowhere near LeBron’s (27.2/7.4/7.2), and neither are his awards (two-time MVP to four-time MVP). And judging an individual player by the Finals record of the teams he played for is a terrible idea (and shouldn’t it be noted that the one loss there for Duncan came against LeBron?). But this is a way for Bayless to further muddy the waters of the LeBron/Jordan debate, suggesting that it’s so clear LeBron isn’t in Jordan’s league that he should be compared to other players instead. And he did some more of that this week, and showed off some inconsistencies too. Here’s his take on Kevin Durant as “the best player on the planet”:

"Kevin Durant goes 34 and 10, and he is once again showing you he's the best player on this planet… If the Warriors don't have Steph for the whole playoffs, I still like them to win." — @RealSkipBayless pic.twitter.com/X6UUMV1mqz

But Skippy, you said LeBron has a “superhighway” to a ring thanks to injuries?

Steph Curry could be out with an MCL sprain for 3 weeks, then what? Kyrie had knee surgery that could keep him out for another month and a half. LeBron's New Cavs are getting fully healthy. The basketball gods are smiling on the King. NOW TAKE ADVANTAGE, LEBRON.

So, LeBron has a “superhighway” to a ring. But he’s not the best player on the planet. That would be Durant. Or maybe James Harden?

"LeBron will never pass Michael Jeffrey Jordan in the big picture, and he will not pass James Harden for this year's MVP in the smaller picture. It's over, and it's been over." — @RealSkipBayless pic.twitter.com/d0z7OmNugB

"Come playoff time, game on the line, stakes at their highest, I'd take Russell Westbrook over James Harden any day or any night… James Harden is like Peyton Manning — built for the regular season not for the post." —@RealSkipBayless pic.twitter.com/iaZ9CmzSGQ

Of course, Harden might have a better MVP case than LeBron this season, and that’s perfectly fair to discuss. But what’s absurd is how Bayless’ statements stack up over time; he’s simultaneously trying to argue that it’s easy for LeBron because other players are hurt, so a championship for him means nothing, and yet that other healthy players are better than LeBron. And all this winds up doing is confusing the issue.

3. Ice Cube suggests Kobe was better than LeBron: Speaking of  muddying the waters, one of Bayless’ Undisputed guests did a nice job of that this week, with Ice Cube throwing out not just that LeBron is inferior to Jordan, but that he’s not at Kobe Bryant’s level:

"LeBron is a basketball player, but Michael Jordan is a superhero — and it's just hard to beat 0 losses in the Finals… so LeBron will never surpass Jordan." — @icecube pic.twitter.com/RD2BZnyD8r

LeBron needs to pass Kobe before he can even think about MJ. pic.twitter.com/jx90wkVuDq

For a man who goes by Ice Cube, these are both pretty hot takes. The Finals record thing is one of the stupidest debating points out there (which is why Bayless keeps bringing it up); it’s somehow better to lose in an earlier round of the playoffs than to lose in the Finals? And bringing Kobe into this conversation is something rarely seen outside of diehard Lakers’ fans (which Cube is, so fair enough, but that’s hardly a rational take). Kobe averaged 25.0 points, 5.2 rebounds and 4.7 assists for his career, less than LeBron in all three categories, and was far less efficient (he shot 44.7 percent from the field versus LeBron’s 50.4). There’s a reason we haven’t seen a “Kobe or LeBron” debate outside of this take, and it was not a good day for Cube’s basketball opinions.

2. Stephen A. Smith rants about analytics, the Raptors, and shouts “period” a lot: ESPN’s First Take is often known for its incoherent shouting, and boy, did Smith deliver on that front this week, coming out with this rant about analytics (including ESPN’s own analytics department!) and the Toronto Raptors, and yelling “Period!” six times for some reason like that would enhance his point:

As the wise Michael Palin once said: 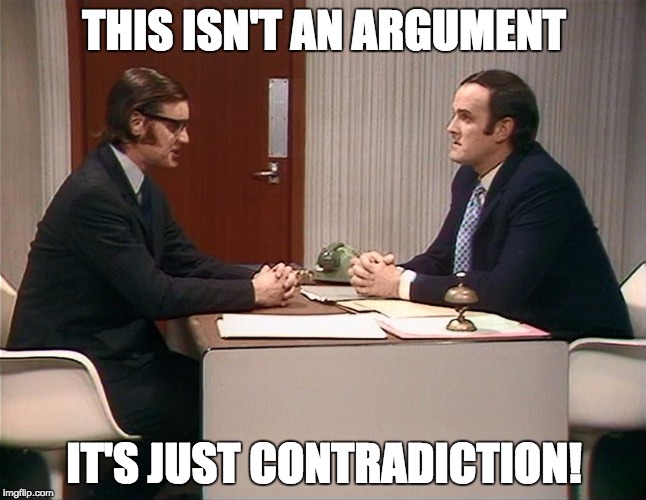 1. Phil Mushnick is mad…about the Andre the Giant documentary? New York Post resident curmudgeon Mushnick is a regular in these pages, and he has a slew of regularly bad takes on certain subjects, such as games that end after his bedtime, foreign NCAA players, touchdown celebrations and more. But it’s always the most fun when out of nowhere, Mushnick drops a hot take you wouldn’t necessarily see coming. He did just that this week, using a footnote in a long column ranting about late start times (“MLB made its choice to chase money over serving young fans“; won’t someone please think of the children, but not the ones watching at home on TV!) to go after HBO’s upcoming Andre the Giant documentary for some reason:

That HBO teamed with the WWE to produce a documentary about Andre the Giant tells us that even the ugly stuff will be heard and seen after it has been vetted and sanitized by Vince McMahon’s office. It’s a pity HBO would team with the WWE for anything.

What in the world is Mushnick even talking about here? First off, he presumably hasn’t seen the documentary yet (it debuts April 10; some advance reviews have been done, but if Mushnick did watch an advance copy, you think he’d have more to say than just these two sentences), so he seems to be objecting just to its existence, but that’s been out there for years. How does he know it will include “ugly stuff,” and what’s that even supposed to mean?

And he’s simultaneously complaining that it will have “ugly stuff” and that the WWE’s involvement will “sanitize” it? And objecting to the HBO/WWE partnership in general, for unclear reasons? It’s impressive that Mushnick’s managed to be even more incomprehensible and deluded than usual and crank up a five-alarm hot take in just two sentences. Very efficient.