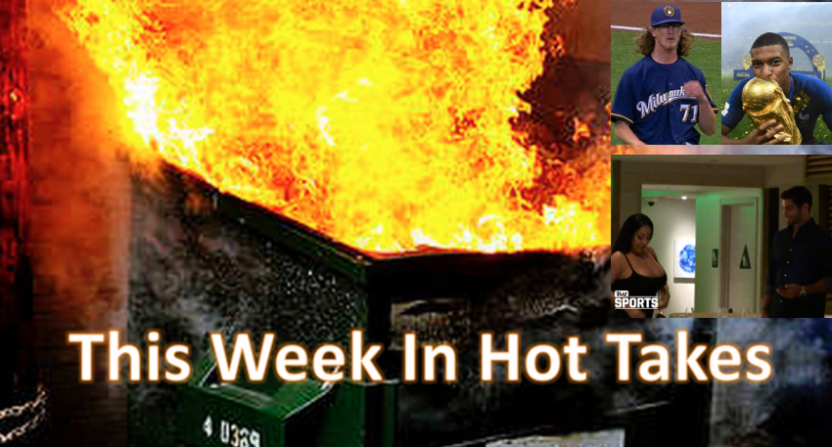 Welcome to a special Monday edition of This Week In Hot Takes, this time covering the hottest takes from July 13-22. (We apologize for the delay from the usual Friday slot, which we’ll be returning to this week.)

5. Stephen A. Smith says Kawhi Leonard was “exiled to another country”: ESPN pundit Smith hasn’t often been a big fan of players asking for trades or even making particular free agency decisions (see his years-long complaints about Kevin Durant), and he showed that off again last week. Following the news of San Antonio Spurs’ star Kawhi Leonard being traded to the Toronto Raptors, Smith jumped in to say this was about Leonard’s arrogance and it was an “exile to another country” for him:

This is what happens, KAWHI! pic.twitter.com/hyMqwjBpYF

Yes, that’s technically true; Canada is another country. But it’s only an exile in the sense that any trade not of a player’s making is, and “evidently not big enough” is pretty ridiculous; there aren’t many players who are able to get themselves traded exactly where they want to go and when. That’s why free agency is important.

And suggesting that Leonard’s injury-limited season (which was at the center of the conflict between him and the Spurs) is what kept him from going to the Lakers doesn’t feel right either, and neither does saying he acted like he played 82 games. Leonard is aware of his value, as is everyone else, and while his injuries raise some questions, they don’t mean he should suddenly have to be meek.

Also, this may not be as much of an awful thing for Leonard as Smith claims; he got out of what looked to be turning into a toxic situation in San Antonio, he wound up on a Raptors’ team that’s an Eastern Conference favorite, and he can now choose either to stay with them long-term or head wherever he wants next summer. But sure, “this is what happens.”

4. John Middlekauff wonders “what kinda loser do you have to be” to look up Josh Hader’s old tweets: Middlekauff, the former NFL scout turned The Athletic San Francisco personality, has become a regular presence in this column recently, and he’s back again thanks to takes on the unearthing of Brewers’ pitcher Josh Hader’s old racist and homophobic tweets. First, in a since-deleted tweet, he wondered “what kinda loser to you have to be also to go back to 2011 and look for tweets? #ABigOne.” That was screencapped by Robert O’Neill, next to one of Middlekauff’s old tweets on the Cubs signing Jon Lester:

I couldn't help myself. pic.twitter.com/curzwj1n57

There are also plenty of Middlekauff tweets on the Hader situation that weren’t deleted, saying it’s not a big deal because he was 17 and calling Twitter an “echo chamber of hate” for people pointing out these old racist and homophobic tweets:

To me everyone calling him racist is classic twitter. Do his teammates think he is? Has he ever had an issue in all his years as a professional? Who cares what twitter thinks. What do his peers think? Classic echo chamber of hate on here https://t.co/UvubAEKeoV

I dunno man. I don’t take twitter very seriously so your asking the wrong guy. Should he have tweeted (of course not) – should this define him. Foh. He was 17. Is he a racist homophobe? I dunno, neither does anyone on here that’s for damn sure https://t.co/Nbw4xCUQL0

The hate on this place is mind blowing https://t.co/v8RmXw4duW

Look, yes, of course tweets from seven years ago aren’t necessarily fully indicative of a person today. But that doesn’t mean that digging up racist and homophobic tweets a professional athlete sent and did not delete is for “losers,” or that it’s acceptable to send racist tweets when you’re 17, or that pointing out that a player did this is part of the “echo chamber of hate.” And it’s notable that this only led to sensitivity training for Hader, not a suspension or the loss of his job (unlike Guardians of the Galaxy director James Gunn, who was fired after right-wing critics unearthed old tweets that saw Gunn making offensive jokes about pedophilia and rape). Middlekauff’s “he was 17” needs some work as a defense, and his calling Twitter users who dug up Hader’s tweets “losers” is the real hot take here.

3. John Feinstein argues that an All-Star Game he “didn’t watch a minute of” didn’t matter, batting practice was better than the Home Run Derby: It’s always fun to see takes from people who proudly insist that they didn’t watch the thing they’re dropping takes on. We got that recently with Andy Benoit’s thoughts on college football, which appeared in last week’s hot take roundup, and now we have author and CBS Sports Radio contributor John Feinstein penning a long screed about how the All-Star Game used to be better back in his day (despite the National League almost always winning) and how it “doesn’t matter anymore” (despite him not watching it to know what happened). Most of the column is just him rattling off past All-Star Game stats and memories, but there are some spicy takes in it, including that “nobody cares anymore” and that players taking batting practice in the old days was better than the Home Run Derby:

I covered the All-Star game for The Washington Post in San Francisco in 1984 and remember batting practice on Monday afternoon when one slugger after another took turns crushing balls into the stands. There was nothing formal about it, no hyped ‘Home Run Derby,’ just a bunch of great players putting on a show for thrilled fans—who paid nothing to get into the ballpark that day.

…The American League’s 8-6 victory on Tuesday meant it has now won 18 of the last 22 All-Star games. Here’s the thing: nobody cares anymore—including the players. I’m not exactly certain when the game stopped mattering at all, but it’s been a while now.

…On Monday, when Bryce Harper—who I’ve always liked—won the Home Run Derby, people acted as if the Nats had finally made the World Series. I wrote a CBS Sports Minute making fun of all the hysteria and the fact that many in the D.C.media—frightened that Harper will leave this fall as a free agent—are already trying to say Harper leaving isn’t that big a deal.

It IS a big deal. Winning the Home Run Derby is not. Naturally, the local media talking heads pilloried me for daring to make fun of them. I suppose they’re entitled.

All that said, I didn’t watch a minute of the All-Star game. I couldn’t care less anymore. Give me the Cardinals and Cubs tonight and the season (finally) re-starting in earnest on Friday.

Look, no one needs to like or watch the All-Star Game if they don’t want to, but Feinstein’s argument here is just a whole bunch of nostalgia, including some that’s not especially measurable (such as how much players “cared”). And it should be noted that the old All-Star Games had their problems, too; one person’s “they cared!” is another’s “Ray Fosse’s still in pain almost 50 years after Pete Rose took him out in an exhibition game.” But this whole piece was just a chance for Feinstein to point out how long he’s been around baseball, and to use exaggerated “Back in my day” arguments. (He’d fit right in with the Four Yorkshiremen.) And it’s particularly great that he’s trashing something he didn’t even watch.

Says the dude with a “take” from a typewriter….maybe if you upgrade to a palm pilot we can chat until then carry on. ?? https://t.co/2e2VrEL00E

“We will win everything” is a ludicrous take given the world levels of talent in soccer, and given that athletic skill doesn’t always translate from sport to sport and isn’t the sole predictor of success. But that didn’t dissuade Gottlieb from reveling in his ignorance, though. And he did just that on his radio show, spending almost five minutes talking about how little soccer he watches (but how much he knows about it despite that) and how he wants soccer fans to “go away” until the next World Cup:

With the #WorldCup wrapped up, @GottliebShow feels it's about time for 'Soccer Guy' to say, "Good-Bye." pic.twitter.com/LQpuTjZNpH

This is just ridiculous trolling with no basis in reality, but that’s par for the course from Gottlieb.

“Values and class,” eh? We can’t all have the values and class of Britt McHenry, known for such takes as “If you don’t want to be treated like a sex object, perhaps don’t be one” on the Redskins’ cheerleader scandal and claims that Craig Sager Jr.’s “only connection to media is his famous dad.” And McHenry is known for just being a perfect model of values, from “I’m on television and you’re in a f—ing trailer, honey.  Lose some weight” through cringey fights with people on Twitter. But sure, Garoppolo going on a date with an adult film actress is the real problem here.