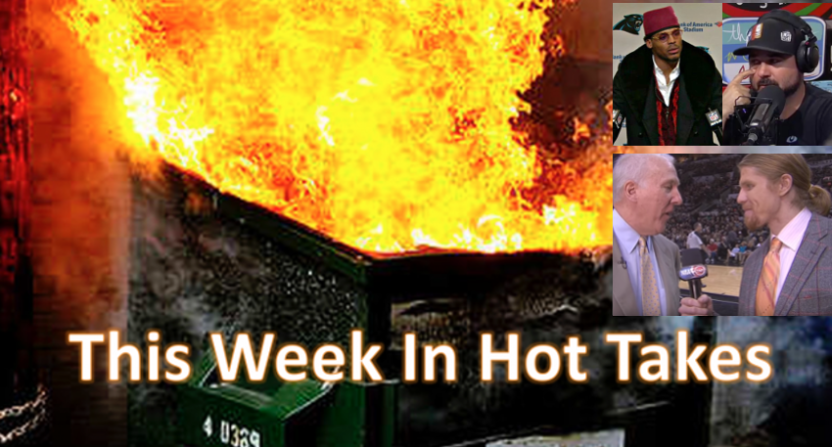 Welcome to another edition of This Week In Hot Takes. This time around, we’re looking at the hottest takes from Dec. 15-21.

5. Skip Bayless predicts the Cowboys will get to the Super Bowl: It’s an awfully bold prediction to suggest that a 8-6 team currently on the outside of the playoff picture is going to make the Super Bowl, but that’s what Bayless offered Thursday on Undisputed about his beloved Dallas Cowboys. He wasn’t even fully confident they’d get in the playoffs, but said if they do, they’ll make the Super Bowl:

"If by chance my Cowboys slip in the back door of the playoffs, they will in the NFC and get to the Super Bowl… they will be the most dangerous team in the playoffs." — @RealSkipBayless pic.twitter.com/TF1B9uNpCh

That’s quite the take.

Of course, Smith shouldn’t blindly side with Le Batard just because they’re ESPN colleagues, but it is curious that Smith is choosing to side with a league executive rather than a journalist questioning him. Especially when, as Barry Jackson of The Miami Herald pointed out, the commissioner’s denials of his knowledge of the Marlins’ plan to slash payroll have been refuted by sources. So Le Batard’s interrogation of him on that point and refusal to accept his pat answers feels pretty justified. Oh, and Smith calling them the “Florida Marlins” loses some further points.

3. Phil Mushnick on foreign NCAA players: Mushnick has long railed against foreign players in the NCAA, and he did so again this week. What’s the complaint this time? Well, he’s arguing that they can’t be invested in rivalries thanks to not growing up with them:

It takes a village to make an idiot.

From the start of the Big Ten Network’s telecast of Saturday’s Seton Hall-Rutgers, we were told that this one is special, an intense in-state rivalry.

That’s right, ingrained with Garden State Parkway awareness, Seton Hall players recruited from Nigeria, Indianapolis, Georgia — the country, not the state — Wisconsin, the Dominican Republic and Jamaica — the country, not Queens — were prepared to give it all up to beat Rutgers on behalf of their New Jersey pride.

On the other side, Rutgers players, recruited from New Hampshire, Portugal, Holland, Florida, Ontario, California, Massachusetts, Maryland, Senegal, North Carolina and France, were not going to surrender New Jersey to Seton Hall without a fight.

So, despite the likelihood that neither team’s players know Trenton from Totowa, stick around for the Hatfields vs. the McCoys!

Oh, and he went on to argue that one player made too fancy of a dunk instead of a layup:

Late in the first half, play-by-play man Kevin Kugler became overjoyed to witness the stupid.

After a steal, Seton Hall’s Myles Cale, likely having grown up with ESPN, was on an all-alone break. Although he could’ve laid the ball in or executed a low-risk jam, he spun around and performed a backwards, over his back and head slam.

Of course, had Cale missed it, Kugler would’ve had to scold him for doing his team needlessly fancy dirt.

2. Shannon Sharpe brings up house slaves when talking about Cam Newton: The hottest Undisputed take this week may have come from Bayless’ co-host, as Sharpe decided to go to some strange places with an analogy when discussing Carolina Panthers’ quarterback Cam Newton’s defense of owner Jerry Richardson:

I think you are trying to hard to be mr “for the culture” @ShannonSharpe smh pic.twitter.com/mDPvK2Rl8W

Sharpe started talking about how Richardson didn’t defend Newton when Newton lost endorsements over sexist comments, and went on from there:

“Did Mr. Richardson not hear about this? Why didn’t he come to his defense? Skip, this goes back way back when. Because Cam, he’s a first-round pick making a lot of money. Back in the day, the house and the field were treated differently. The blacks that worked in the house, when the white man, the master, got sick, we sick. We sick! He sick! But he couldn’t see that! Cam looking at it like… I get it. Harriet Tubman, someone said, “Ms. Tubman, you freed a lot of slaves,’ she said ‘I’d have freed a lot more had they known they were slaves.’”

“But see, the mentality that Cam has. Cam, speak for you, speak for your relationship with him. But to discredit these victims, because we know three because there were settlements…now, moving forward, this is what I want you to think about, Cam. This story, a little bit of this story, started surfacing Friday. Sunday night, the man that’s owned this team for over 20 years is going to put it up at the end of the year over allegations. Won’t you think about that? Over allegations, a man is going to sell something that’s his pride.”

“That’s why we know about Mr. Richardson. A lot of people that follow football know that he played for the Colts, that he’s old-school, that he took the money he made as a football player, invested it and became very wealthy. Skip, over allegations that surfaced Friday, he put the team up less than 48 hours later. Over allegations! Most people, when you say allegations, I’m going to fight it.”

Criticizing Newton’s defense of Richardson is one thing, but bringing up slavery here is quite the take.

1. Britt McHenry says Craig Sager Jr.’s “only connection to media is his famous dad”: Since leaving ESPN, McHenry has fired off all manner of hot takes, but she started a particularly interesting Twitter war recently by going after Craig Sager Jr. (Technically, McHenry’s initial remarks here came last Wednesday, but they were brought to wide attention thanks to a response from Craig Jr.’s sister Kacy Friday.) McHenry has since deleted her tweet, but her remark that Craig Jr. is the “same kid whose only connection to media is his famous dad” seemed particularly harsh given the multitude of work he’s done, and especially so coming around the anniversary of his father’s death. And Kacy Sager’s response seemed pretty justified:

Even Fox News called McHenry “the ESPN has-been” in their coverage of this. Which seems pretty apt at this point.