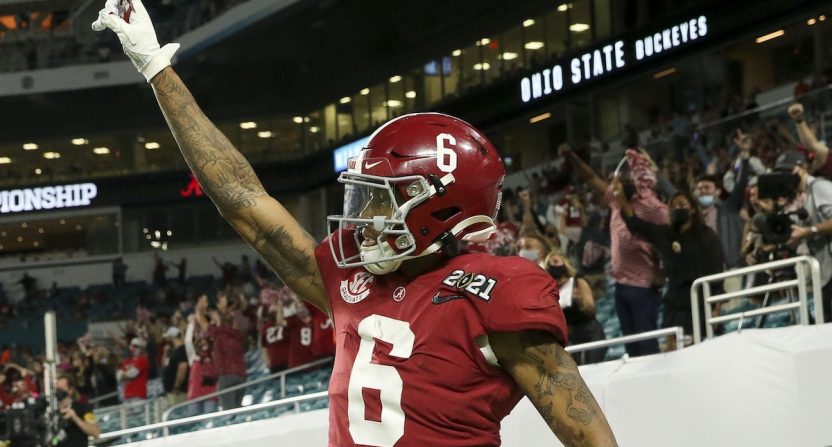 Here at Awful Announcing, we often enjoy sharing the local network calls from big sporting events to get that hometown perspective and perhaps underline just how special highlight moments can be for fans and the broadcasters who cover these teams.

Sure, we already know that it’s a big deal when Stephen F. Austin upsets Duke at Cameron Indoor Stadium. But getting the local radio call of the closing seconds from broadcaster Rob Meyers adds a splash of color and impact to the proceedings. The same was true when the Kansas City Chiefs broke their 50-year Super Bowl championship drought last year and longtime radio voice Mitch Holthus called the action.

Alabama’s 52-24 victory over Ohio State in Monday night’s College Football Playoff National Championship Game didn’t carry the drama of an upset win or the novelty of a long-awaited title or first-time championship. We’ve certainly seen the Crimson Tide finish the season as champions in seven of the past 11 years. And the matchup against the Buckeyes lost all of its drama by halftime.

“Mac finds DeVonta behind the defense… he is in for a touchdown!” called Gold. “Thank you, Mr. Heisman! Thank you, Mr. O’Brien and Unitas Award winner! What a combination! 44 yards… touchdown, Alabama!”

Alabama quarterback Mac Jones won the Davey O’Brien and Johnny Unitas Awards that go to the nation’s best quarterback. (The Unitas Award goes to an upperclassman.) Jones was also a finalist for the Heisman with Smith.

Smith put up his great numbers despite missing most of the second half with a dislocated finger on his right hand. (Smith almost certainly would’ve broken the record for most receiving yards in a national championship game, set last year by LSU’s Ja’Marr Chase with 221.)

Gold had plenty of highlight moments to call on Monday night. Here’s a compilation of them, courtesy of Learfield IMG College:

LISTEN to Eli Gold's "Best of the Best" ?? calls from the win‼️#RollTide pic.twitter.com/T1Jt7RHPlJ

For Gold, calling Alabama’s sixth national championship victory was surely special as well. The veteran broadcaster’s streak of 409 consecutive Crimson Tide games came to an end earlier this season when he had to miss the team’s Dec. 11 game versus Arkansas after testing positive for COVID-19. Gold began broadcasting Alabama games for radio in 1988.