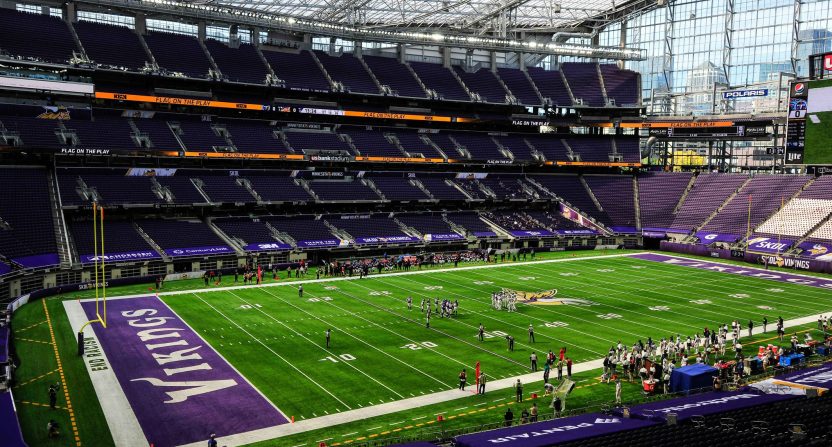 “Embrace the suck.” Cleveland Browns head coach Kevin Stefanski used this phrase earlier this season, summing up this year quite accurately while talking to his players during the topsy turvy 2020 NFL season in the midst of a global pandemic.

As we’ve all tried to navigate this new “suck” of trying to cope and adapt, from finances to mental health to social angst, it’s forced us all to realize the very simple things we’ve taken for granted. It’s also forced businesses to make rash decisions and detrimental ones, stepping out of the box to create new revenue streams to stay afloat.

It’s no small feat; ratings are down across all leagues, both professional and collegiate. In-person gameday fan attendance is down to nothing or nearly nothing, killing the gate revenue for teams. Television carriage agreements could be in jeopardy, along with advertising campaigns and sponsorships. Millions, if not billions, of dollars have been lost. So what’s next? The creative revolution has begun.

Sinclair has made it known in the past they would possibly agree to a sportsbook partnership. What better time than now? Their new agreement was announced last week, a 10-year deal giving Sinclair entry to the world of sports gambling. Under the agreement, the 21 Fox regional sports networks Sinclair acquired last year will be rebranded with the Bally’s name (excluding YES in New York and Marquee in Chicago), a major casino company with sportsbook deals all over the country.

The deal will reportedly pay Sinclair $85 million, which could turn out to be chump change compared to what Bally’s could make as sports gambling becomes legal in more markets where Sinclair has RSNs. This leverage Sinclair gets by getting in to markets that sports gambling becomes legal is a huge get. Bally’s will put its brand on all of the RSNs, running marketing campaigns in all legal sports gambling markets. From Bally’s to Sinclair to the leagues themselves, all will benefit financially from this deal in a time where declines in sports across the board, both professional and collegiate, are taking hits with decreased revenue with little to no fan attendance and shortened seasons.

Yeah, you read that header right. Talk about getting innovative with new revenue streams. New Mexico State University is flexing into the liquor business with the first collegiate-licensed whiskey in the country. They partnered with Dry Point Distillers and have launched Pistol Pete’s Six-Shooter Rye Whiskey. The whiskey is now available for purchase in and around Las Cruces. A portion of the proceeds will go to support NMSU’s more than 400 student-athletes, according to the school. Dry Point Distillers is a locally-owned distillery in the area, so it’s a win-win for all local businesses where it’s been hard for most to survive, let alone thrive, during this time. College and alcohol, what a combination we always knew belonged together.

According to SSB, the Premier Lacrosse League cashed in on a major April Fools Day prank, bringing in $50,000 in just 24 hours. The league announced the arrival of an “eighth” team for its second season, the Beans Lacrosse Club.  And according to Front Office Sports, they didn’t skimp on any detail, creating everything from a logo, microsite, fan merchandise, heavy social media promotion, and a even formal press release. It marked the highest e-commerce store traffic day in league history by over 30%. The best part? The team’s Instagram and Twitter pages are still followed by more than 10,000 total users, and the league has continued to publish content on the Beans accounts. (If you’d like to send me a Beans Lacrosse Club sweatshirt, DM me on Twitter).

Recently, the Minnesota Vikings announced they would not allow fans to games in the stadium for the rest of the season, and they aren’t the only ones. With gate revenue serving as such a huge profit, it made teams rethink and reinvent ways to still bring in the dough.

With the NBA season starting up at the end of December, the determination of fan attendance is still not set in stone as COVID-19 cases continue to surge across the country. The Milwaukee Bucks, in anticipation of this reality, have teamed up with Populous, a major sports design and architectural firm to create a one-of-a-kind outdoor space for the upcoming season, according to CNBC. It’s creating a way for fans to watch the game outdoors, socially distanced, utilizing parking garages, shipping containers, and even creating a drive-in movie like experiences. Each “experience” will be leveled at different price points for fans who attend.

The first level will start with your standard tailgating parking spots with a view of the game. The next level of experience consists of fans parking their cars in a parking garage, setting up their own tailgates, and have an elevated view of the screens from five stories up, possibly including food and beverages. Other higher-price levels include suite-like layouts fitting 4-6 people.

Solutions like above, if approved, can help make up an integral part of the gameday costs in a safe, socially-distanced way and if done right, used beyond just this year.

The COVID-19 pandemic has presented a unique opportunity to rethink the way sport fans and brands participate in the making and sustaining of live events, shifting their efforts to keep fans engaged and revenue up, likely influencing how things will go when “normal” resumes. In the meantime, Harvey Keitel coined this fantastic phrase in the movie Youth; “I have to believe in everything in order to make things up.” On brand for surviving the year that is 2020, eh?