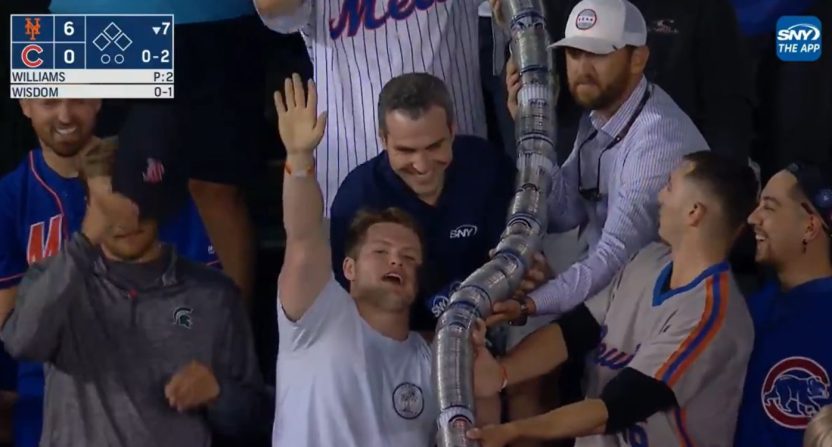 After a rough couple days, intermittently losing their video and audio feed during New York Mets broadcasts, Sportsnet New York stepped up and delivered one of their best segments ever.

The life of a field reporter isn’t always glamorous, and during Thursday night’s Chicago Cubs-Mets broadcast on SNY, Steve Gelbs was sent into center of Wrigley Field’s bleacher bums to learn about the beer snake. SNY waited until the seventh-inning for the segment, because to create the beer snake, you first need a lot of beer consumption. Waiting until the seventh-inning for a beer snake segment also means putting a lot of fans, who just consumed a lot of beer, on live TV.

“Hey, Jake, can you explain how the cup snake begins?” Gelbs asked of his new friend.

As soon as Jake referred to Gelbs as “Stevie,” the SNY audience knew they were about to be entertained. But before discussing the beer snake, Jake rattled off a list of family members as if he just spun the Big Wheel on The Price is Right.

“What is it, the eighth inning? Ninth inning?” Jake asked as Gelbs informed the beer-filled fan that it was only the seventh.

“Basically the eighth, Steve,” Jake responded in what was the line of the interview.

But as the seventh inning came to a close and SNY headed into a commercial break, disaster occurred. The snake collapsed. Not so surprisingly, it was the architect of the snake who was to blame, Steve’s good friend Jake. Jake took his eyes off the snake for a moment and seconds later he was left to clean up the mess of cups that were piled on the floor a few feet in front of Gelbs.

1. I did not break the cup snake, Jake in the bleachers did.

2. Jake in the bleachers made up for it with a fantastic interview explaining the cup snake.

Surely, they will rebuild. But it will have to wait until Saturday, with Friday’s game getting rained out. Think of how big the snake can get with a doubleheader’s worth of beer cups! Assuming Jake doesn’t take his eyes off it this time.