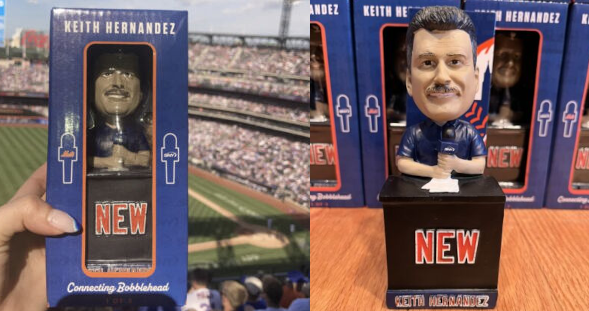 The SportsNet New York Mets‘ broadcast booth of Gary Cohen, Keith Hernandez, and Ron Darling is often good for a laugh, from takes from Cohen and Darling on unusual ballpark food through stories on Hernandez’s cats and time on Seinfeld through the time they blue themselves. The latest example of that came during Tuesday night’s SNY Mets-Braves broadcast. There, a discussion of the announcers’ bobbleheads the Mets are releasing this season (the Mets handed out Hernandez bobbleheads Saturday, as seen above from a pair of eBay listings offering them for $119.91 to $129.99 apiece, with Darling ones to follow on August 13 and Cohen ones to follow on September 17) took quite a turn. The discussion started with talk about it being Tyler Matzek bobblehead night for the Braves, and with Cohen saying that couldn’t live up to Hernandez’s bobblehead, which led into questions about how the three announcers’ bobbleheads will eventually connect:

A SNY discussion of magnetic bobbleheads, personalities, and ex-wives Tuesday started with talk on how those bobbleheads would connect. "Definitely trying to pound the square peg into a round hole." pic.twitter.com/eMnCwAshRl

Here’s a transcript of that, via TVEyes:

Cohen:  “I know that Tyler Matzek bobblehead doesn’t quite have the cache of the Keith Hernandez bobblehead that they gave away Saturday at Citi Field, but for the Braves’ fans, Matzek was a big hero for them last year.”

Hernandez: “Hard to match the Gary Cohen bobblehead that comes out in September.”

Cohen: “That is in the middle of the pennant race.”

Hernandez: “We’re going to be in the middle, we will connect to you, Ronnie and I.”

Cohen: “Is that how that works? I still have no idea, I have not seen that. I couldn’t figure it out. Because there is no connecting device on your bobblehead. Are they magnetic?”

Hernandez: “I have no idea.”

Hernandez: “I thought it was like trying to fit a circle into a square.”

Cohen: “Definitely trying to pound the square peg into a round hole, or vice versa.”

This then got better still. They went back to the game to call Duvall striking out, but then after the first pitch to subsequent batter Orlando Arcia, Hernandez returned to the bobblehead discussion, and that led into a discussion of his personality and his ex-wives.

After confirmation the bobbleheads were magnetic, this led to Gary Cohen saying “Just like your personality, magnetic,” and Keith Hernandez saying “Tell that to my two ex-wives!” pic.twitter.com/3u74wO0Zek

Hernandez: “Not to belabor a point, but I just heard from our lovely Ellie from SNY, our PR [rep]. They are magnetic.”

Cohen: “Just like your personality, magnetic. Slider, low and in to Arcia. One and one.”

Hernandez: “Tell that to my two ex-wives!”

Cohen: “We could all tell stories! But let’s not!” Cohen then returns to trying to call the game while stifling laughter.

Amazingly, this is not the first time discussion of Hernandez’s “magnetic” personality appeared on SNY this week. That also came up during a “He’s Keith Hernandez” special that aired Saturday afternoon before the game where his bobblehead was released, with Mets’ radio voice Howie Rose describing Hernandez that way.

And this came after Howie Rose described Hernandez’s personality as “magnetic” in a SNY feature Saturday. So lots of magnetism going on here. pic.twitter.com/6408alazFJ

“There are people who have a certain magnetic part of their personality that whenever they walk into a room, everybody’s attention is drawn to them. Keith is that kind of person. There aren’t many people you come across like that in life. Keith Hernandez is clearly one of them.”

So Cohen and Rose agree on Hernandez’s personality being as magnetic as his bobblehead. Even if Hernandez’s ex-wives may differ.