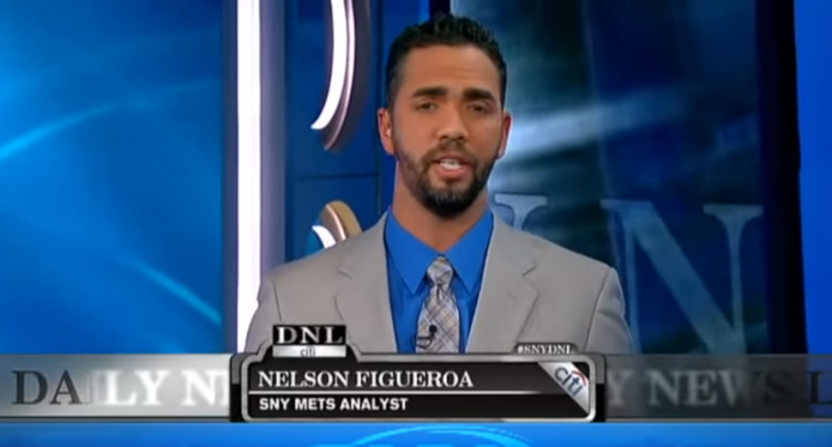 It’s certainly not particularly common to see a network fire an analyst in the middle of a season, and it’s even more uncommon to see that firing play out the way it did with SNY and Nelson Figueroa. The 45-year-old Figueroa (who had a long playing career as a pitcher with several MLB teams, in the minors, and in foreign leagues) had worked for SNY since 2015 as a Mets’ analyst, but as Andrew Marchand of The New York Post reported Friday, the network parted ways with him Friday after an incident Thursday night.

Figueroa was let go Friday morning after he showed up Thursday in what was described by sources as a state not fit to work. Figueroa allegedly demanded to still appear on SNY’s evening program, “Baseball Night in New York,” but was not permitted to appear.

An SNY spokeswoman confirmed that Figueroa is no longer working at the network. She declined to provide further details.

In a later piece, Bob Raissman of The New York Daily News provided more context on the recent history between SNY and Figueroa:

Anxiety, pressure, and maybe some anger, has been residing inside the pit of Nelson Figueroa’s stomach long before SportsNet New York brass fired him on Friday.

For the record, as reported by The Other Tabloid, Figueroa, the former major league pitcher who had been with SNY since 2015 as its primary studio analyst, was dumped a day after coming to work Thursday in a discombobulated state, which his bosses believed prevented him from working on the network’s “Baseball Night in New York” program.

…Two other sources said Figueroa wasn’t “in a good state of mind” to go on the air. “He was really upset,” one source said. “For his own good someone took him into a room to calm him down.”

…By the time Thursday rolled around, Figueroa had every reason to believe, whether it was true or not, that SNY had already greased the skids for his departure. It’s not a reach to suggest someone was messing with his mind.

Raissman goes on to detail how Figueroa was either demoted or passed over four times this year, first losing his spot as SNY’s primary Mets’ studio analyst to Todd Zeile, then losing the chance to fill in on game broadcasts during Ron Darling’s leave of absence to Zeile, then losing the chance to replace Zeile in the studio to Jim Duquette, and then learning that he wouldn’t receive studio dates during this week’s Mets-Diamondbacks series and that another analyst would be brought in.

So it does seem like the network had become less impressed with Figueroa this year after years of featuring him prominently, and perhaps this move was coming even without this “state not fit to work” or “discombobulated state” event Thursday. But that certainly seemed to push it over the top. And it led to quite an unusual exit.

[The New York Daily News; screencap from SNY on YouTube]